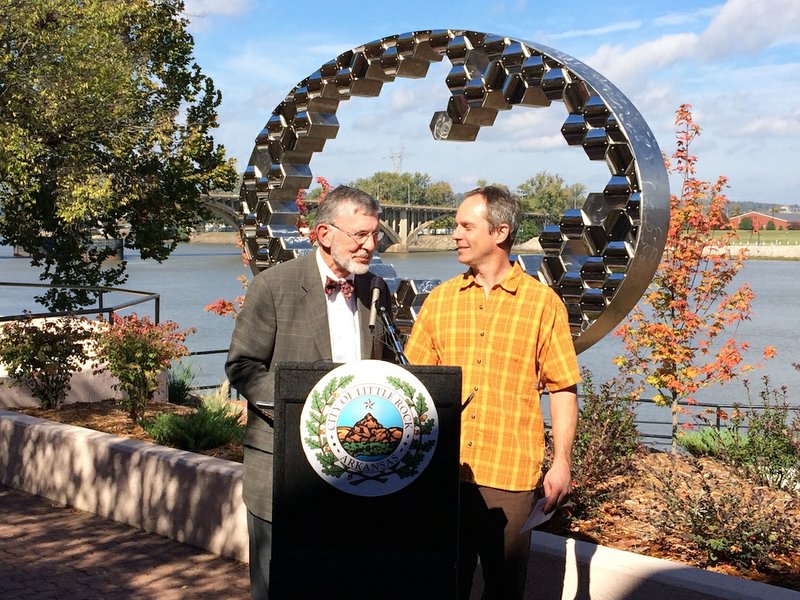 City Director Dean Kumpuris stands with sculptor Mark Leichliter at a Monday morning dedication of Leichliter's sculpture, "Through the Looking Glass," in the Vogel-Schwartz Sculpture Garden.

A new sculpture representing the Little Rock community was added to the Vogel-Schwartz Sculpture Garden on Monday morning to honor a late Arkansas judge.

Mayor Mark Stodola and members of the Little Rock Board of Directors were on hand for the outdoor ceremony.

City Director Dean Kumpuris said Kay Arnold approached him earlier this year and said she wanted to do something to honor her late husband, Judge Richard Arnold, who served on the federal district and appellate courts for 25 years.

“I said, 'I think I have a special thing to do to go along with that idea,'” Kumpuris said. “This [sculpture] is for two great individuals — Richard and Kay Arnold. This is a very special day to acknowledge two special people.”

The sculpture, titled “Through the Looking Glass,” was created by Mark Leichliter and stands 8 feet tall and 12 feet wide.

Kay Arnold is the former Vice President of Public Affairs for Entergy.

Leichliter said the sculpture took about five months to complete, and it’s his second piece to be featured in the Vogel-Scwartz Sculpture Garden.

“I was trying to have a way for Little Rock to see itself ... I messed with the idea of reflections,” Leichliter said. “On one side, it has a reflection that’s a single [piece]. It represents the community and how it works as a whole.

"On the other side, it’s all broken up into individual [pieces] and that represents the individuals of the community and how they work together to make it work,” he said.

Margaret Clark is the widow of William E. “Bill” Clark, after whom the wetlands along the Arkansas River near the Clinton Presidential Library are named, Gonzalez said.

“Bill and Margaret have been long-time supporters of Little Rock’s downtown and public art,” Gonzalez said. “Margaret contributed to the construction of the playground area to honor and continue Bill’s commitment to civic and charitable work."