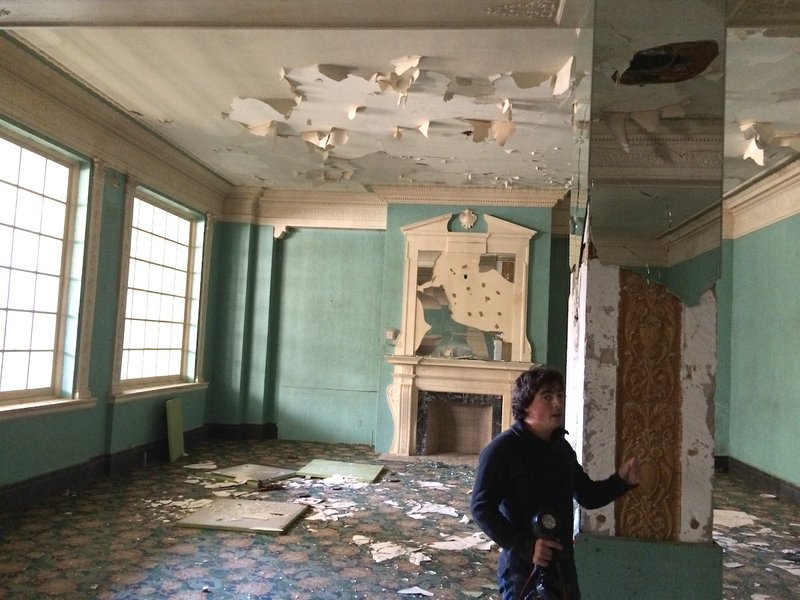 Michael Schwarz of Abandoned Arkansas explores the Majestic Hotel in downtown Hot Springs. His group explores abandoned buildings throughout the state to learn the history of what used to happen in them.

Finding abandoned schools, hospitals, hotels and amusement parks is Michael Schwarz’s passion. He seeks out what others might see as an eyesore or something that should be demolished and learns everything he can about the place with his group, Abandoned Arkansas.

Schwarz, 21, said he started the group in September 2012 when he enrolled at the University of Central Arkansas in Conway.

“I had explored some abandoned buildings back in Oklahoma, and I saw that there was an abandoned hospital in North Little Rock,” he said. “I just kind of went and took some pictures and made a Facebook page.”

Schwarz, originally from Oklahoma City, said his friends started “liking” his page on Facebook, and he, Eddy Sisson and James Kirkendall began searching for more abandoned placed around the state.

“I just ended up making a website, and it just kind of blew up one day,” Schwarz said. The Abandoned Arkansas Facebook page now has more than 10,000 likes.

When the group was first formed, Schwarz said he and his friends would just drive around looking for places to explore.

“As our fan base kind of grew, we started getting suggestions,” he said. “So we’d usually just drive there and find other places along the way.”

Of the many places the Abandoned Arkansas group has explored, Schwarz said his favorite location has been the Majestic Hotel in downtown Hot Springs, which partially burned Feb. 27.

“Ever since I first stepped into the Majestic, it’s just been my absolute favorite,” he said. “It was just a huge hotel that had everything left behind: old furniture, Persian rugs, light fixtures, old chandeliers, the original ceiling in the lobby. It’s absolutely beautiful on the inside.”

Schwarz said something like a fire in an abandoned building like the Majestic emphasizes the work his group does.

“We don’t take these pictures just to say, ‘Hey, look at these cool pictures we took.’ We want to be able to document them and preserve them if something like the Majestic [fire] were to happen.”

The group’s main mission is to preserve places that “time has forgotten."

“I know a lot of people who pass by one place, two places on their way to work and they always wonder what’s inside or what’s the story behind that place,” Schwarz said. “I think that’s what I love about this—being able to share those stories.”

When the group explores a location, Schwarz said the team uses clues from around the building to figure out when it became abandoned.

“We go inside and try to find out the history by what’s left,” he said. “Different things can give you clues. A lot of times you’ll find a place and there’s not a sign on the outside to say what it was.”

Receipts, calendars and files in the building can provide a window to the day the building closed and what used to be housed there.

Next on the agenda for Abandoned Arkansas is an abandoned elementary school in Winslow, according to Schwarz.