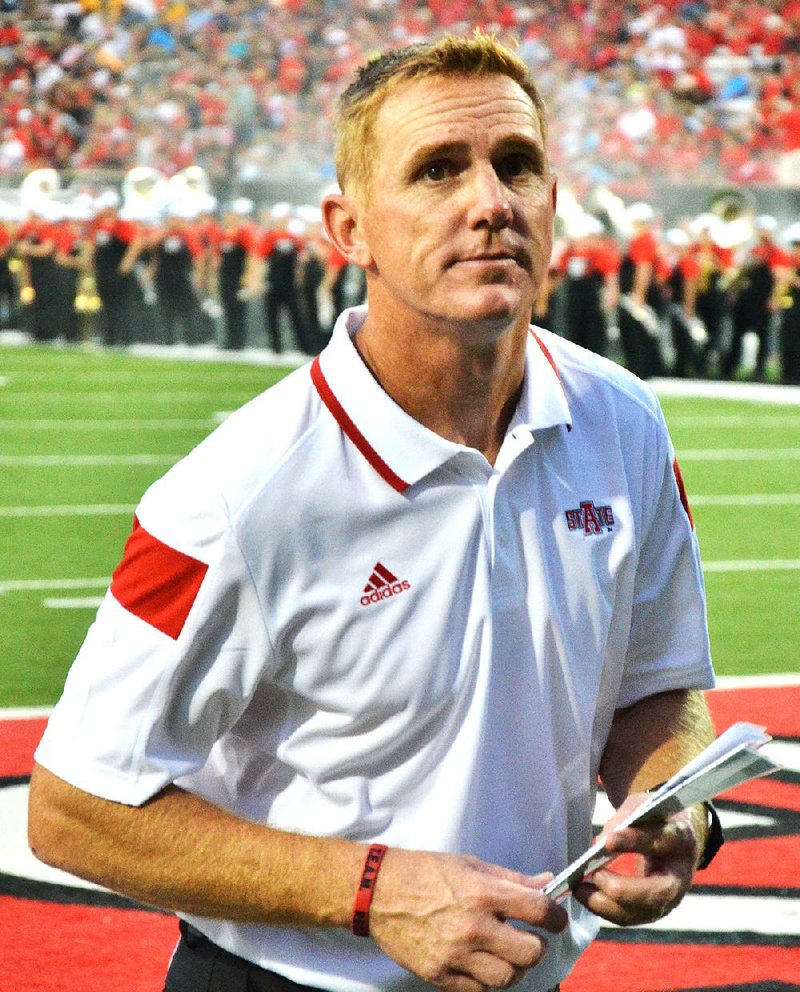 Special to the Arkansas Democrat-Gazette - 8/30/14 - Arkansas State head coach Blake Anderson walks off the field after the second quarter of the Red Wolves season opener at Centennial Bank Stadium in Jonesboro on Aug. 30, 2014.

Gordon participated in ASU's light workout Sunday and Anderson said Monday that he should be fine for today's practice after missing the final three quarters of Saturday's victory over Montana State with bruised ribs.

Bell said Gordon should be "100 percent" by Saturday's 11 a.m. kickoff at Tennessee.

Count Gordon's return as the season's first sigh of relief from the ASU coaching staff.

Gordon's second carry Saturday went for a 42-yard touchdown around the right end and gave ASU a 7-0 lead, but he carried the ball only six other times and spent the rest of the game watching with ice wrapped around his ribs. Anderson said Monday he was preparing himself for bad regarding the status of Gordon and linebacker Qushaun Lee, who also suffered bruised ribs but returned to Saturday's game,.

"I fully expected that we might hear that we would lose them," Anderson said. "Both were much better than they expected. ... Encouraged that both of them should be able to play and play well. We need them both. They're both key parts in what we do."

Tight end Kenneth Rains also went down Saturday, with a knee injury, and an MRI is scheduled for today. Anderson said Rains is for sure out for Saturday's game and expects him to be out for "a couple of weeks."

Safety Money Hunter, who took a blow to the head, should return, as should receiver J.D. McKissic, who suffered a thigh bruise.

Anderson, who is already operating with a thin roster that required him to play 12 true freshmen in the opener, took the injury updates as good news.

But Anderson said Gordon, who finished with 7 carries for 68 yards and 1 touchdown, likely won't take any hits except during pass protection drills.

"We've got to be smart," Anderson said. "We can protect him and still get good work done during the week. Scout- team guys are never going to run into Mike Gordon. If he does, he probably won't be taking any more snaps."

Four backs picked up for Gordon.

Bell said the experience gained by the backups will be helpful when they are called on again.

"They may not have the same pop that Mike does -- you saw what Mike looks like when he opens up and really goes -- but they all had great reps," Bell said. "Now, did we miss him? Yeah. But there were some young guys that were able to get in there and play."

Bell and Anderson said they hope to rely more on Gordon against Tennessee, which held Utah State to 244 total yards in Sunday's 38-7 victory at Neyland Stadium in Knoxville.

Anderson said he is hoping to speed up ASU's fast-paced offense to neutralize what is expected to be a more talented opponent in a hostile environment. An announced Neyland Stadium crowd of 102,455 watched 14 true freshmen play in Tennessee's victory Sunday. Those freshmen were part of a class signed by Butch Jones in February that was ranked No. 5 nationally by Rivals.com.