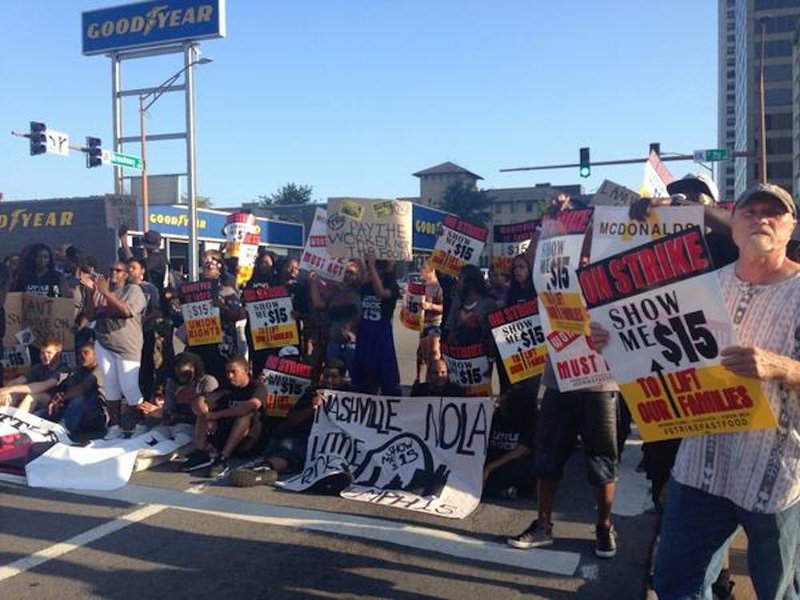 Officers got a call from protesters about 8 a.m. and responded to ensure order. By that time, demonstrators were blocking the thoroughfare at Seventh and Broadway, eventually moving to Third and Broadway, where some were arrested.

“To my understanding they are protesting the minimum-wage law,” Little Rock Police Department spokesman Lt. Sidney Allen said in an emailed statement. About 50 to 60 were demonstrating peacefully, Allen said.

Hundreds of workers from McDonald's, Taco Bell, Wendy's and other fast-food chains were expected to walk off their jobs Thursday, according to labor organizers of the latest national protest to push the companies to pay their employees at least $15 an hour, The Associated Press reported.

Twanna Scales, 36, of North Little Rock says she makes only $800 a month, with no benefits, and is supporting three sons.

"It's really a struggle out here," she said, noting that workers have to become managers to be offered benefits.

Some of the protesters chanted, "Make our wages super-sized," before they started to walk down Broadway, moving north from Seventh Street to Third. Traffic started to become clogged during the morning commute downtown.

By 8:50 a.m., police told protesters their demonstration amounted to unlawful assembly and if they did not move, they would be charged. Officers warned protesters three times to get out of the street and onto the sidewalk before they started making arrests shortly thereafter. Allen said 11 were arrested on disorderly conduct charges, adding that all have been cited and released.

The protest was over by about 9 a.m., with demonstrators saying, "We'll be back" as they loaded onto a bus headed to protest in Memphis.

Protests were planned at fast-food restaurants in about 150 cities nationwide to draw attention to the "Fight for $15" campaign, which is backed financially by the Service Employees International Union and others. Police handcuffed several protesters in New York and Detroit on Thursday as they blocked traffic.

In New York, at least three people wearing McDonald's uniforms were hauled away by police officers after standing in the middle of a busy street near Times Square. About two dozen protesters were handcuffed in Detroit after they wouldn't move out of a street near a McDonald's restaurant. In Chicago, a couple of buses unloaded a group in front of a McDonald's restaurant, chanting "Stand up. Fight Back," while 100 people crowded on the sidewalk. 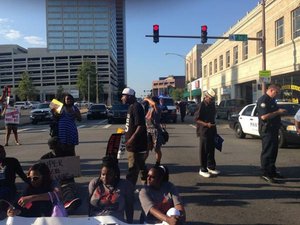 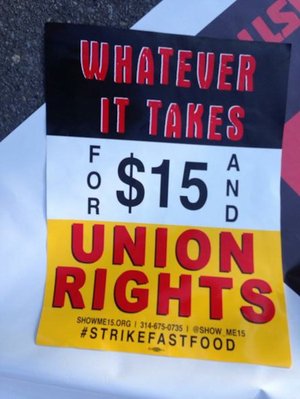 Information for this article was contributed by Katie Doherty and Ashley Nerbovig of Arkansas Online, Jessica Seaman of the Arkansas Democrat-Gazette and by The Associated Press.