A Benton man was arrested Thursday morning after he was involved in a fight at the old Saline County Airport, officials say.

At about 10:24 a.m., Benton police officers were dispatched to the former airport on Airlane Drive for a disturbance.

Robert Runyan, 69, of Traskwood and James Dougherty, 65, of Benton were flying model airplanes at the old airport when they got into an argument about their model airplane club, Benton Police Department Lt. Kevin Russell said.

The two men were arguing when it turned into a physical altercation, he said.

Witnesses told police that Dougherty said he was going to get a gun from his vehicle, when Runyan grabbed him from behind.

Dougherty fell on the ground and twisted his leg while the two were fighting, Russell said. Witnesses also said Runyan choked Dougherty during the fight.

Dougherty was transported to Saline Memorial Hospital for treatment of his injuries and cited for disorderly conduct and terroristic threatening. Runyan was arrested and charged with disorderly conduct, carrying a prohibited weapon and aggravated assault, Russell said.

A butterfly-style knife was found in Runyan’s possession, Russell said.

“It’s not illegal to have one of these knives, but it’s illegal under state law to have them on your person,” he said.

Runyan was not listed on the Saline County sheriff’s office online inmate roster as of Friday afternoon.

The investigation is ongoing, and anyone with additional information is asked to contact the Benton Police Department at (501) 778-1171 or (501) 315-TIPS. 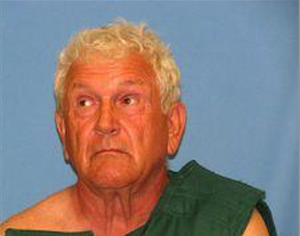