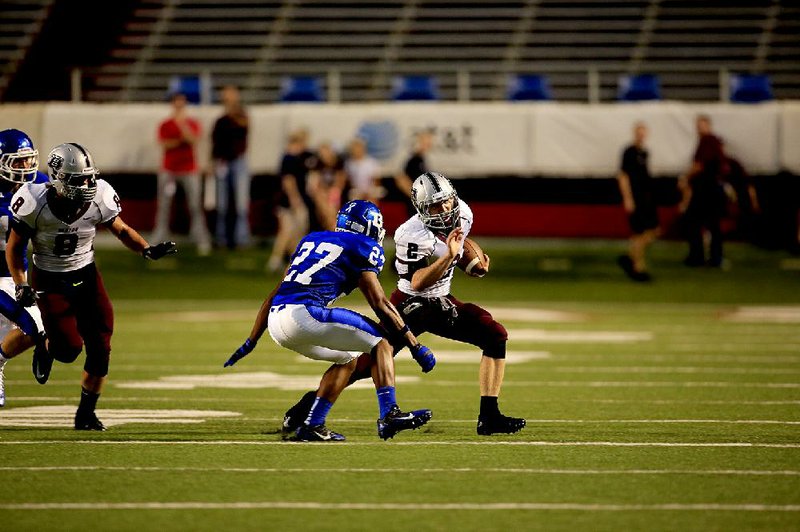 Benton’s Drew Harris (2) tries to run past Bryant defensive back Steven Murdock during the Panthers’ 14-14 tie with the Hornets on Friday at War Memorial Stadium in Little Rock.

No one carried the Salt Bowl Trophy home Friday night.

Saline County rivals Benton and Bryant battled to a 14-14 tie in a game that featured an emotional final few minutes in front of a crowd of 24,816 at War Memorial Stadium.

Benton, which had lost eight consecutive to its I-30 rivals, had the last gasp, but Casey Maertens' pass to the goal line was intercepted by Steven Murdock, who returned it to the 30 as time ran out.

Benton's final possession was set up when Stone Paul intercepted Gunnar Burks at the Panthers 40 with 1:37 left.

Benton's offense got moving on a face-guarding penalty, then a 15-yard pass to Drew Harris to set up first-down at the Hornets 42 with 35 seconds left.

A completion to Sam Baker gained 5 yards, but the Panthers were out of timeouts ended up with a desperation heave to the end zone on the final play.

Benton did not allow Bryant inside the Benton 40 in the final 24 minutes.

The Panthers' best second-half drive ended inside the Bryant 10 when Drew Tipton deflected a pass and teammate Kyle Lovelace intercepted with 6:46 left in the third quarter.

Benton went up 7-0 on its first drive, but Bryant scored on consecutive possessions to take the lead.

Kylon Boyle completed a 27-yard scoring drive on a 6-yard run with 8:38 left in the half. Ben Bruick's interception and 43-yard return set up the drive. Alex Denker kicked the extra point for the 14-7 lead.

Benton drove 68 yards in 8 plays on its first possession, with Maertens hitting Casey Green with a 14-yard scoring pass with 8:46 left in the first quarter. Hinze hit the extra point.

Boyle's 3-yard run with 33 seconds left in the first quarter tied the game. The score was set up by a 33-yard scramble by Brandan Warner to the 3. Denker kicked the extra point for a 7-7 score.