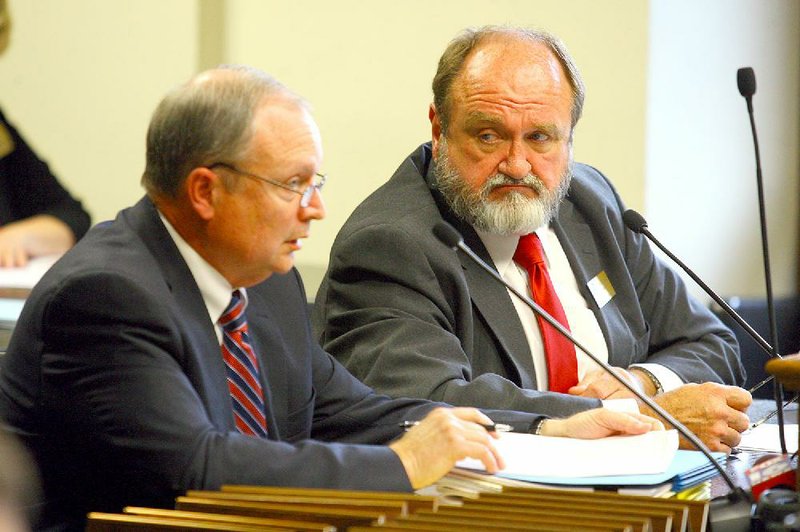 Jacksonville area residents going to the polls for the Sept. 16 schools election will make history with their votes on whether to carve a new Jacksonville/North Pulaski school district out of the existing Pulaski County Special School District. 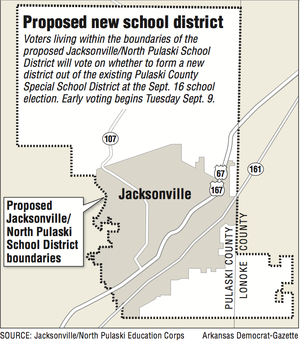 A map showing the location of the proposed new Jacksonville/North Pulaski School District.

Regardless of the outcome -- proponents are confident of a victory -- an election on detaching a portion of an existing district to form a new district is unprecedented in the state.

"This has never been done," said Patrick Wilson, an attorney for the Jacksonville/North Pulaski School District Education Corps, which is leading the campaign for the new district. "The statute that allows the detachment wasn't even passed until the early 2000s. This is going to be a first."

The Arkansas Board of Education ordered the election in response to a petition signed by more than 2,000 voters seeking the new system. The state Education Board took the action after a federal judge in the 31-year-old Pulaski County school desegregation lawsuit agreed earlier this year that a Jacksonville district could be formed in accordance with requirements set out in state law.

"We want to keep our local tax dollars in our community," Daniel Gray, chairman of Jacksonville/North Pulaski School District Education Corps, said about a new district that would serve an estimated 4,000 students.

"We want to be able to expand our curriculum," Gray said. "We want to address our facilities in a much faster way. We want to make our own decisions. We want local control."

Only people living within the boundaries of the proposed district are eligible to vote on whether to detach from the Pulaski County Special district. Voters elsewhere in the county district -- including those in Sherwood, Maumelle, west Pulaski County and Wrightsville -- cannot vote on the measure that will reduce the size of their district.

However, even if approved, a new Jacksonville-area district would not be independently operable for at least one and maybe two years. Jacksonville-area schools would stay under the direction of the Pulaski County Special district -- which is now operating under state control and remains under federal court supervision of its desegregation efforts -- until the transition to a separate district is completed. That transition would include the transfer of some Pulaski County Special property, debt, equipment and personnel to a new district.

Pulaski County Special School District Superintendent Jerry Guess said he believes voters will approve the proposed detachment, but he has doubts that a new district can be ready to operate independently by July 1, 2015.

"There is going to be nine months after the election, and I don't think you could do all the planning and implementation necessary for them to stand alone as a district in July 2015," Guess said.

"We're talking. We are trying to nail down critical issues that need to be addressed, but I don't think they can be ready, and I don't think we can be prepared to adjust," he said about severing the two districts in a single transition year. "It's my position that the rest of this year and 2015-16 are necessary to get everything lined up."

"That's a lot of very important detail, and I think it is very, very important for them and for us that they embark successfully on this journey. That will take careful planning and preparation."

The existing Pulaski County Special district employs about 3,000 and has an enrollment of 17,300 students in 36 schools. The district, which encompasses 729 square miles, was created in 1927 by a legislative act that combined 38 independent school districts into one district, according to district records.

Depending on the outcome of the Sept. 16 election, Guess said, his district could be in the position of having to plan for a staff that is 75 percent of its current size. But talk about dividing the staff between two districts, Guess said, is premature at this point.

Pam Fitzgiven, a fifth-grade teacher at Oakbrooke Elementary in Sherwood and chairman of the Pulaski County Special district's Personnel Policies Committee for certified staff, said there is little discussion among teachers about the possible new district.

"I think they are waiting to see what happens with the vote," she said of teachers. "Once the vote goes through, we'll hear a bit more about it. Of course, they are prepared for it because they've known about it for a while."

Leaders in the campaign for a new district have offered assurances that teachers in the new district will be paid salaries that will be competitive with those in surrounding districts.

Wilson said the fact that the proposed detachment would be a first in the state causes some difficulties in figuring out how to accomplish the transition.

"We are definitely in uncharted waters," he said. "It's a bit intimidating, but also thrilling."

If the election vote is positive for a new system, the state Education Board this fall -- probably in October or November -- would issue an order creating the new district and appoint nominees to a seven-member interim board.

"The new district would exist at that point," Wilson said. "But our anticipation is that because the statute allows for a transition period of up to two years, we would still be operating under the administrative control of the PCSSD.

"But make no mistake about it, at the time that order is entered there will be a separate Jacksonville/North Pulaski district, and we will finally have our own district," he said.

In regard to forming an interim school board for the new district, the state Board of Education in August named a committee of elected representatives who serve the Jacksonville area to solicit applications from people willing to serve on the interim board. That application process closes at the end of this month. The committee, headed by Rep. Mark Perry, D-Jacksonville, will submit the committee's nominees to the state Education Board for approval.

The interim board and the interim chief executive would work to reach agreements with the Pulaski County Special district and the state on the transfer of schools, equipment, debt and personnel to the new system, Gray said.

Recent questions about exactly how the transfers would be accomplished are left largely unanswered, with Jacksonville area leaders and representatives of the district saying that those issues will be resolved after the vote.

"We are focused on Sept. 16 and getting a positive turnout," Gray said. "We want to send a clear message around the state to everybody watching this that those Jacksonville people are serious about this, and they are excited about it. We want the potential superintendent-designee or whatever we call that person to have the confidence that this community is really united behind this."

No organized opposition to the new district has stepped forward.

Bobby Lester, a retired longtime superintendent in the Pulaski County Special district and who is now actively supporting the formation of the Jacksonville system, said he has encountered questions and even rumors about who would go to what school in a new district and about possible school-building closures in a new district -- when, in actuality, no decisions have been made.

"A lot of decisions have been postponed because people didn't want to get a lot of [argument] going when we weren't even sure the election would pass," Lester said last week. "There have been a lot of questions asked that I said, 'We can't answer that until this election is over. We've got to win it first. Then we'll get down to talking about those things.'

"You've got to have trust in people that they will do everybody right, and I believe they will," he said about the postelection work. "I believe everybody has a good heart that is dealing with this."

Ten schools, including North Pulaski and Jacksonville high schools, are within the boundaries of the proposed district.