Marshals Museum on its way to fruition 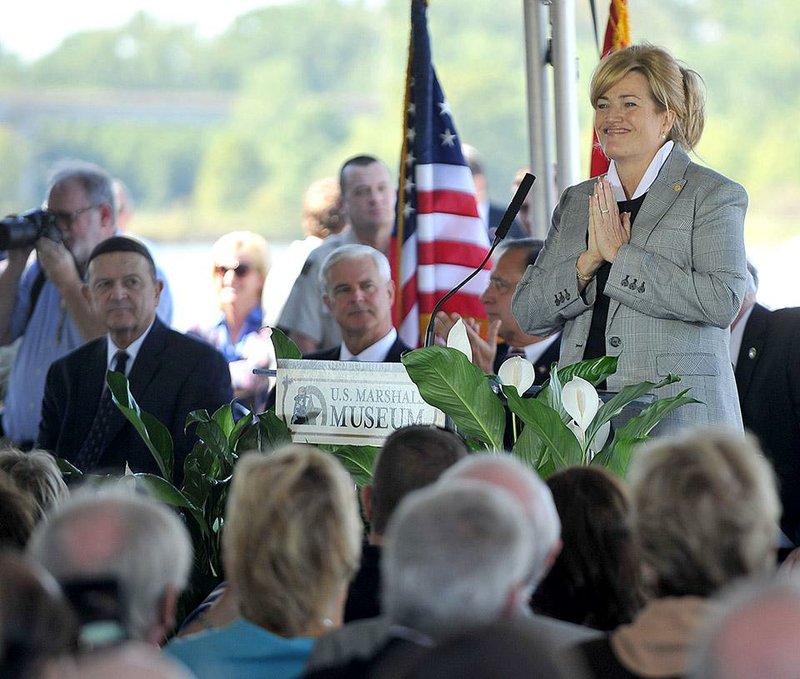 U.S. Marshals Service Director Stacia Hylton thanks everyone for their support of the new museum Wednesday during the groundbreaking ceremonies for the new U.S. Marshals Museum in Fort Smith on the 225th anniversary of the Marshals Service. The museum is scheduled to open in 2017.

FORT SMITH -- National, state and local officials gathered in a field along the Arkansas River on Wednesday to break ground on what U.S. Marshals Museum Board Chairman Jim Spears predicted one day will be the finest law enforcement museum in the country.

The groundbreaking for the $50 million, 52,000-square-foot museum was held on the 225th anniversary of the establishment of the U.S. Marshals Service by President George Washington.

"It's very appropriate that this groundbreaking is being held on Sept. 24," Fort Smith Mayor Sandy Sanders said in opening Wednesday's ceremony.

About 500 people attended the groundbreaking during which remarks were made by, among others, Arkansas' U.S. senators, Mark Pryor and John Boozman; 3rd District U.S. Rep. Steve Womack; Arkansas Gov. Mike Beebe; and Marshals Service Director Stacia Hylton. The crowd was served lunch at a community picnic on the grounds after the 90-minute ceremony.

The groundbreaking signaled the beginning phase of construction of the museum that will house hundreds of artifacts from the Marshals Service's 225 years and tell the agency's story.

So far, the museum foundation has raised $20 million. The latest windfall was a $5 million anonymous donation that was announced last week. Early next year, the U.S. Mint will put up for sale coins commemorating the Marshals Service's anniversary that museum officials believe will net the museum another $5 million.

As of Wednesday, museum foundation President Robert Young said the museum board has enough money to construct the building. It still needs to raise money for construction of the exhibits inside and for an endowment for ongoing operational expenses of the museum. Spears said museum project is proceeding on a pay-as-you-go basis.

Young said there are some encouraging prospects for additional large gifts, although he couldn't say when those gifts would come through.

"I think we're working a good plan and I think we'll get there in the not too distant future," he said.

An important part of the Marshals Service story, U.S. Marshals Service Association President Louie McKinney said, is the more than 250 marshals who died in the line of service and whose stories will be recorded in the museum's Hall of Honor.

"It is important that the most moving part of this museum will be the solemn reminder to all Americans that there is a price to pay for our system of justice," McKinney said.

Hylton recalled Wednesday the death of one of those marshals, William F. Degan, who was killed in a firefight in northern Idaho known as Ruby Ridge in August 1992. She introduced Degan's two sons, Billy and Brian, who were in the audience for Wednesday's groundbreaking ceremony.

The museum also will include a monument to tribal police, who were sworn as deputy marshals, from the Five Civilized Tribes and who died in the line of duty, said George Tiger, Inter-Tribal Council president and principal chief of the Muscogee (Creek) Tribe.

The Five Civilized Tribes, the Cherokee, Chickasaw, Choctaw, Muscogee (Creek) and Seminole, were under the jurisdiction of the Marshals Service during the 19th century, Tiger said.

Also in the audience were more than 100 retired marshals and their families who were in Fort Smith this week for the annual national Marshals Service Association conference. They received a noisy, standing ovation as they filed in to their seats at the front of the audience.

"I came to a groundbreaking and a pep rally broke out," Womack said of the retired marshals' reception.

The Marshals Service chose Fort Smith as the site for its national museum in January 2007, being selected over the other finalist, Staunton, Va. Fort Smith officials and volunteers had mounted a spirited campaign for the museum titled "Bring It Home," asserting the relationship with the Marshals Service in keeping the peace in the Indian Territory during the 19th century.

Hylton recalled the long-standing relationship that the Marshals Service has had with Fort Smith, saying Fort Smith was part of the agency's "DNA."

"I feel the Marshals Service and Fort Smith are woven into the fabric of our country's history," she said.

The Marshals Service had been looking for a permanent home for what had been a traveling museum put together in 1989 to observe the service's 200th anniversary.

After that anniversary, the museum's collections of hundreds of artifacts were stored in the lower level of the Wyoming Territorial Park's Horse Barn Theater in Cheyenne.

Since then, the museum board has continued to acquire pieces for the museum. In April 2011, an ancestor of famed U.S. Deputy Marshal Bass Reeves donated his badge and sidearm to the museum.

And in September 2012, it received part of a girder from one of the World Trade Center towers destroyed in the attacks on Sept. 11, 2001.

The Marshals Service collection was moved from Wyoming to Fort Smith in November 2007 and has been stored in an undisclosed location of the Arkansas Department of Parks and Tourism awaiting the opening of the museum, which is anticipated to be in 2017.

The site for the riverside museum is on land donated by the family of Fort Smith businessman Bennie Westphal, who is a descendant of Deputy Marshal W.P. Pitcock.

Architects Polk Stanley Rowland Curzon Porter Architects Ltd. of Little Rock and Cambridge Seven Associates Inc. of Cambridge, Mass., produced the design for the museum building. Its most distinctive feature is the roof in the shape of a five-point star symbolizing the marshals' badge.

Inside, the marshals' story will be told in three galleries. The Marshals Today will focus on its roles dealing with fugitive apprehension, judicial security, witness security, federal prisoner transport and asset forfeiture.

The Changing Nation Gallery will have exhibits on slavery and the legacy of inequality, the 1794 Whiskey Rebellion and labor strikes.

The Frontier Marshals Gallery will look at the shifting national borders since 1789, the American West, the Alaska Territory and new frontiers and the future.

Print Headline: Marshals Museum on its way to fruition