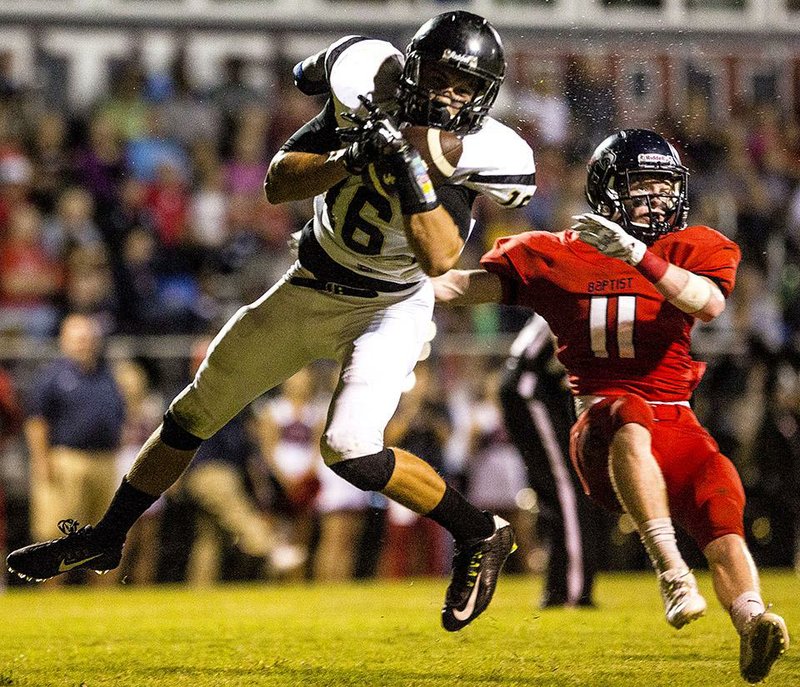 It was Hakeem Aldridge's turn to be Pulaski Robinson's playmaker in Friday night's 4-4A Conference opener.

The senior running back scored four touchdowns to lead the Senators to a 49-14 rout of Arkansas Baptist at Eagle Creek Field in Little Rock.

"We feel like we have a number of playmakers and that's what going to make this team a viable contender," Robinson Coach Todd Eskola said. "Any given night, any of them can be the go-to guy. Tonight, it was his [Aldridge's] night."

Robinson gained 345 yards, 316 of those yards on the ground.

"I followed my blockers and do what any running back can do," Aldridge said, "and running in the hole."

Arkansas Baptist Coach Brad Helm said the Eagles had no answer for Aldridge or the Senators.

"They're making the plays to win the game."

Robinson was held to two Steven Holmquist field goals -- 22 and 29 yards -- in the first quarter for a 6-0 advantage, but Aldridge took over in the second quarter with an assist from junior wide receiver T.J. Hammonds.

Hammonds ran 65 yards on 3rd-and-5 to set up Aldridge's 12-yard run on the next play to help Robinson extend its lead to 13-0 with 9:55 remaining in the second quarter.

Arkansas Baptist (1-3, 0-1) pulled within 13-7 with 4:29 left in the half on junior quarterback Cory McGonigal's 25-yard fade to classmate Ryan Fielder.

That was as close as the Eagles would get on Friday.

The Senators drove 63 yards in 10 plays in 4:20 as junior quarterback Brennen Johnson's 20-yard pass to senior Blake Burks set up Aldridge's 4-yard touchdown run and ensuing two-point conversion run to make it 21-7 Robinson with nine seconds left in the half.

Robinson went to Aldridge again on its first drive of the second half and he scored on a 10-yard run to extend the lead to 28-7.

Robinson senior Marcus Devine sacked McGonigal on Arkansas Baptist's next drive, forced a fumble and senior Hunter Hudson recovered to give the ball right back to the Senators.

Aldridge's fourth touchdown, a 7-yard run, made it 35-7 with 4:17 remaining in the third quarter. Johnson's 16-yard touchdown run with 3:14 left in the quarter increased the lead to 42-7, applying the Arkansas Activities Association's sportsman rule.

Burks added a 63-yard interception return for a touchdown for a 49-7 lead to end the third quarter.

Hammonds rushed for 113 yards on 10 carries. Johnson rushed for 83 yards and 1 touchdown on 9 carries and completed 2 of 4 passes for 29 yards. NaQuon Manley added 28 yards on 4 carries.

McGonigal completed 13 of 20 passes for 145 yards with 1 touchdown and 2 interceptions. Andre Maloy rushed for 38 yards and 1 touchdown on 9 carries.

NASHVILLE — LaMichael Pettway scored three touchdowns, two on interception returns and one on a 36-yard pass from Leonard Snell, as top-ranked Nashville (4-0, 1-0 7-4A) defeated Arkadelphia (3-1, 0-1).

The Scrappers started and finished strong. Lucas Liggin grabbed a 7-yard pass from Snell with 9:03 left in the first quarter to give the Scrappers a 6-0 lead. Snell scored from 2 yards out with 10:24 left in the second quarter to extend Nashville’s lead to 12-0 before Darius Hopkins ran for a 27-yard touchdown with 6:14 left in the half to make it 18-0. Arkadelphia finally got on the board with 39 seconds left in the second quarter on Jeff Blake’s 18-yard pass to Wriley Cooper to pull the Badgers to within 18-7.

CROSSETT — Senior running back Kilay Cox rushed for two touchdowns, including a 57-yard scoring run in the decisive fourth quarter, to lead Warren (2-2, 1-0 8-4A) over Crossett (2-2, 0-1). Senior quarterback Justin Gorman added two touchdown passes for the Lumberjacks, including a 25-yard fourth-quarter score to senior receiver Jaylon Marshall. His other touchdown pass went 10 yards to Darveon Brown in the third quarter.

Garret Jeffers finished 19-of-41 passing for 268 yards with 2 touchdowns and 3 interceptions for the Billies.

MALVERN — Senior running back Monte Hernandez and junior quarterback Trace Collie each scored early touchdowns to spark Malvern (3-1, 1-0 7-4A) to a victory over Bauxite (2-2, 0-1). Hernandez scored the Leopards’ first touchdown on a 5-yard run in the first quarter. Collie scored his team’s third touchdown on a 10-yard run.