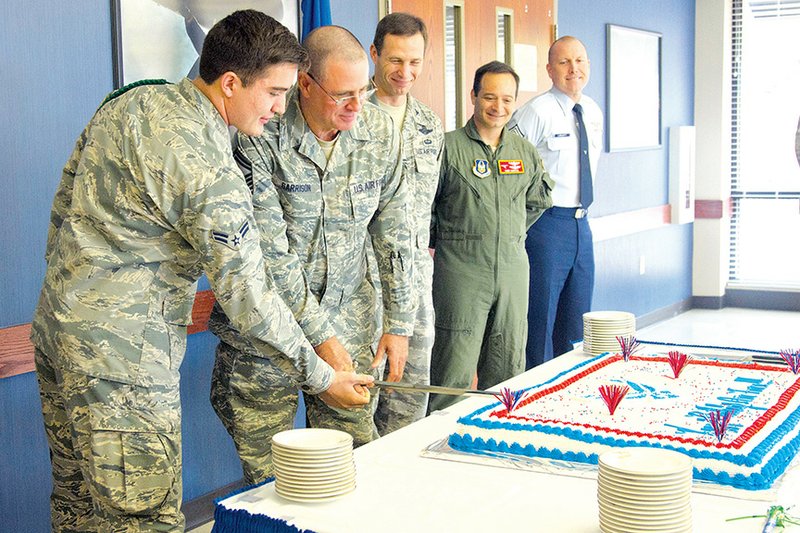 JACKSONVILLE — On Sept. 18, the United States Air Force turned 67 years old, and airmen at the Little Rock Air Force Base celebrated with a symbolic cake-cutting tradition that shows the heritage that passes between generations. The U.S. Air Force became a separate military service when President Harry S. Truman signed the National Security Act of 1947 on Sept. 18, 1947, and airmen across the country celebrated last week the anniversary of that event.

After a rousing rendition of “The U.S. Air Force Song,” during which airmen declared “nothing can stop the U.S. Air Force,” the oldest and youngest airmen at the Little Rock Air Force Base — Airman 1st Class Vincenzo Galegos and Senior Master Sgt. Steven Garrison — cut the birthday cake with a saber.

Galegos, who is 19, said his family’s history of service is what made him decide to join the Air Force. His grandfather served as a Navy corpsman during World War II in the Pacific theater, and Galegos’ uncle was a member of the Security Forces before the forces combined with law enforcement.

Galegos signed up for the Air Force when he was 17, so because of his young age, he needed his parents to sign the paperwork for him to join.

“I signed my contract the day I graduated high school,” he said. “I left three weeks later and started basic training.”

He said he had “the extended long tour” of basic training because he broke his ankle during his training. He is currently waiting to begin loadmaster training with the 314th Training Squadron.

“I’m just happy to be part of this Air Force,” Galegos said. “I feel it’s been really great to me, and I’m excited to start my career here soon.”

Garrison, who is a 189th Airlift Wing human resources adviser, said his desire to serve in the Air Force started with his father, who signed up with the Army Air Corps in 1943. Garrison’s father was stationed out of Italy and planned on making a career out of his time in the military, but his father’s plan was ended by hostile fire that hit him in the right elbow over East Germany.

“He lived his life with the sign of his service,” Garrison said. “He was a very humble man, however, and did not talk a whole lot about that with folks.”

That heritage influenced Garrison to join the Air National Guard. In 1986, he went to basic training, where he celebrated his 31st birthday. He was a teacher, and he said he drew on that experience to help the other airmen going through basic training.

“My frame of mind was different, and I tried to impart the wisdom I had to them to help them through,” he said. “At the end of the training, they told us our flight was the first flight in that squadron ever to make it through without a recycle, [when someone is sent back to repeat part of the training]. I’d like to think the wisdom that I imparted and the stability I showed helped some of those young airmen to get through that period.”

After basic training, Garrison worked as a civil engineer, in the chaplain service and as a paralegal before becoming a human resources adviser.

“I’m proud to stand here today to represent the U.S. Air Force and its proud heritage that started for me back in 1943 with my father,” he said. “It’s an honor to be able to serve our country.”