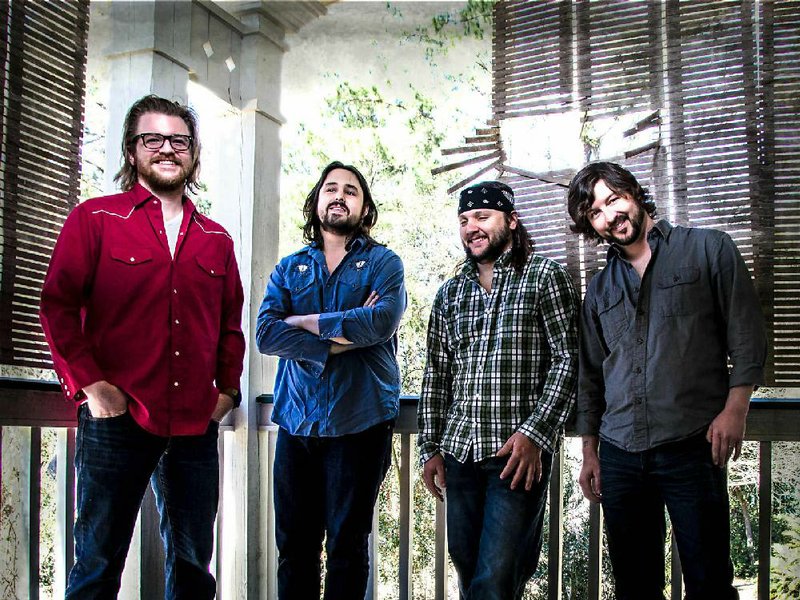 The Mulligan Brothers are not really brothers, but they do qualify as mulligan takers, both careerwise and Arkansaswise. (The word, popular among golfers, refers to an extra stroke taken after a poor shot.)

The Mobile, Ala.-based alt country, folk and blues band members, all of whom have been in other groups, are making up for lost time. And they are making up for a lost performance, returning to Wildwood Park for the Arts after bad weather ruined an October 2013 outdoor festival show.

Members are Ross Newell on lead vocals and acoustic guitar; Gram Rea on fiddle, mandolin, viola, harmonica and vocals; Ben Leininger on upright bass; and Greg DeLuca on drums and vocals. Newell writes most of the songs and sings them in a quiet, distinctive voice made more audible because he plays acoustic guitar, rather than electric, even at performances. Rea's fiddle is as much a lead instrument as Newell's guitar, adding to the band's unusual sound, a mix of bluegrass, folk, blues and basic singer-songwriter sounds.

And just as a couple of other Alabama acts -- Jason Isbell and Alabama Shakes -- have been getting acclaim of late, so have the Mulligan Brothers, whose debut, self-titled album was named "Alabama Album of 2013" by Mod Mobilian, a cultural website in the band's homeland.

"We've only been together a little over two years," drummer DeLuca says, "which was right about when we did our first album, and now we have our second one, Via Portland, which came out in January. We had all paid our dues, so to speak, in other bands, so when we all got together, we were ready to get a jump on things and hit the ground."

DeLuca explains that Via Portland takes its name from the band's sojourn to that Oregon city at the invitation of producer Steve Berlin, who is also known as a multi-instrumentalist in Los Lobos.

"Steve had heard our first album and he expressed an interest in working with us," DeLuca says. "He invited us to come out to Portland to see what would happen, and so off we went, playing some shows along the way. It was a very enjoyable experience and we learned a lot about recording, how each of our roles worked and how to come up with ideas.

"We do focus on the lyrics, which makes a difference. Ross is a great storyteller, and we all have our hands in the process."

And with what the Mulligan Brothers have learned after years of playing the Gulf Coast club circuit -- including the famed Flora-Bama Lounge, built on the Florida/Alabama state line -- the band is proud to note that not only was it invited to perform at the 2014 New Orleans Jazz & Heritage Festival, but it was invited to return this year -- a somewhat rare event.