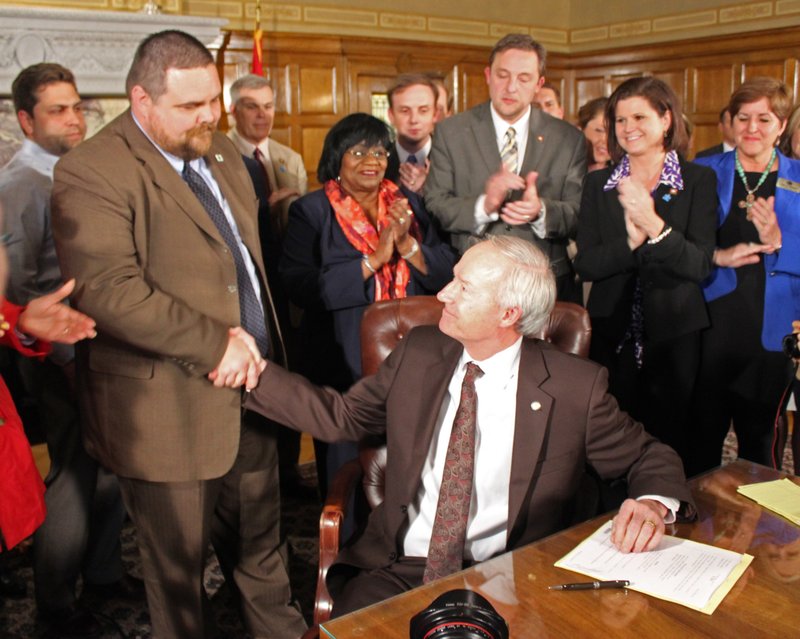 Gov. Asa Hutchinson on Thursday signed a bill that closely aligns state law with the federal Religious Freedom Restoration Act a day after he asked lawmakers to make changes to a different religious-protection bill that many criticized as discriminatory.

The Arkansas House voted 76-17 to pass Senate Bill 975, which cleared the Senate late Wednesday and made it out of the House Judiciary Committee earlier Thursday.

SB975 is seen as a replacement for House Bill 1228, a bill supporters said ensured state protections for religious freedom but opponents decried as enabling discrimination against gay people.

Hutchinson had said he would sign HB1228 but announced Wednesday after it made it to his desk that he wanted a change — either by amendment or new legislation — that brought the bill's intent closer to the language of the 1993 federal act, which was signed into law by President Bill Clinton.

Rep. Bob Ballinger, R-Hindsville and the sponsor of HB1228, said that first bill was "really good" legislation and that its application had been mired by incorrect perceptions rising out of controversy surrounding it and a religious-freedom bill that was signed into law last month in Indiana.

But Ballinger on Thursday still asked the House to pass SB975, which he characterized as one that accomplishes the same goal of "protect[ing] religion at a heightened scrutiny."

He said SB975 is "essentially the Federal RFRA."

"What we've done is Arkansas-ized it I guess and made apply to Arkansas code," he said. "The misconceptions and confusion about [HB1228] have caused enough problems that we thought we'd go back to the drawing board...go back to the essential purpose of bill to get a strict scrutiny standard. Our citizens when we're done are going to be protected."

Only one legislator spoke against SB975 from the House floor, Rep. Josh Miller, R-Heber Springs.

"We voted on a bill in this chamber four times that was voted on and approved four times, and it went to the governor's desk," Miller said. "And I for one do not appreciate someone hiding behind this body when they're unwilling to take a stand one way or another."

The House voted a short time after opponents and proponents of religious-freedom laws met on the state Capitol steps in dueling rallies.

Hutchinson praised legislators for working together to pass the new bill just over 24 hours after he requested the General Assembly amend HB1228 or pass different legislation.

"You have my thanks for your extra efforts for an Arkansas solution to a challenge that we face and I think what you've done in the last 24 hours is something that every Arkansan should be proud of," Hutchinson said to legislators gathered at the bill signing.

Protesters to any religious-protection bill have asked the governor for an executive order prohibiting discrimination against sexual orientation and gender identity, and Hutchinson said that is "still an option."

"Our full focus has been on this effort, this is the most critical piece of the puzzle," Hutchinson said of passing the Religious Freedom Protection Act. "...This debate goes on. The fact that it might not solve every problem for everyone probably means that it's a good bill."

As soon as Hutchinson signed the new religious-protection bill it became law because of an emergency clause attached to the legislation.

A motion by Ballinger in the House session to recall HB1228 passed on a voice vote Thursday afternoon.

"I don't like the idea of HB1228 being vetoed because...most know there wasn't anything wrong with 1228 except for the perception," Ballinger said.

Several representatives spoke against the motion, saying the body had followed the process of passing the original bill.

"The [House] speaker rightfully so told us to honor the right process, and we've gone through all the right motions and now we're having to recall a good bill," Rep. Donnie Copeland, R-North Little Rock, said.

Ballinger said he believed there could potentially be "negative repercussions" for not recalling the bill and got emotional as he urged the members of the House to end the session on a good note.

"We're finishing up 1228 with a bill that has now been signed into the law, that is the law in Arkansas right now," Ballinger said. "We have a strict scrutiny standard. Let's finish up, let's go home and get some sleep."

An Arkansas House committee has passed a bill Thursday that would closely align state law with the federal Religious Freedom Restoration Act.

The approval of Senate Bill 975 on a voice vote by the House Judiciary Committee came a day after Gov. Asa Hutchinson called on lawmakers to make changes either by amendment or new legislation to House Bill 1228.

Ballinger on Thursday presented SB975, noting that it closely "mirrors" the federal law and blaming unfair, negative perception for stalling HB1228. He called HB1228 a "really good" bill while noting that SB975's language is very similar to the federal law signed by President Bill Clinton and an Illinois law that President Barack Obama voted for when he was a state senator.

"It's a lot harder for individuals to see this for what it's not," Ballinger said.

He said the "fundamental purpose" of both bills is "to protect religion at a heightened scrutiny."

"This bill does that same thing," he said of SB975. "This bill provides those religious protections."

One woman, Jacque Martin of Quitman, spoke out against the new bill, saying HB1228 offered her protections to choose not to play piano at a gay wedding when SB975 would not.

"Quite honestly, at this point, I really don't think I can continue providing that service to my church, to my community and sharing my music," she told the committee members before the vote. "Because this has become about the LGBT movement instead of allowing me as a human being to have my own religious conscious and how my God leads me to live that out."

Martin said afterward that she is paid to play at functions once or twice a year and has never been asked to play at a gay wedding. But, she said, she believes it could be a larger issue for people in bigger cities in other parts of Arkansas.

A number of businesses, groups, politicians and protesters criticized HB1228 as enabling discrimination against gay people.

Hutchinson had previously committed to signing HB1228, but on Wednesday said he wanted lawmakers to pass a law closer to the federal version.

The Senate later that day passed Senate Bill 229 and SB975 first out of committee and then out of the full chamber, sending them to the House. Ballinger presented only SB975.

Hutchinson, who acknowledged even his son had signed a petition seeking to have him veto HB1228, wouldn't say if he would ultimately take that step if lawmakers didn't come up with a solution closer to the federal law.

Gov. Asa Hutchinson on Thursday signed Senate Bill 975 into law after requesting a day earlier for lawmakers to change a separate religious freedom bill to bring it closer to federal law. (By Gavin Lesnick)
[View Full-Size] 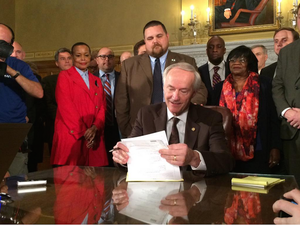 Photo by Danielle Kloap
Gov. Asa Hutchinson signs Senate Bill 975 into law in his conference room at the state Capitol on Thursday afternoon. 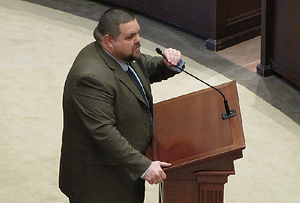 Do you agree with HB1228, Arkansas' Religious Freedom Restoration Act?