Religious conservatives: Will press on 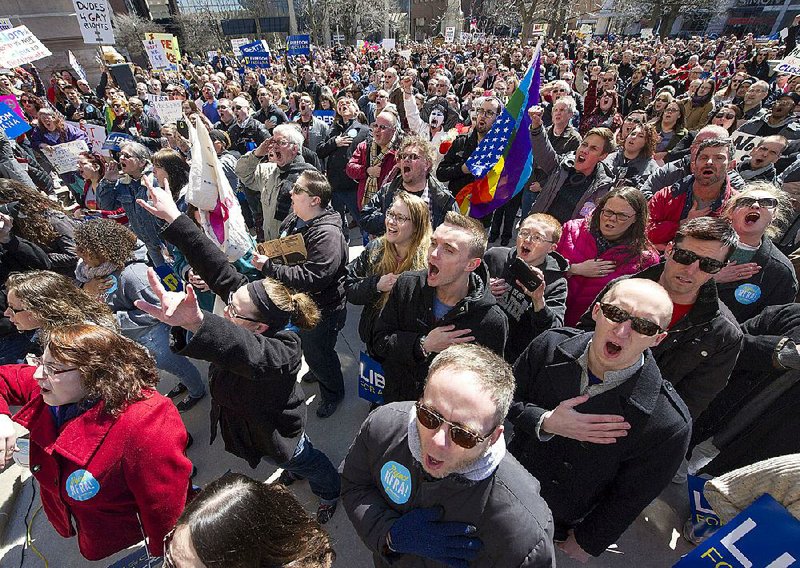 NEW YORK -- Conservative faith leaders have made religious liberty a rallying cry as gay marriage has spread throughout the states. And though stunned by Indiana's retreat from a religious-freedom law after an uproar over same-sex marriage, they vow not to give up.

Evangelical and Roman Catholic leaders say they will continue their push for conscience protections from laws they consider immoral -- a drive that gained momentum several years ago when they saw their beliefs on marriage, abortion and other matters increasingly in the minority.

Archbishop William Lori of Baltimore, who leads the religious-liberty committee of the U.S. Conference of Catholic Bishops, said the bishops' goals have not changed after the uproar this week in Indiana and, to a lesser degree, Arkansas.

"Individual or family-owned businesses as well as religious institutions should have the freedom to serve others consistent with their faith," Lori said in a statement.

Similarly, the Rev. Russell Moore, who leads the public policy arm of the Southern Baptist Convention, said, "We have to continue to press for religious liberty for everybody regardless of how unpopular that concept might be."

Still, Tim Schultz, president of the 1st Amendment Partnership, which works with religious groups and state lawmakers on religious liberty, said that after this week's contention over religious freedom, "the brand has definitely been tarnished."

The governors of Indiana and Arkansas signed bills Thursday hoping to quiet the national outcry over whether the laws offered a legal defense for discrimination against gays. In Arkansas, the changes more closely aligned the bill with the 1993 federal Religious Freedom Restoration Act. The Indiana law was amended to bar a religious-liberty defense by for-profit businesses accused of discrimination for refusing to serve someone based on sexual orientation, but left in place protections for faith-based nonprofits.

Gay-rights groups hailed the developments as a significant victory. But they said the rapid retreat by Republican politicians should not be allowed to obfuscate what had been at the heart of the measures: the desire to put a firewall around people who want nothing to do with gay weddings.

"All of this was in reaction to same-sex marriage," said Jane Henegar, executive director of the Indiana chapter of the American Civil Liberties Union. "That is the context of this bill, what was told to proponents about why they need this bill. For them to back away and say this wasn't true, I don't know how they can justify that."

In Indiana, amendments signed by Gov. Mike Pence do indeed eliminate any protections for business owners who deny gay customers any service, including those related to marriage. However, the new Arkansas law signed by Republican Gov. Asa Hutchinson leaves an opening for courts to uphold such a right, gay-rights supporters said.

Proponents of the religious-freedom measures do not deny that protecting business owners was one of their primary motivations. But they draw a distinction between turning away individual customers because they are gay and refusing to participate in a gay wedding.

"Cooking a rack of lamb and putting it on a table in front of somebody is not endorsing anything that you may find in violation of your beliefs" and is therefore not something that ought to be protected behavior, said Greg Scott, a spokesman for the Alliance Defending Freedom, a legal nonprofit that advised Indiana lawmakers.

"But if you're a wedding singer and somebody says, 'I want you to lead all the ceremonies for my wedding,' that's really a different story because you are expressing yourself in support and coerced into the celebration of something you don't believe in."

Religious conservatives and some Republican political operatives now describe what occurred in Indiana as a major setback.

"Twenty years from now this Final Four weekend as well as the special religious celebrations for many in our community will likely be a sweet memory," said Curt Smith, of the Indiana Family Institute, who had pressed for the original law and had attended the signing ceremony. "But religious freedom and freedom of conscience will still be a pressing concern if this legislation becomes law."

Religious liberty was once a matter that consistently united groups across the political and theological spectrum. But religious conservatives came to adopt religious freedom as a call to arms as they found themselves more and more on the losing side of the culture wars.

A decade ago, the Becket Fund for Religious Liberty, a public-interest law firm in Washington, convened legal scholars from across the ideological divide on gay marriage to examine potential areas in which religious freedom and gay rights might clash.

First Amendment protections for worship are secure. But complications arise when faith-affiliated organizations, such as charities, hospitals and schools, try to maintain their religious identity even as large employers of people from all faiths and providers of services to the public.

Four years after the Becket meeting, a coalition of evangelical, Roman Catholic and Orthodox Christian leaders, citing the Rev. Martin Luther King Jr.'s "Letter from a Birmingham Jail," unveiled the "Manhattan Declaration: The Call of Christian Conscience." It pledged civil disobedience to government laws they said would compel them to violate their views.

By 2011, the Catholic bishops' conference had formed its own religious-liberty committee and started organizing rallies and prayer services around the subject. The same year, the 1st Amendment Partnership was formed to work with state lawmakers.

"I think it's fair to say the faith groups saw storm clouds on the horizon," Schultz said.

Soon after, a conservative think tank in Washington, the Ethics and Public Policy Center, hired a state policy director, Tim Schultz, and created a program to work the statehouses and advise elected officials interested in sponsoring religious-freedom acts. The bills set a legal framework for people or companies to challenge government rules that they believe hamper religious beliefs or practices.

The movement had its greatest victory to date last year, when the U.S. Supreme Court ruled the Hobby Lobby arts and crafts chain and other closely held businesses with religious objections could opt out of providing the contraceptive coverage required by the Patient Protection and Affordable Care Act.

But that win prompted a liberal backlash, and public opinion against religious exemptions hardened.

But when gay marriage increasingly became recognized by courts instead of legislatures, religious conservatives needed another means to seek conscience protections. Lawmakers in several states turned to the laws known individually as the Religious Freedom Restoration Act, which states had been adopting since 1997, when the U.S. Supreme Court ruled that the federal version of the law did not apply to states.

But many church-state experts say the state laws have been badly misrepresented amid this week's turmoil.

Legal scholars say the laws would not provide blanket protection for religious objectors to gay marriage, as some advocates claimed. Religious Freedom Restoration Acts give people a chance to bring a religious-liberty claim before a judge, who then decides on the merits.

"Those folks who wanted to clutch onto these laws as a way to hold onto the past or stave off gay rights misunderstood what these laws would do," said Robin Fretwell Wilson, a family law specialist at the University of Illinois Law School.

Wilson advised legislators on a compromise enacted last month in Utah that combined religious exemptions with civil-rights protections for gays.

"That's the way forward," she said.

But many religious conservatives and gay-rights advocates rejected that approach, each saying it gave too much away to the other side.

Information for this article was contributed by Rachel Zoll of The Associated Press; by Monica Davey and Laurie Goodstein of The New York Times; and by Sandhya Somashekhar of The Washington Post.