‘A piece of history’ 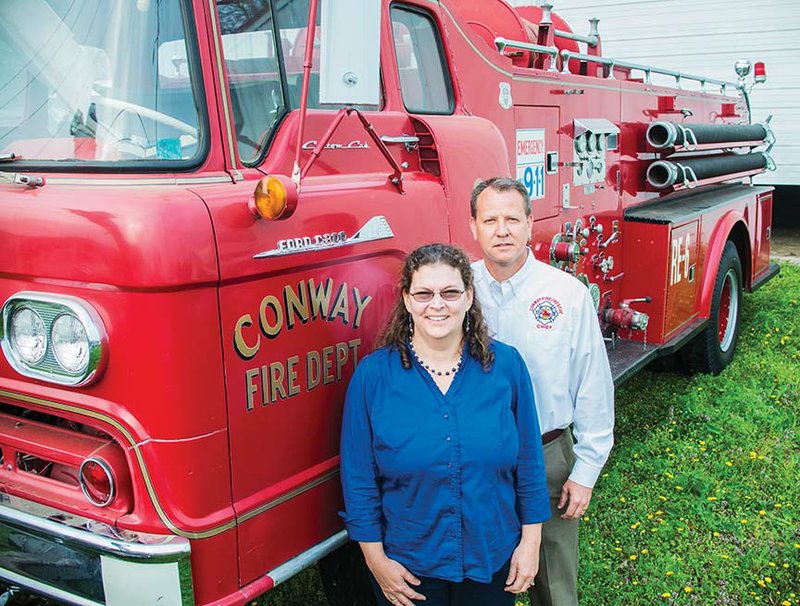 Lynita Langley-Ware, director of the Faulkner County Museum, and Conway Fire Chief Mark Winter stand with the 1960 firetruck that the museum is deeding back to the city. Langley-Ware said the museum took ownership of the truck in 2005, but it has been stored because there was no room to display it. Winter said the truck is important to the history of the city and will soon be stored in a bay at Station 4 on Salem Road.

A 1960 Conway firetruck — used for major blazes such as the Sun Oil Pipeline explosion — has been owned by the Faulkner County Museum and parked in storage for the past 10 years, but the truck will soon have a new home.

The firetruck came close to being donated to a museum in Louisiana, but the truck is being deeded back to the city of Conway and will be parked in a bay at Station 4 on Salem Road.

Lynita Langley-Ware said she got a call in 2005 from then-Fire Chief Bart Castleberry about the truck.

“It was going to be retired, and they didn’t want to just scrap it,” she said. “It was used for a bunch of significant fire events in Conway.”

Being “young and naive,” Langley-Ware said, laughing, she quickly said the museum would take the truck, and her board members agreed.

With no room to display the truck where the museum is located in downtown Conway, then-board member A.J. Hambuchen offered to store the firetruck in a nearby warehouse he owned.

“We just let it sit there, hoping we’d have a big nice building someday where we could display it,” she said. “[The Fire Department] gave us the title. … We just never insured [the truck] where it could be driven out on the road.”

The Conway Fire Department would pull it out, put lights on it and display it at Christmas on the lawn of Central Station in downtown Conway, she said.

“They’d polish it up before they put it back,” Langley-Ware said. “It’s in great shape; it’s a really well-preserved truck.”

Hambuchen, whom Langley-Ware called her mentor, died in February.

“He was a great man,” she said. Langley-Ware said that a few months before he died, when he knew he was in poor health, Hambuchen told her she probably should find another storage location for the historic firetruck.

That was easier said than done, she said.

Langley-Ware said she talked to Conway officials, who told her the city didn’t have anywhere to keep the firetruck on a long-term basis.

So, she started calling museums all over the country.

“I talked to places in Arkansas; I talked to the car museum on Petit Jean [Mountain]. A firetruck is pretty big; it can’t be stored just anywhere,” Langley-Ware said.

After months of making calls, she said a city-owned firefighter’s history museum in Baton Rouge, Louisiana, agreed to take the truck. However, when Langley-Ware reported this to the museum’s board of directors, one member asked if she’d talked to anyone at the Conway Fire Department.

She called Fire Chief Mike Winter, who said he was surprised to hear that the firetruck was in danger of leaving the city.

“We knew Faulkner County had it,” Winter said. “We have brought it back a couple of times during Christmas and decorated it, but it caught me completely off guard when she called and said she found a place in Louisiana that would take it.

“It’s a piece of history — not only for the Fire Department, but for the city. We want to do whatever we can to keep it here.”

Winter, who joined the department in 2001 and observed his one-year anniversary as chief in February, said the truck was “kind of before my time.”

Castleberry said the one-man truck, a Howe, was reliable and fast.

“It was a gas burner — the last gas-burner in the fleet,” Castleberry said. “It had a five-speed manual transmission that you had to be sure and keep your palm open when you shifted, to keep from mashing your knuckles on the metal dash. You had to be in perfect harmony between your hand and your foot. … You had to double-clutch and have your palm open so you wouldn’t grind the gears.”

The former chief said the truck was housed in the Locust Street Fire Station, as it was called at the time, in downtown Conway. It’s where the city’s physical plant is now, he said.

“It was a one-man station, and that’s where I worked for a few years,” Castleberry said.

The truck was used in April 23, 1979, when the Sun Oil Pipeline in Conway exploded. Then-firefighters Dirk Sutterfield and Larry Brewer sustained serious injuries in the blaze.

Castleberry said the truck also has battle scars from that fire.

“The paint on the front was blistered, and the dome on the lights was melted down in a spot from that fire,” Castleberry said. “We still used that truck as a backup on a number of occasions on up into the ’80s, maybe in the ’90s. When it didn’t pass its pump test, we retired it — lot of memories on that truck, lot of fires.”

Langley-Ware said she and Winter have “been back and forth the past few weeks” about the plan to keep the firetruck in Conway. Hambuchen’s son David Hambuchen “has been very sweet about it,” she said. The plan is for the truck to be moved out of storage any day.

“[The Conway Fire Department is] going to take it; we’re going to deed it back to them,” she said. “The museum board voted to agree that if for some reason the city can’t take care of it, we’ll take it back.”

Langley-Ware said she was adamant that the firetruck be placed in covered storage so that it will stay in good condition.

Winter said Station 4 has the only open bay available in the city, and that’s where the truck will be stored.

“Fire service in general is rich in tradition,” he said. “Just because these boys never worked on [the truck] doesn’t mean they’re not going to take pride in it.”

Winter said it will be cared for, and he has a dream for the faithful truck.

“We’d love to, the next station we build, make a foyer big enough to put that thing in,” he said.

“That one has a happy ending because it stays in Conway,” she said.