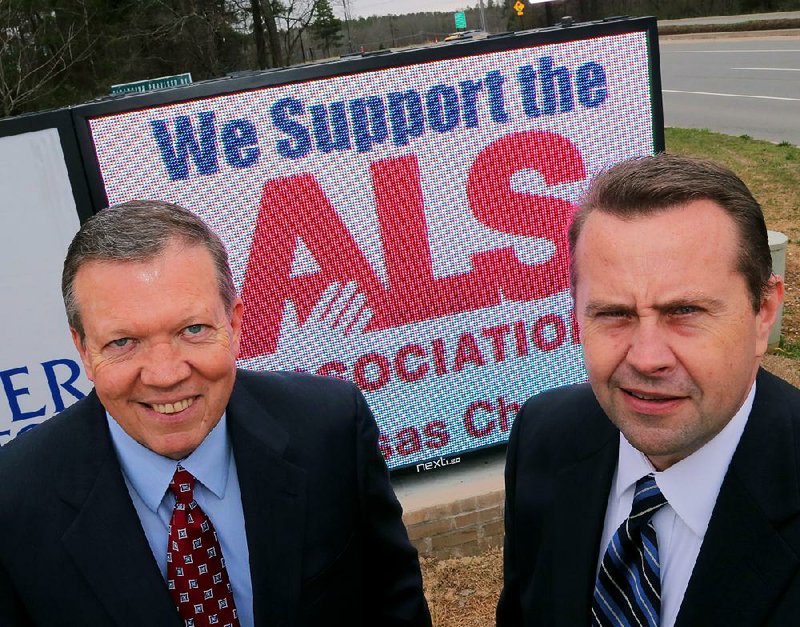 Mike Rainwater and Bob Sexton are co-chairmen of Saturday’s Central Arkansas Walk to Defeat ALS (amyotrophic lateral sclerosis), a major fundraiser for the Arkansas Chapter of the ALS Association.

Mike Rainwater and Bob Sexton are principals in a personal injury law firm whose TV commercial motto is "We'll help you weather the storm." They found they had a storm to weather themselves when partner Stephen Holt was diagnosed with amyotrophic lateral sclerosis -- also known as ALS or Lou Gehrig's disease -- to which he succumbed six months later.

A year and two months after Holt's Jan. 28, 2014, passing, a small tremor can still be heard in the voices of the men as they talk about him.

It's in Holt's memory that the two men are active with the Arkansas Chapter of the ALS Association and are serving as co-chairmen of the Walk to Defeat ALS.

ALS is a progressive neurodegenerative disease, according to association literature. When motor neurons die, the brain's ability to initiate basic movements slowly erodes. Muscles weaken, muscles that enable one to walk, move one's arms, talk, swallow and breathe. According to the association, 15 people a day on average are diagnosed -- 30,000 Americans at any one time are affected. About 120 people in Arkansas are believed to be dealing with ALS in Arkansas.

Rainwater says he wants people to realize that ALS is no respecter of people. "Anybody is ... vulnerable," he says. "And I don't guess you're ever prepared for it; when it comes, you've got to make some hard choices."

And the disease is still shrouded in mystery, Sexton points out. "There's no known cause and there's no known cure for ALS, so it's difficult," he says. "It sometimes can last for years.

"What we kind of like about the Arkansas ALS chapter is ... they're just kind of standing in the gap for those persons diagnosed with ALS to try to help them find medical care, provide equipment to people who may not be able to afford equipment, and provide support not only to the individual with ALS, but also the caregiver," Sexton continues.

Up close and personal

The men became acquainted with the ALS Association when determining what their partner Holt's needs would be. Sexton says they didn't know that much about the disease before. "And then it seems like every other person we talked to wanted to come talk to us about their friend or their relative who had ALS.

"We wanted to be real intentional about ... what we could do to help them," Sexton says. "Also, we have a lot of employees that loved Stephen and knew Stephen. And we wanted to make sure we did everything to honor him in their sight as well."

People with ALS live an average of two to five years after diagnosis, with many living "longer, more productive lives," thanks to advances in research and improved medical care, according to association data. Holt was diagnosed in July 2013; he died at 46. "From week to week to week, we could see the progression," Rainwater says. "That's how fast it was moving."

Within five weeks of Holt's passing, the ALS Association's Arkansas Chapter had a kickoff for the next year's events. The law firm took the group up on its invitation to be a corporate sponsor. Colleagues there wanted to do something, too. Someone got wind of the walk, so they put together a team. "We didn't have to ask them," Rainwater says.

Even while suffering with ALS, Holt wanted to do something, too. He didn't spend his last days feeling sorry for himself. "He had so many people around him" -- college fraternity brothers, sports buddies, church mission trip companions, Rainwater says. "One of the things he told me was that he really needed to keep his mind occupied, and so he intentionally surrounded himself with people coming to see him. He had Bible study in his home almost every night."

"We're really trying to ... do everything we can to be good stewards with this responsibility."

That means helping an association that provides such benefits as respite care grants, family and children support, resources and education, and equipment loans for those with the same disease their partner had. Rainwater points out that ALS can be a tremendous financial burden on the patient and his family. It takes an estimated $250,000 a year to support a person who has ALS. "The reality is, that is not $250,000 in cash; that's $250,000 in services provided by everybody coming together and helping. What the ALS Chapter does is, they know who all the vendors are. ... They know, [that] as you go through this ... you need different types of equipment at different times.

"They're like a clearinghouse of all the information. So it's quite easy to plug into them."

The men and the organization hope to raise $125,000 in what will be the sixth annual walk. Eighty-eight percent of the money raised from the walk will stay in Arkansas. Association goals in central Arkansas, in particular, include forming a foundation advisory board in Little Rock and a warehouse, rather than a storage facility, to hold the equipment to be loaned.

"We didn't really choose ALS -- probably would not have chosen ALS," Rainwater says. "But this encounter through our beloved partner and friend Stephen Holt is really [why] ALS has chosen us, I guess."