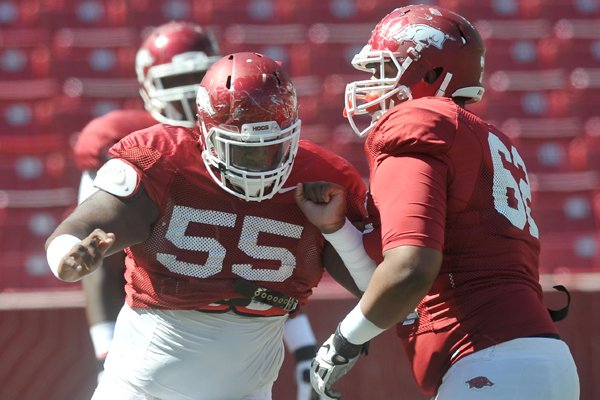 "There was no question," Kirkland said. "I wanted to do it."

Left tackle is considered the key position on an offensive line because it's the spot that protects the blind side of a right-handed quarterback.

"It's major pressure on you, but you've just got to have your head on right and get after it," Kirkland said.

Pittman said Kirkland, a junior who has 21 consecutive starts at right guard, moved to left tackle because he's the team's best pass blocker with his long arms and quick footwork.

The big challenge for Kirkland switching positions, Pittman said, is getting used to being on the outside blocking defensive ends rather than packed inside between a center and tackle.

"As soon as Denver gets comfortable with that --because he can do it -- then I think you're going to have something special at left tackle," Pittman said.

Kirkland, 6-5 and 343 pounds, played tackle at Booker T. Washington High School in Miami and said he's making a quick adjustment back to his old spot.

"Coach Pittman is the best offensive line coach in the country," Kirkland said. "I've just got to keep listening to him and moving forward."

Arkansas quarterback Brandon Allen, who is right-handed, said he's glad to have Kirkland at left tackle.

"I have a lot of confidence in Denver," Allen said. "He's a tremendous athlete. He does so many things well and he's so hard to get by, which is what you want at that left tackle spot. He's very mobile for how big he is."

"In the game of college football, it's all about getting your best five linemen on the field," Skipper said. "If this is the best way for us to do that, then we're right where we need to be."

Skipper, who as a freshman started at left guard after playing tackle at Arvada (Colo.) Ralston Valley High School, said right tackle has been an easier transition than he expected.

"I'd never played on the right side," said Skipper, 6-10, 307. "I've finally got the body control where I don't have to think through it and can just do it and get good reps at what I want to do."

Pittman said he believes right tackle will be Skipper's position in the NFL.

"He's a better right tackle than he is a left tackle," Pittman said. "He's just more natural over there. He really has done a nice job."

Ragnow, who played tackle at Chanhassen (Minn.) High School, is getting some work at center behind Smothers, but said he's glad to be at guard.

"Guard is less stressful than center," Ragnow said. "It's still a difficult position, but it's been a lot of fun pulling and getting out in space."

"I didn't see a lot of breakdowns," Bielema said. "We haven't had many issues at all with the one unit."

Senior tailback Jonathan Williams said the linemen are starting to work better together, but have room for improvement and the time to do it.

"Just because you have the talent, it doesn't mean they have it down yet," Williams said. "So they're starting to jell with each other and they're still working on that.

"When you watch film, you can definitely see how good they can be."

Kirkland and Skipper, who came to Arkansas as tackles but started at guard as true freshmen because they were the Razorbacks' best options at the time, are back at the positions where they should play their best.

"I think we're the best line in the country. We've just got to keep working at it."