2 killed in fire at NLR home; cause probed 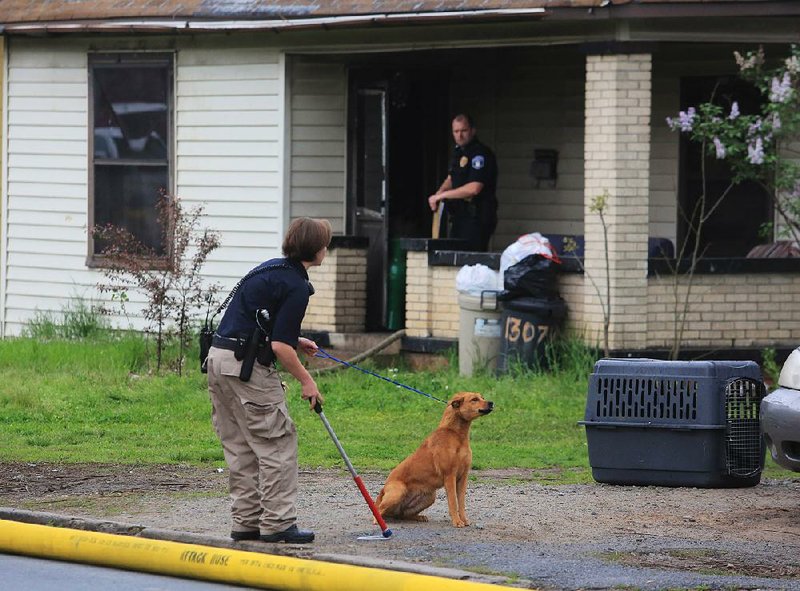 Jessica Beins, with North Little Rock Animal Control, tries to coax a dog to go with her Tuesday morning at the scene of a fatal fire at 1307 W. 16th St. in North Little Rock. The dog was found in a pet carrier inside the house. A woman and man were found dead in the attic.

Emergency personnel responded at 5:32 a.m. to a one-story home at 1307 W. 16th St. Chief Fire Marshal John Pflasterer said firefighters knocked down the blaze about 20 minutes later and found the bodies of a man and woman in the attic.

Investigators believe the fire started in a rear bedroom of the wood-frame structure. It burned up about half of the 1,216-square-foot home and caused smoke and heat damage to the rest, according to Pflasterer. Windows broke and were blackened with ash, and vinyl siding melted into rolls.

The cause of the blaze hadn't been determined late Tuesday. Pflasterer said there were no signs of foul play.

Authorities had not released the victims' identities Tuesday night.

Pulaski County property records show the house, built in 1940, is owned by Thomas Autrey of Jacksonville. A neighbor, Danny Zakrzewski, said Autrey's daughter, who was in her 40s, and her boyfriend had lived in the house and were home during the blaze.

Zakrzewski said Autrey and his wife came to the residence after the fire and were "pretty broken up, for good reason."

A phone directory listed a nonworking number for Autrey.

He said he and his wife woke up moments after emergency personnel had arrived and saw flames "barreling out the side" of Autrey's house.

"The flames, they were coming up out the window and over the roof of the house. I think the worst part of it was on the back end of the house, which we couldn't see. It was really dark, and you could see the flames coming up. We knew it was bad," he said.

Zakrzewski said Autrey's daughter had lived at the home about 10 years and had been a kind neighbor.

"I knew she was there [Tuesday morning], but I was hoping she wasn't," he said.

Sharon Mayo, who lives next door to the Autrey residence, said her 14-year-old son woke her up and alerted her to the blaze Tuesday morning. She said she called 911, woke other family members and went outside.

At least five fire trucks pulled up minutes later, and emergency personnel cordoned off the block, she said.

Mayo's home, just a few feet away from the blaze, was not damaged.

Print Headline: 2 killed in fire at NLR home; cause probed