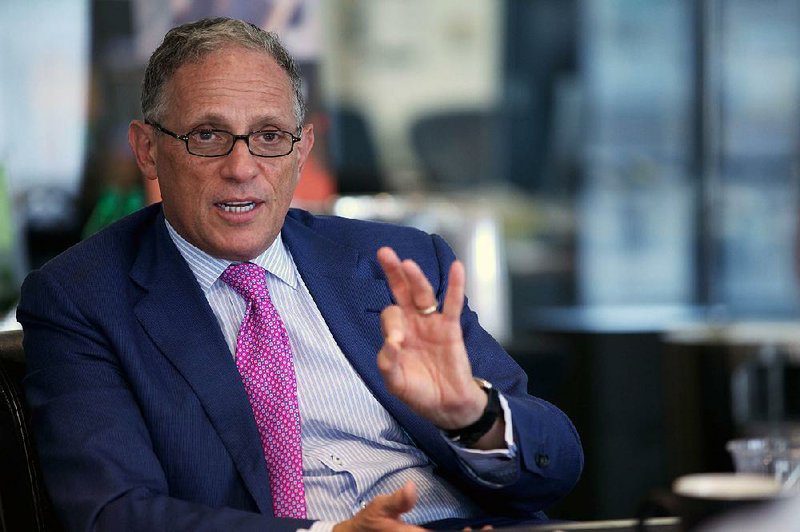 Fred Hochberg, president of the Export-Import Bank, speaks during a Bloomberg Government lunch in Washington, D.C., U.S., on Wednesday, Sept. 10, 2014.

That's where the U.S. Export-Import Bank comes in, according to its chairman and president, Fred P. Hochberg.

During a visit to Power Technology on Tuesday, Hochberg said his bank works mostly with small businesses that export products. Most customers, even those overseas, typically don't like to pay in advance, he said. Instead, buyers want to place an order, get the goods and then remit payment to the manufacturer.

"We work with them and companies like Power Technology to provide credit insurance," said Hochberg, who toured the company's plant in advance of a speech Tuesday night at the Clinton School for Public Service in Little Rock. "Just like [William Burgess, vice president of Power Technology] has fire insurance and theft insurance, he needs insurance if sales overseas don't pay on time. Ninety percent of our customers are small businesses."

Congress is debating whether to reauthorize the Export-Import Bank, which will cease to exist June 30 unless Congress acts.

The bank is used by large and small U.S. businesses to guarantee financial deals through mechanisms such as working capital guarantees and export credit insurance for overseas customers.

The House Financial Services Committee, which has jurisdiction over the Export-Import Bank, is still examining the reauthorization.

Arkansas' 2nd District Congressman French Hill, a Republican, sits on the committee. Hill has yet to decide whether he supports reauthorization.

U.S. Sen. John Boozman also hasn't made up his mind about reauthorization. A spokesman said that while the senator has been supportive of reauthorization in the past, he is waiting to see the final bill.

The Export-Import Bank said that in fiscal 2014, it approved $20.5 billion in loan authorizations, which supported $27.5 billion in export sales. It said that the loans supported businesses that employed 164,000 people in the U.S.

Bank spokesman Matt Bevens said in an email that since 2007, the amount of exports supported by the bank has doubled. Since 2007, the bank has supported exports worth about $770 million by more than 40 Arkansas-based exporters. The U.S. Census Bureau said top exports including aircraft, engines and parts, as well as chicken and rice.

At Power Technology on Tuesday, Burgess said U.S. businesses need the bank to compete with businesses in countries that receive similar export supports.

Burgess said that when he approached a commercial insurer for guarantees similar to those offered by the Export-Import Bank, he was turned down. "They didn't want my business due to its size," he said.

Power Technology, which employs about 50 people, exported equipment to 42 different countries last year, including Israel and the European Union. Walter Burgess, the company's vice president for sales, said exports now make up about 20 percent of the company's sales.

Its laser products are used for tasks such as measuring blood gases in medical tests or examining semiconductors during manufacturing. It also provides some products to the U.S. Department of Defense for various weapons systems.

"High-tech products are in demand around the globe," said William Burgess.

Last month, the company unveiled a new movie projector using laser technology called the Illumina Cinema Laser System that it hopes to market to theaters worldwide, especially in China, as an alternative to the Xenon bulb now being used in digital projection systems.

Burgess said given the "six-figure" cost of the new projector, "being able to offer financing to a foreign buyer is a big deal."

"In many countries, small businesses often find it impossible to borrow money," he said. Burgess said as many as 18 workers could be added over the next three years if sales grow as expected. While a Xenon bulb, which lasts about 1,000 hours and costs up to $3,500 to replace, the laser system would last from five to 10 years.

Hochberg said companies such as Power Technology, which are bringing high-value products to the marketplace, need the Export-Import bank's support.

"In talking to William about his new product that's coming out in late fall, that's an important thing when you're going to be sending overseas several hundred thousand dollars worth of goods," Hochberg said.