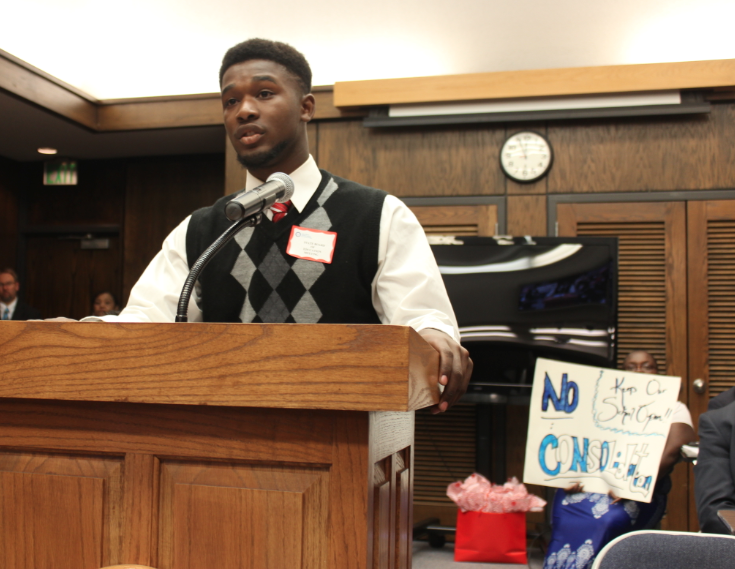 Adrick Smith, 17, asks the state Board of Education not to consolidate the Hughes School District during a meeting Thursday.

The Arkansas Board of Education voted to consolidate the Hughes School District into the West Memphis School District on Thursday despite calls from Hughes officials, supporters and students who said the St. Francis County community would be better served by keeping its local school.

The consolidation, approved in a 7-1 vote, goes into effect by July 1.

Arkansas law required the board to consolidate the school because its student population fell below a 350-student threshold for two years in a row at its kindergarten-through-12th-grade facility.

But Hughes officials said a law passed with an emergency clause in the recently ended legislative session — House Bill 1263 — allowed schools with fewer than 350 students to seek a waiver allowing them to remain open if they are not under fiscal or academic distress.

An attorney for the Education Department noted that Hughes is under fiscal distress and thus the waiver isn't applicable.

An attorney for Hughes, James Valley, questioned the definition of fiscal distress in the law and suggested the fact that the law was passed with an emergency clause — which means it immediately went into effect after Gov. Asa Hutchinson signed it — shows it was meant for the Hughes district to use. No other districts are facing consolidation, he said.

Rep. Charlotte V. Douglas, R-Alma, told the board she added the emergency clause to HB1263, which she cosponsored, though there was also a separate, unsuccessful attempt to pass a bill to redefine fiscal distress, also aimed at the Hughes situation.

The board first voted 5-3 not to grant the waiver allowing the district to continue without any consolidation. Chairman Sam Ledbetter said before that vote that the law doesn't allow the waiver "whether we agree with it or disagree with it."

Valley said afterward that it's possible the Hughes district would seek an appeal of the board's decision, which he called disappointing.

"Legally, they're wrong on the waiver," he said.

Hughes Superintendent Sheryl Owens earlier in the discussion asked the board to delay a decision for a year, saying the district has made "significant progress" on academics and finances despite its small student body.

"During this time, we believe we will be able to prove to ourselves and to the state of Arkansas that small districts can be effective," she said. "And we believe we can be further effective if we can be given one more year to prove ourselves."

Other supporters of the Hughes district argued consolidation would be a heavy blow to the city, which has a population of about 1,400. Two Hughes juniors also spoke out against any sort of merger, saying they like Hughes' smaller class sizes and believe transportation issues would arise if consolidated.

"My dream has always been to finish high school as a Blue Devil," said 17-year-old Adrick Smith. "Please keep our school open and help me make my dreams come true."

An attempt by Hughes to voluntarily consolidate with Forrest City fell through at a board meeting last month when Forrest City pulled out; the Forrest City superintendent told the board Thursday that concerns it previously had had been addressed and it was "absolutely open" to take in Hughes.

Board member Diane Zook motioned for the West Memphis consolidation, noting the district allows school choice while Forrest City currently does not.