Law inked for rules from Bible 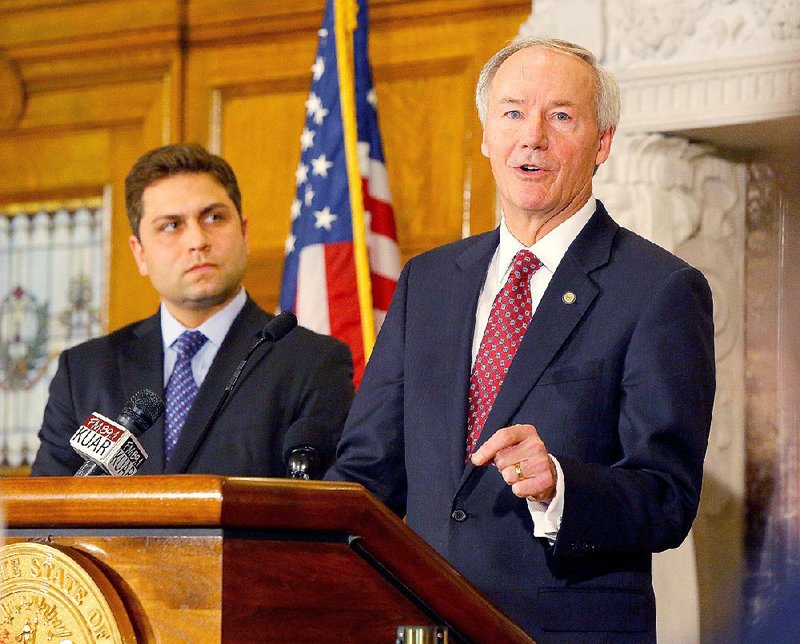 President Pro Tempore Jonathan Dismang, left, listens as Gov. Asa Hutchinson (right) calls for changes to House Bill 1228 at a news conference at the state Capitol in Little Rock in this file photo. 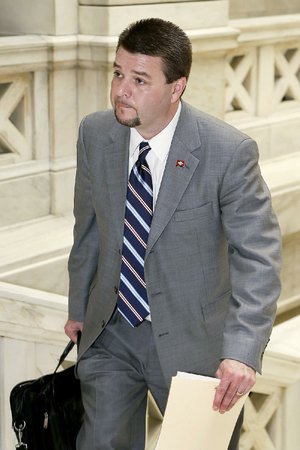 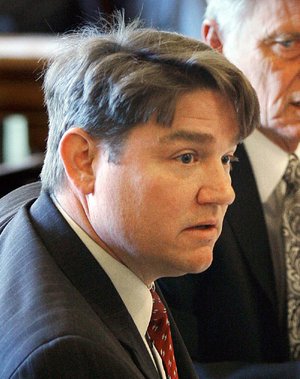 Photo by DANNY JOHNSTON / AP
In this April 6, 2011, file photo Arkansas Secretary of State Mark Martin, left, speaks at a meeting of the Arkansas Board of Apportionment at the Arkansas state Capitol in Little Rock, Ark. Martin on Friday, June 17, 2011. 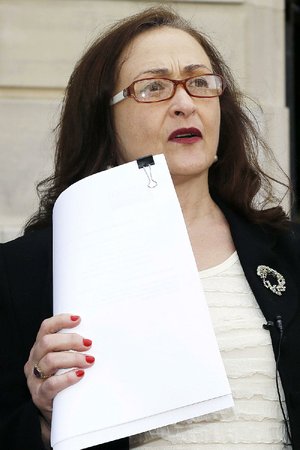 Photo by DANNY JOHNSTON / AP
Rita Sklar, executive director if the ACLU of Arkansas, speaks at a news conference in front of the Pulaski County Court House in Little Rock, Ark., Wednesday, April 16, 2014.

Senate Bill 939 was introduced by Sen. Jason Rapert, R-Bigelow, on March 9 and zipped through the Republican-dominated Legislature in about three weeks. The Senate voted 27-3 to approve it on March 25 and the House voted 72-7 to send it to the governor on April 1.

The measure requires the secretary of state to permit and arrange for the monument to be designed, constructed and paid for by private entities at no expense to the state. Similar monuments have been constructed in Oklahoma and Texas.

Rapert said he appreciates Hutchinson, a Republican, for signing his bill into law.

He said he expects a private entity to be formed soon to raise money to construct and maintain the monument, but he’s not sure how much it will cost.

A spokesman for Secretary of State Mark Martin, Laura Labay, said “we have no estimate or guesstimate at this point.”

Rapert said he’ll also work with Martin, a Republican, who is required to approve the design and site selection for the monument.

If the constitutionality of the monument is challenged in court, the attorney general may prepare or present a legal defense of the monument or request the Liberty Institute to prepare and present a legal defense, according to the measure. Rapert said the Liberty Institute has agreed to defend the state for free if asked to do so.

The Liberty Institute is the “largest legal organization in America dedicated solely to defending and preserving religious liberty in America,” according to its website.

“The placement of the monument … shall not be construed to mean that the state of Arkansas favors any particular religion or denomination over others,” the measure states.

But Rita Sklar, executive director of the American Civil Liberties Union of Arkansas, said the civil-liberties group is going to look at filing a legal challenge to the monument because “we think it’s a religious document and to say otherwise is disingenuous.

“It’s divisive and excludes both people of non-Abrahamic faiths and no faith from feeling” that they are welcome in Arkansas, she said.

Rapert countered that the ACLU “has no moral authority” to speak about the Ten Commandments from a religious perspective.

In addition, he said the group is “highly antagonistic about anything [it opposes],” noting the group has already filed a challenge to the state’s new lethal-injection law.

In 2005, the U.S. Supreme Court upheld, in a 5-4 ruling, the constitutionality of the Texas Ten Commandments display. Similar displays in Kentucky, far newer than the Texas monument, were struck down.

A lawsuit challenging a similar monument at the Oklahoma Capitol is pending before the Oklahoma Supreme Court, after a county judge said the monument could stay. That lawsuit was filed by the American Civil Liberties Union of Oklahoma.