Hillary Clinton to run for president in 2016 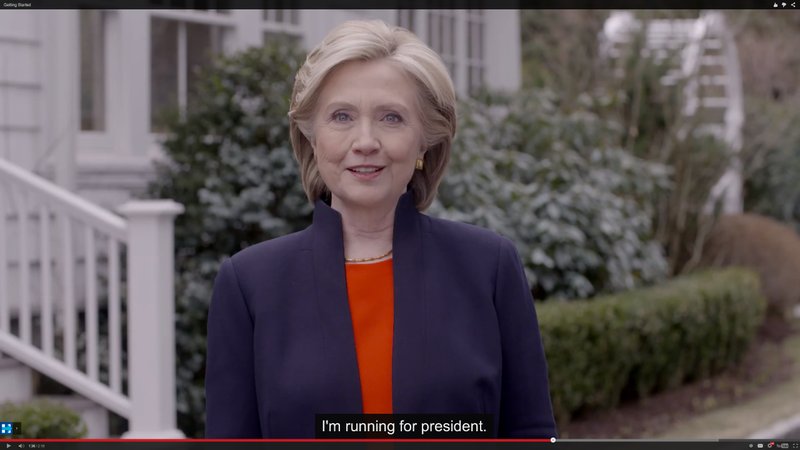 In this image taken from video posted to hillaryclinton.com on Sunday, April 12, 2015, Hillary Rodham Clinton announces her campaign for president. The former secretary of state, senator and first lady enters the race in a strong position to succeed her rival from the 2008 campaign, President Barack Obama.

WASHINGTON — Hillary Rodham Clinton jumped back into presidential politics on Sunday, announcing her much-awaited second campaign for the White House. "Everyday Americans need a champion. I want to be that champion," she said.

As she did in 2007, Clinton began her campaign for the 2016 Democratic nomination with a video. But rather than follow it with a splashy rally, she instead plans to head to the early-voting states of Iowa and New Hampshire, looking to connect with voters directly at coffee shops, day care centers and some private homes.

"So I'm hitting the road to earn your vote. Because it's your time. And I hope you'll join me on this journey," Clinton said at the end of a video, which features a series of men, women and children describing their aspirations.

This voter-centric approach was picked with a purpose, to show that Clinton is not taking the nomination for granted. Only after about a month of such events will Clinton will give a broader speech outlining more specifics about her rationale for running.

The former secretary of state, senator and first lady enters the race in a strong position to succeed her rival from the 2008 campaign, President Barack Obama.

Her message will focus on strengthening economic security for the middle class and expanding opportunities for working families. The campaign is portraying her as a "tenacious fighter" who can get results and work with Congress, business and world leaders.

Clinton's strategy, described ahead of the announcement by two senior advisers who requested anonymity to discuss her plans, has parallels to the approach Obama took in 2012. He framed his re-election as a choice between Democrats focused on the middle class and Republicans who sought to protect the wealthy and return to policies that led the country into recession.

Clinton will face pressure from the progressive wing of her party to adopt a more populist economic message focused on income inequality. Some liberals remain skeptical of Clinton's close ties to Wall Street donors and the centrist economic policies of her husband's administration. They have urged her to back tougher financial regulations and tax increases on the wealthy.

"It would do her well electorally to be firmly on the side of average working people who are working harder than ever and still not getting ahead," said economist Robert Reich, a former labor secretary during the Clinton administration who has known Hillary Clinton for nearly five decades.