Earnings soar 58% at Bank of Ozarks 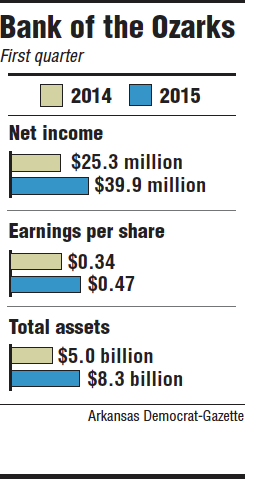 The bank earned $39.9 million in the quarter, up from $25.3 million in the first quarter last year. Earnings per share were 47 cents, beating the estimate of 42 cents a share projected by nine analysts surveyed by Thomson Reuters.

Bank of the Ozarks closed Monday at $37.63, down 3 cents. The earnings were released after the market closed.

The first quarter historically is the slowest quarter for loan growth for Bank of the Ozarks, said Matt Olney, a banking analyst with Stephens Inc.

But a portion of Bank of the Ozarks' loans and leases rose $331 million in the quarter.

"This was very good growth considering the seasonal headwinds we typically experience in the first quarter," George Gleason, the bank's chairman and chief executive officer, said in a statement.

In February, the bank closed on its purchase of Intervest Bank of New York, which had $1.6 billion in assets. Bank of the Ozarks expects to convert Intervest's computer systems in June, Gleason said.

Bank of the Ozarks also has ended the loss-share agreements it had with the federal government on the purchase of seven failed banks acquired in 2010 to 2011.

"We are in a great position to move forward to new opportunities," Gleason said.

Those opportunities are likely to include more metropolitan area offices for the bank, as well as acquisitions, Olney said.

Bank of the Ozarks has offices specializing in real estate lending in several cities, including Dallas, Houston and Austin in Texas; Atlanta; Asheville, N.C.; New York City; and Los Angeles.

It also is considering opening lending offices in Seattle; Washington, D.C.; Boston and Chicago. Olney doesn't expect the bank to stop there.

"I would expect to hear about some additional openings over the next few quarters," Olney said.

Bank of the Ozarks has acquired 12 banks since 2010, including the seven failed banks.

"I'd be surprised if [Bank of the Ozarks] doesn't announce an acquisition this year," Olney said.