Huckabee giving up his radio broadcast 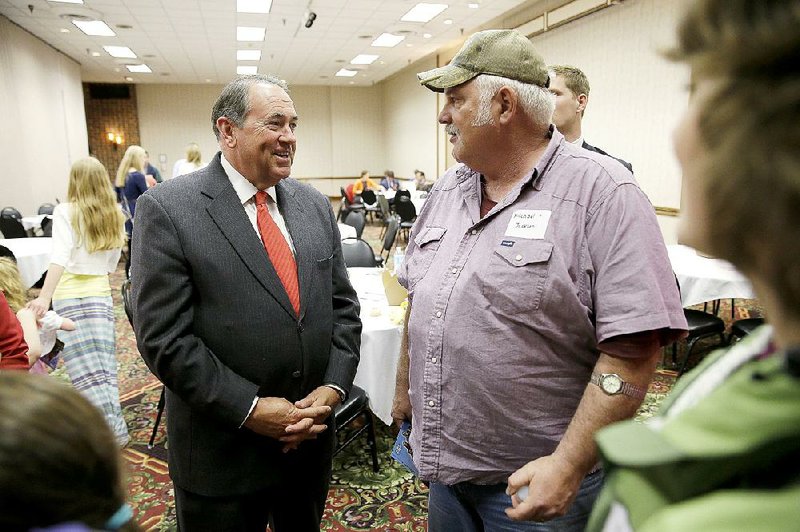 Former Arkansas Gov. Mike Huckabee (left) attends an event in Des Moines, Iowa, earlier this month. Huckabee, who is considering a run for the GOP presidential nomination, announced Wednesday that he would end his syndicated radio commentary May 1.

WASHINGTON -- Former Arkansas Gov. Mike Huckabee, who is weighing a 2016 bid for president, announced Wednesday that his nationally syndicated radio commentary will no longer be broadcast starting May 1.

It's the latest broadcast media platform he's relinquished as he weighs another White House run. He has promised to make his decision this spring.

Huckabee is one of at least a dozen Republicans who have said they are interested in running. U.S. Sens. Ted Cruz of Texas, Rand Paul of Kentucky and Marco Rubio of Florida have formally announced bids in recent weeks. Former Secretary of State Hillary Rodham Clinton became the first prominent Democrat to announce a bid Sunday, though several others have expressed interest.

Huckabee hinted at his future plans in Wednesday morning's radio segment. Among other places, it aired during First News with Kevin Miller on 102.9 KARN-FM in Little Rock. Huckabee has done the up to four-minute-long commentary segments three times a day for 6½ years, taking over after the death of longtime radio personality Paul Harvey in 2009.

"I've had biting and tough commentary about some of the more absurd ways in which Washington defied common sense and busted our family budgets as well as in which their naive and so called smart diplomacy caused us to lose our friends' trust and gain nothing but the ridicule of our enemies," he said. "But, as I move closer to the decision to do more than talk about these concerns and do something about them, I will bring the broadcast version to a close."

In an email to more than 500 stations that carry the segments, WYM Media Management Managing Partner Debbie Greenbaum confirmed the end date.

"The governor is deeply grateful for your support and partnership in airing The Mike Huckabee Report all these years. But, as you are aware, he is in the midst of making some major go-forward decisions," she wrote.

Huckabee has a long history with radio. His first job was reading the news and weather for a TOWN radio station when he was 14. In 2012 and 2013, Huckabee hosted a three-hour radio show that was broadcast on more than 200 stations. He even had a radio studio built to Cumulus Media specifications in his Florida Panhandle home.

Since announcing he would leave Fox News Jan. 3, Huckabee has published his 12th book, titled God, Guns, Grits, and Gravy and made more than 30 stops at bookstores and churches on a tour that focused largely on the Bible Belt. He also hosted a live telecast from a Little Rock church Feb. 8 and led a tour group in Israel.

Huckabee's spokesman, Alice Stewart, who also has history with radio as host of The Alice Stewart Show in Little Rock, said the commentary announcement has been on the horizon for some time as Huckabee decides whether to run.

"Part of it was winding down some of his business ventures and the radio part of that," she said.

"He made a conscious decision months ago that it would put him in a better position to focus on what he needs to be doing. ... Stepping away from the Fox show was part of it, winding down his schedule in terms of all of his other commitments is also a big factor."

While the commentary will no longer be broadcast, Huckabee is starting a subscription-based website, called Huckabee Exclusive, that will provide daily audio updates, weekly video updates and an issues brief each week to people willing to pay $7.95 a month, or $59.40 per year.

"Everywhere I go, people tell me they hope I run, but they miss the television show and would miss my being on radio if my candidacy caused it to cease as well. That's why I have launched the Huckabee Exclusive," he said in a newsletter to supporters Wednesday. "This is an exciting new venture for me that I will be able to continue whether I run for office or not. The material on the Huckabee Exclusive won't be available to just anyone--only those who want a seat at the table."