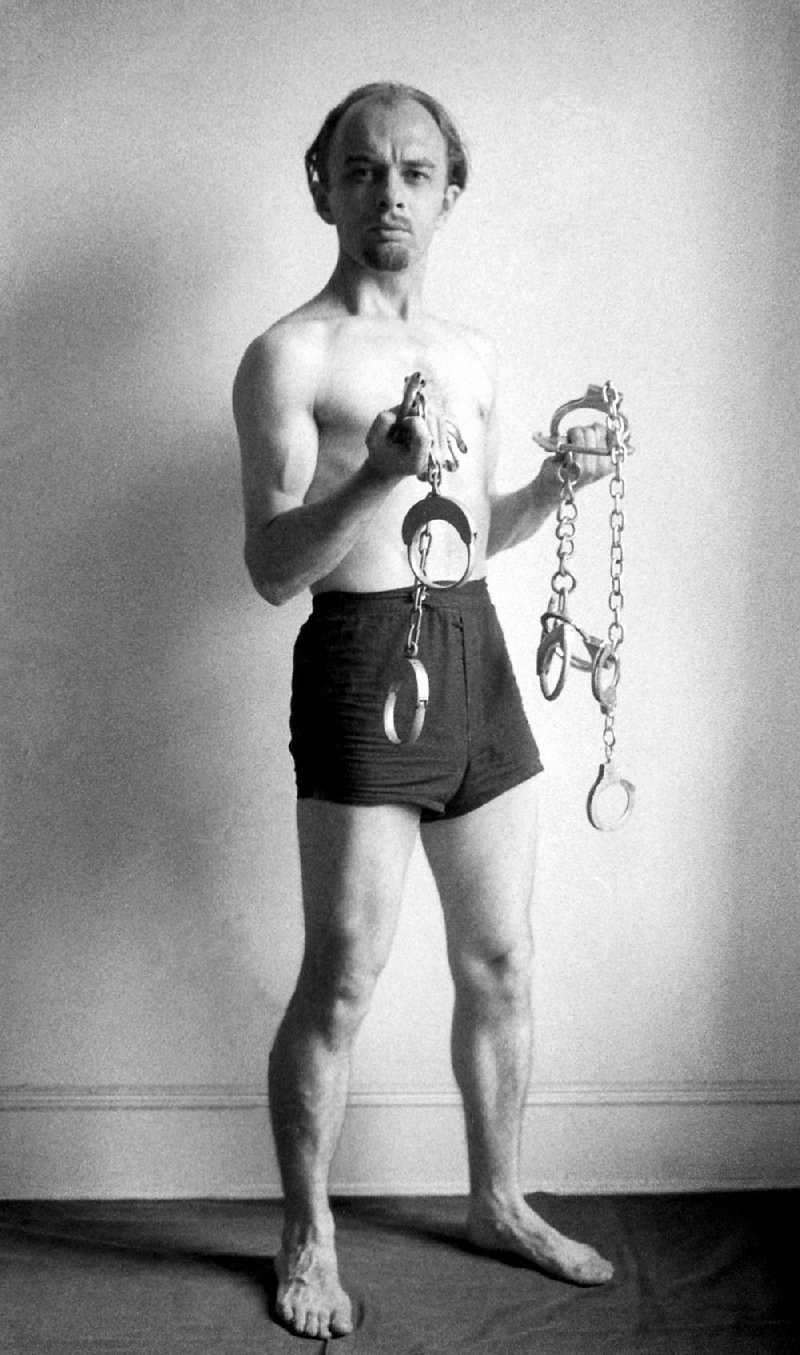 A young James Randi, escape artist, is seen in the documentary An Honest Liar.

"I have a specific expertise. It's a strange expertise, how to fool people, but I know how it's done, and I know how to avoid the effects of it," says former illusionist and now full-time debunker James "The Amazing" Randi. "I've been around, and for 86 years, I've been doing this kind of thing. I think I started at birth. I didn't waste any time in between."

In An Honest Liar, the new documentary from directors Tyler Measom and Justin Weinstein, the man who achieved fame as an escape artist not only exposes phony psychics and faithless healers but also discusses his personal life with an astonishing frankness. The investigator (born in Toronto as Randall James Hamilton Zwinge) says viewers shouldn't be surprised by how intimate the film gets.

"Magicians are among the most honest people in the world. They say, 'I'm going to deceive you.' And then they do it, and then they say, 'I deceived you.' That's as honest as you can get."

Throughout An Honest Liar, Randi reveals how he has successfully busted spoon bending psychic Uri Gellar and faith healer Peter Popoff, who knew what ailed visitors to his church only because his wife was reading their ailments to him over a radio earpiece. His other targets have included homeopathic medicine and the anti-vaccination movement.

To demonstrate the lack of potency in homeopathic meds, Randi swallowed a bottle of sleeping pills and proceeded with his TED talk as if nothing had happened.

"I'm still not sleeping. I'm still having a hard time sleeping," he admits.

"Vaccinations have saved millions of lives in countries all across the globe for ages now. We're in danger of returning to those days when things like measles and such were epidemic and took away tens of thousands of young children. Frankly, we're in a state where that could return if the anti-vaxers have their say."

Randi finds that the charlatans he has debunked have often received a pass from an uncritical press. An Honest Liar begins by recounting an intentional hoax that Randi and a self-proclaimed psychic named Carlos pulled on an all-too-receptive Australian media. Randi backed up their claims with phony American news clippings that a cursory reading could have refuted.

"That comes from the media themselves because the media tend to promote these things," he says. "If somebody says a meteor is going to strike the Empire State Building or the World Trade Center, that makes news. Editors can't resist it, even if they don't believe it's going to happen. If somebody makes a prediction about it, whether it's a geologist or a psychic, they have to print it because it's news and it gets people's attention. All the media are in competition with one another, so they want to be up front and ahead. There's a certain irresponsibility on the part of the media, as a matter of fact.

"I think the media need a little more responsibility in some respects. It needs to look and say, 'How will this influence people who are grieving or have been harmed in some way or attacked? How will it affect them? Will it change their mind? Will they then start to seek help where there is none?' The 'psychic profession' out there, and I use that expression in quotation marks, of course, is willing to grab on to these people and to drain them of their money and their security very easily for sensational purposes and for the money it brings them."

Randi had a strong ally in the late Tonight Show host Johnny Carson, who frequently consulted with Randi to demonstrate how the powers psychics claimed to have disappeared when they didn't control the presentation.

"Johnny Carson would call me from time to time after his retirement, every two weeks or so, just to chat, and he would always drop into the conversation, 'Hey, I just saw Peter Popoff. I thought we wiped him out.' I'd tell him, 'John, these are unsinkable rubber ducks. They never go away. As long as they're breathing, they're lying.' And John would say, 'But I thought I did such a good job.' It doesn't last, apparently. The public is determined to be fooled," he says.

Because of our inherent desire to be amazed, Randi says, he still receives requests for how to make the truth easier to understand. Scientists, for example, know baloney when they see it but lack Gellar's ease in front of the camera (he's in the documentary).

"That's what you call showbiz, too," Randi says. "You have to have a gift of the gab. I've known so many scientists who've said to me, 'How can I say that better?' because they don't have that particular knowledge or background."

If Gellar and Popoff aren't going away, neither is Randi. He allowed the filmmakers to continue during a uniquely painful episode. During the filming, Immigration and Customs Enforcement arrested the Venezuela-born Carlos, who had overstayed his visa and changed his name to avoid persecution in his home country for being gay. The movie follows Randi as he nervously awaits the outcome of Carlos' situation. He was eventually released on probation.

When asked if having such an unpleasant moment onscreen was difficult for him, Randi corrects me by saying, "Perhaps; I don't know how unpleasant they were. 'Awkward' would be a better term."

Despite a limited run, An Honest Liar has played in dozens of theaters across the United States, introducing new audiences to his efforts and potentially inspiring new debunkers. "And the public reaction has been so satisfactory to An Honest Liar, that film tells everything. It tells the whole story. It's been very heartwarming. I've had so many people taking me by the hand and saying, 'you've made a big change in my life.' You can't buy that," he says.