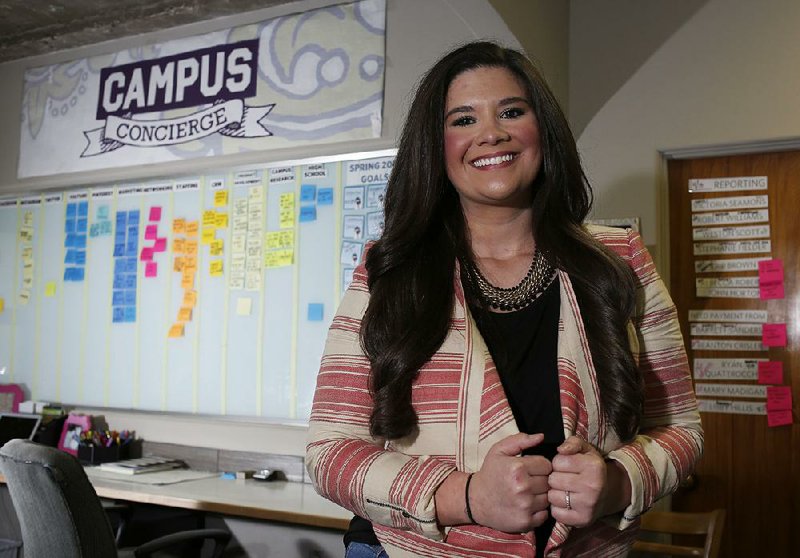 FAYETTEVILLE -- From an office full of sticky notes and color-coded calendars, Anna Morrison says her organizational ability got her through college.

It's clear the 25-year-old chief executive of Campus Concierge relishes showing college students the wisdom of having a place for everything, and everything in its place. But clients and employees of her tutoring business say a personal touch -- more than planning skills -- makes her business successful.

They say that's why she was named young entrepreneur of the year in Arkansas by the U.S. Small Business Administration.

"She's a great person. She really cares about my son," said David Hernandez, a senior vice president at Hunt Consolidated, a Texas company. "For me to know that someone is there who truly cares about my son is the most important thing. I feel like there's somebody looking out for him."

When Morrison graduated from the Sam M. Walton College of Business at the University of Arkansas in 2011, she figured she would soon be employed by a Fortune 500 company. She had worked at the World Trade Center in Rogers for three years, networking with top executives, and she graduated with a degree in business administration.

But life intervened. Her fiance, Mitch Petrus, was drafted by the New York Giants in the 2010 NFL Draft, So she moved to New York, volunteered with the team, made public appearances and grew Petrus' social media brand.

"When you graduate from Walton, you have this mindset that you're going to get a job right out of college. They really hype you up," she said. "So I sent my resume out absolutely everywhere in the area, and I was determined not to use the fact that my boyfriend was playing for the NFL team. He was not going to be my shoo in. I didn't get one call back."

The pair were there for three years. Her fiance went to the Super Bowl in 2012, and the Giants won. She said she wouldn't trade the experience for the world, but it also was stressful and expensive.

"It made me really appreciate Fayetteville and what a small town has to offer," she said.

Her parents opened Campus Concierge in 2012 and named Morrison business consultant for operation procedures. In April 2013, she was named chief executive.

At that time, she faced a major problem: The business practically had no clients.

Campus Concierge's original concept was to be a "mom away from home" with grocery delivery, laundry, transportation, tutoring and other services.

"That would be awesome, but that's not what the student needed," Morrison said.

So she focused on tutoring, initially offering review sessions at the end of the semester for free. In fall 2013, the company employed 10 tutors and helped about 45 students.

"This is all word-of-mouth," she said. "People like to hear a story, but they love to hear a successful story, a positive story. So people benefiting from this program and finding success in it would tell one parent and another parent, and one student would tell another student."

She said the secret to her success over other tutoring services is to offer individualized plans and keep parents, who often pay for the services, in the loop.

"We want to do whatever it takes to cater to everyone's individual needs," she said. "Maybe they have a learning disability they struggle with. It's just learning different approaches."

Hernandez said part of Morrison's success is providing a menu of services and a membership option, which costs $1,200 for a four-month package.

"I think Anna's doing a great job of creating a very unique space for herself," Hernandez said. "It started off as a basic tutoring service, but now she offers different types of tutoring to meet different needs."

Morrison said she's humbled by the award and would like to thank her family and the people that nominated her.

"The American dream is real. You work hard at what you want to achieve and you treat people fair and you will find success in whatever you do," she said. "I think sometimes that mentality is lost, especially for our generation."