Despite brisk hiring, rise in pay slowest since '82 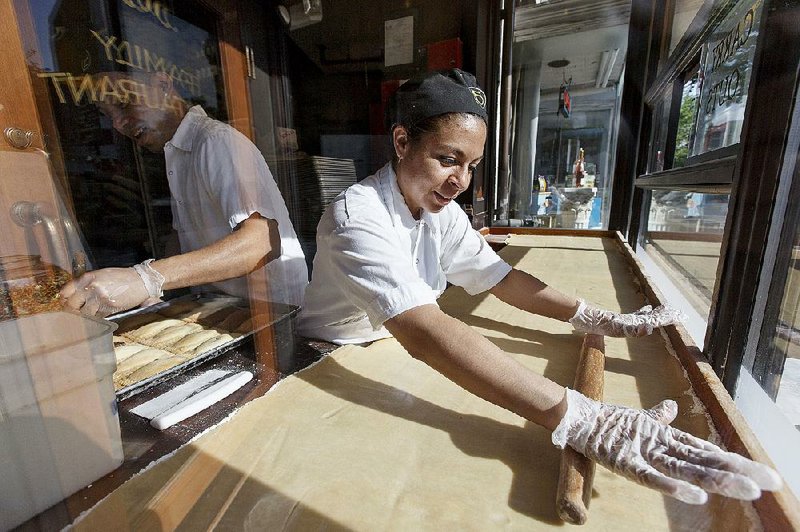 A baker works at Ted’s Bulletin, a Capitol Hill restaurant, in May. The Labor Department’s measurement of wages and benefits, the employment cost index, rose 0.2 percent in the April-June quarter.

WASHINGTON -- U.S. wages and benefits grew in the spring at the slowest pace in 33 years, evidence that stronger hiring isn't lifting paychecks much for most Americans. The slowdown also reflects a sharp drop-off in bonus and incentive pay for some workers.

Both measures recorded the smallest quarterly gains since the second quarter of 1982.

Salaries and benefits for private-sector workers were unchanged, the weakest showing since the government began tracking the data in 1980.

The disappointing figures come after the index had been pointing to a pickup in wage growth after nearly two years of steady hiring. The index rose just 2 percent in the second quarter compared with a year earlier. That is down from a 2.6 percent increase in the first quarter, which was the biggest in more than six years.

The slowdown suggests that companies are still able to find the workers they need without increasing pay, a sign the job market is not back to full health. That could cause some Federal Reserve officials to push for a delay in any increase in the short-term interest rate they control.

"Despite a tighter labor market and all of the stories about pay increases at various large firms, wage growth is not picking up meaningfully," said Jennifer Lee, an economist at BMO Capital Markets. "This may not sit well with [Fed] policymakers."

Fed Chairman Janet Yellen and her colleagues are counting on rising wages to power the economy and bring inflation closer to their 2 percent goal.

"For the people who were saying the Fed's got to raise rates in September, this is a shock," said Steven Ricchiuto, chief economist at Mizuho Securities USA Inc. in New York.

Employers have added nearly 3 million jobs in the past year, lowering the unemployment rate to 5.3 percent in June, down from 6.1 percent 12 months earlier. Most economists have expected those gains to force businesses to raise pay to attract and keep employees.

The Federal Reserve watches the employment cost index closely for signs that healthy hiring is pushing up wages. Strong increases could lead companies to raise prices for their goods to cover higher labor costs, increasing inflation. That would make the Fed more likely to raise the short-term interest rate it controls. Consumer prices have been tame in the past year, although in recent months they have moved higher.

In some occupations where bonuses are common, compensation fell sharply after spiking in the first quarter. Those include sales, professional services such as law and accounting, and management.

"Incentive-paid workers decelerated quite a bit this quarter, and that was almost the entire explanation for the wage portion" of the slowdown, Wayne Shelly, a Labor Department economist, said in a telephone interview.

The employment cost index figures now match the sluggish pace of growth reported in the average hourly pay data that's part of the monthly jobs report. Average hourly wages were up just 2 percent in June from a year earlier, the Labor Department said earlier this month.

Yet another measure of pay, compiled by the Federal Reserve Bank of Atlanta, shows wages are accelerating. Hourly pay for a typical employee rose 3.2 percent in June from 12 months earlier, according to the Atlanta Fed. While that is double the annual pace of 1.6 percent in February 2010, it is still below the pre-recession level of about 4 percent.

The lack of momentum in pay is one reason consumer confidence has failed to build on gains earlier this year. The University of Michigan said Friday that its final sentiment index for July decreased to 93.1 from 96.1 the prior month.

Nonetheless, it's held above 90 for eight straight months, the longest such period since a 17-month stretch ended in early 2005.

"Consumers still see the future income gains as their primary problem going forward," Richard Curtin, director of the Michigan Survey of Consumers, said on a Bloomberg conference call. "This really remains a sore point for consumers and will continue to hold down the overall rate of growth in consumption."

Information for this article was contributed by Christopher S. Rugaber of The Associated Press and by Michelle Jamrisko, Jeanna Smialek, Christopher Condon, Victoria Stilwell and Kristy Scheuble of Bloomberg News.

Print Headline: Despite brisk hiring, rise in pay slowest since '82