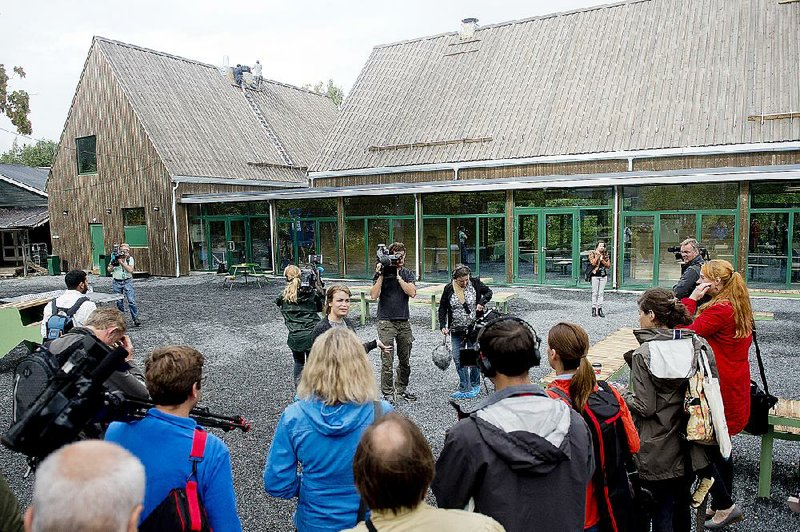 Ragnhild Kaski (center), secretary-general of the Labor Youth Party and a survivor of an extremist’s 2011 attack on a youth camp on the island of Utoya, speaks Wednesday at the reopening of the camp. (AP / JON OLAV NESVOLD )

UTOYA, Norway -- Four years ago a right-wing extremist gunned down 69 people, shattering the tranquility on the idyllic Norwegian island of Utoya after killing eight in a bomb blast at government buildings in the center of the capital, Oslo.

This week, a flood of newcomers will be arriving on the island as the Labor Party's youth camp opens for the first time since the massacre on July 22, 2011.

Emilie Bersaas, a camp organizer, said they won't allow "that dark day [to] overshadow the nice and bright" memories of past camps or future weekend youth meetings and social events organized by the party's youth wing, which owns the island about 25 miles from Oslo.

More than 1,000 students have enrolled for three days of seminars on politics that start Friday. Private visitors a day earlier will include NATO Secretary-General Jens Stoltenberg, a former Labor Party leader who was also Norway's prime minister at the time of the massacre.

Many of the island's traditional red-and-white wooden buildings have been renovated, and construction continued Wednesday to complete new conference and meeting rooms in Scandinavian-style glass and wood design. A bright circular steel memorial engraved with the victims' names has been given pride of place among pine trees on a secluded spot overlooking the Tyrifjorden lake.

Mani Hussaini, president of the youth group, believes that a good balance was found in constructing new buildings and restoring the old, describing it as "an important step" for going forward after the events of 2011.

Utoya will "always [be] a place where we honor and remember our comrades, a place to learn and a place for political engagement," he told reporters.

The murderous rampage of the self-styled "militant nationalist" Anders Behring Breivik, who randomly shot students as he walked through the island, shocked the nation of 5 million in the far north of Europe. About one in four people in Norway were affected by the massacre, through connections with family, friends, work or acquaintances of victims.

It also left lasting traces on Utoya, including the dark green cafeteria, which bears the bullet marks of the the shooting that left 13 people dead there. It has not been renovated and will open as a center for learning after another building has been built around it.

Survivor Ragnhild Kaski, secretary general of the youth organization, remembers with glee and excitement how she gave her first political speech in that fateful cafeteria, tinged with deep sorrow and emptiness at the loss of her friends.

"For me that building will always be the building where I was giving a speech for the very first time when I was 17. ... At the same time that's the place where people lost their lives and I was saving mine," she said. "So it kind of shows it's part of the island. You have both the good and the bad memories."

In 2012, Breivik was convicted of mass murder and terrorism and was given a 21-year prison sentence that can be extended for as long as he's deemed dangerous to society, which legal experts say likely means he will be locked up for life.

During the fourth anniversary commemoration ceremony in Oslo, Prime Minister Erna Solberg said July 22, 2011, always will remain a dark day in the country's history for "scenes of evil and heinous acts," and that the victims are "remembered with love" and will never be forgotten.

She later inaugurated a July 22 Center, which shows how the assailant carried out the attacks -- an initiative some opposed on the grounds that it was too poignant.

Since the shooting, 16 regional support groups and a national organization were set up to help families of the victims.

The victims' names, engraved in longhand on the memorial steel circle suspended in the air, glittered in the humid, cloudy air. The youngest was that of a 14-year-old boy; the oldest that of Breivik's first target on the island, a 45-year-old security guard.

But not all 69 names are there. Eight spaces have been left for those names parents have not wanted displayed.

"It's still too early for some now, and that's a natural thing I think," said Lisbeth Roynehold, whose 18-year-old daughter Synne was killed. "Because we grieve in different ways and some parents need more time."

Roynehold, who is the leader of a July 22 support group, welcomes the reopening of the camp.

"By going back to the island, I think the youngsters will fight for what my daughter fought for," she said.

"They are fighting for democracy."