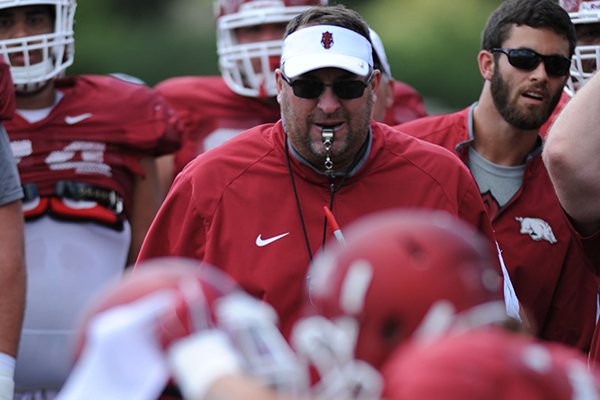 Several banks expressed serious interest in being the title sponsor for the Little Rock Touchdown Club after Metropolitan Bank sold to Simmons Bank.

Including Simmons, which wanted to be more than nearby and neighborly. It wanted more than just the great location for its logo every Monday at the luncheons.

It wanted to make the meetings bigger and better, so it offered two things: Money to be the title sponsor, and to help bring in national speakers.

When hundreds met Tuesday in the Simmons Bank lobby on Capitol and Broadway for David Bazzel's announcement regarding this year's speakers -- one of the best-kept secrets in the country -- excitement was everywhere.

Once again Arkansas Coach Bret Bielema will kick off the season. He will speak Monday, Aug. 24, and while many things have been learned about the Arkansas football coach, one of the most obvious is that he intends to win every news conference.

He is enthusiastic, energetic and passionate. He also has a keen wit. The lunch with him will be at the Marriott Hotel ballroom. All other meetings will be at Embassy Suites.

The second meeting will be two former Razorback football greats, former teammates Peyton Hillis and Felix Jones, on Monday, Aug. 31. Both played in the NFL.

The third meeting will be Tuesday, Sept. 8, and will feature Charlie Weis, the former head coach at Notre Dame and Kansas after serving as offensive coordinator for the New England Patriots. He helped them win three Super Bowls.

Bazzel keeps a close eye on big-name coaches who are currently between jobs.

The remainder of the regular meetings will be on Monday, and the season-ending finale, the LRTDC Awards Banquet, will be Thursday, Feb. 11. The speaker for that event will be announced Thursday.

NFL Hall of Famer and Heisman Trophy winner Tim Brown (Sept. 14) will be the fourth speaker. (Bazzel also likes to schedule speakers who won the Heisman).

UA Athletic Director Jeff Long is next, on Sept. 21, and he always brings insight into the entire Razorbacks athletic program and perhaps the college football playoffs.

The former Tennessee quarterback who could throw a football through a brick wall, Heath Shuler, comes in for the seventh week (Sept. 28). Shuler is a businessman these days, but after playing for Tennessee and in the NFL he was a U.S. representative for six years in North Carolina.

Jay Barker, who led Alabama to the 1992 national championship, will speak Oct. 5. Barker also played in the NFL and in Canada, but now he serves as a radio personality in Birmingham, Ala., and is married to country singer Sara Evans.

Stephen Jones, chief operating officer for the Dallas Cowboys, comes to town Oct. 12, and this former Razorback football player and member of the Arkansas Sports Hall of Fame can offer a great perspective on the Cowboys, the NFL and the Razorbacks.

Next up will be former Texas Longhorns coach Mack Brown (Oct. 19). He led the Longhorns to the national championship in 2005. He was asked by several former Longhorns to make this appearance for the James Street Award.

The next Monday, Nov. 9, will feature the next class to be inducted into the Southwest Conference Hall of Fame. Tickets will go fast.

The season will wrap up with a personal favorite, George Schroeder, a national college writer for USA Today. Schroeder is a native of Little Rock, and his first job was at the Arkansas Democrat-Gazette.

Membership is open, and dues are just $60. More information is available online at LRTouchdown.com.