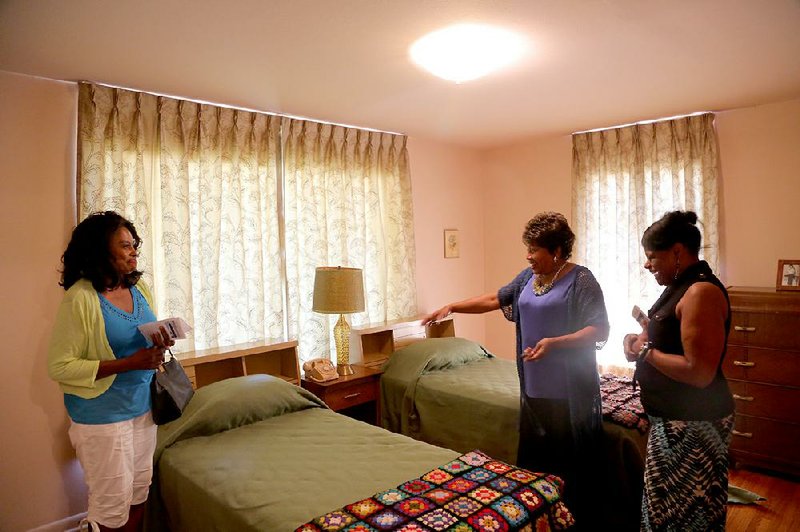 Mary Hardin (center) gives a tour of the home of Daisy Gatson Bates on Wednesday to guests Delores Paul (left) of Little Rock and Charleszella Mikel of Jackson, Miss.

In the shade of a carport, rows of folding chairs stood Wednesday morning where a burning cross once was left as a message for civil-rights activist Daisy Lee Gatson Bates. 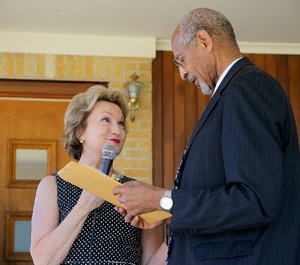 Photo by Stephen B. Thornton
Arkansas first lady Susan Hutchinson presents her order for a personalized brick to Dale Charles, a board member of the L.C. & Daisy Bates Museum Foundation, on Wednesday in Little Rock. The brick sale aims to raise money for renovations at the former home of civil-rights activist Daisy Lee Gatson Bates.

About 20 people gathered outside Bates' brick home on West 28th Street in Little Rock for the announcement of a fundraiser for the L.C. and Daisy Bates House and Museum -- the sale of inscribed bricks to line the sidewalk outside the 1955 home. Arkansas first lady Susan Hutchinson will serve as fundraiser co-chairman.

"We cannot let this epicenter of history fall to the wayside," Hutchinson said Wednesday after announcing she would purchase a brick to support the museum.

The 1,800-square-foot ranch-style home served as the command post for civil-rights activists during the 1957 Little Rock Central High School desegregation, and Bates was a mentor to the students who integrated the school and became known as the Little Rock Nine.

Activists such as the late Supreme Court Justice Thurgood Marshall and the Rev. Martin Luther King Jr. sometimes slept in the small guest bedroom with the peacock chenille bedspread.

Daisy Bates served as president of the Arkansas conference of the NAACP and as co-publisher -- with her husband, L.C. Bates -- of the Arkansas State Press, a weekly statewide newspaper devoted to advocating civil rights for blacks. The long table in their basement was a meeting place for the NAACP Youth Council.

C. Diane Charles, board member of the L.C. & Daisy Bates Museum Foundation, remembers sitting at that table as a youth council member. Standing in the living room surrounded by replica furniture and blue walls the color of robins' eggs Wednesday, she looked out the large window. At the height of desegregation, a rock once was thrown through it, she said. "Stone this time. Dynamite next," the note read.

Charles grew up around the corner and remembers the fear neighbors had for Daisy Bates' safety. Through all the threats, Bates remained warm, loving and determined, Charles said.

"As a young woman, I never expected to be standing here in the future, honoring this as a historical site," Charles said. "But it really is -- so much happened here."

A few black-and-white photos line the walls of the home. Above the replica television, one framed photo shows Bates sitting down watching Gov. Orval Faubus' announcement that he had closed all Little Rock high schools for the 1958-59 school year to block further desegregation.

Delores Paul of Little Rock and Charleszella Mikel of Jackson, Miss., leaned in to look at the photo. During their tour of the home, they laughed at the pink tile in the bathroom and peeked in the shoe closet.

The two lingered in the living room before stepping onto the driveway, sharing memories of growing up in the neighborhood, hearing stories of the woman who lived in the small brick house and had such an effect on history.

"I've always wanted to see inside," Paul said. "I was just a young girl in 1957, but I remember my parents reading the newspaper every day. This affected all of us. I'm thrilled to say I got to walk inside and see where it all was organized."

Mary Hardin of the Bates Foundation hopes the fundraiser will allow people to see more than just the plaque in the yard designating the home as a national historic landmark. Hardin leads tours through the house by appointment only and gives three or four a month.

"We'd love to have this more open to the public," she said. "So many in Little Rock are unaware of the significance of what is here."

The Bates Foundation's treasurer, Dale Charles, said the goal is to sell 2,120 bricks at $100 each. The bricks are 4 inches by 8 inches and can have three lines of inscribed print.

The money will go toward refinishing furniture and restoring the basement where Bates held the NAACP Youth Council meetings, he said.

Bates died in 1999, but her role in history cannot be understated, Charles said.

"Her work wasn't just about getting kids to Central High School," he said. "She and L.C. made a great sacrifice for humanity. We want to honor that."