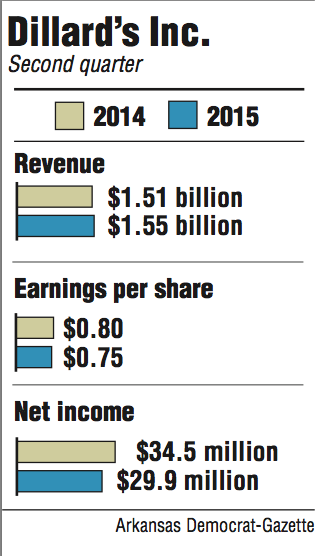 The department store saw $1.55 billion in total revenue during the second quarter, compared with $1.51 billion a year ago.

Analysts were expecting 72 cents per share on $1.53 billion in revenue.

Dillard's shares rose $2.23, or 2.4 percent, to close Thursday at $97.03 on the New York Stock Exchange. The company's shares traded between $95.53 and $103.09 during the day. Dillard's released its financial results Thursday before the market opened.

"While we achieved positive comparable store sales, we were disappointed with our overall performance compared to the prior year," William Dillard, chief executive officer, said in a prepared statement. "However, from our strong cash position, we returned $208 million to shareholders under our share repurchase program."

Williams said Dillard's repurchase program was a sign of a sluggish economy.

"They can't figure out a better place to deploy capital right now because the economy is so tough," he said.

Dillard's said sales in comparable stores rose 1 percent. Total merchandise sales, which excludes CDI, were $1.468 billion during the second quarter, up from $1.461 billion a year ago.

The company said sales were strongest in shoes, and juniors and children's apparel. They were "notably weak" in the home and furniture category, Dillard's said.

As of Aug. 1, Dillard's has bought back about 1.8 million shares of Class A Common Stock under its $500 million share repurchase program.

Dillard's opened a new 200,000-square-foot store in Murray, Utah, on Saturday and plans to open a new store in Louisiana and a store in Ohio during the third quarter.

Dillard's has 272 locations with 25 clearance centers in 29 states.