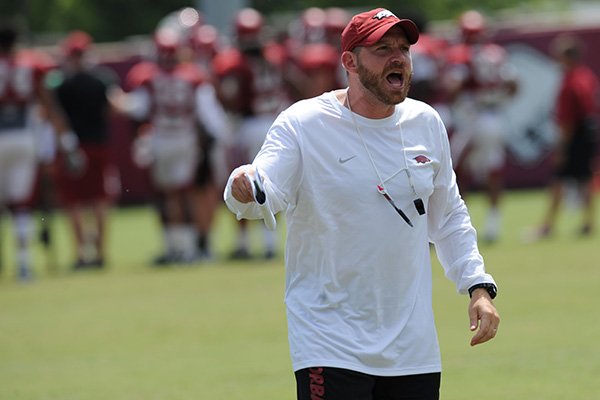 FAYETTEVILLE -- The Arkansas Razorbacks rallied Friday from a poor practice the day before which drew criticism from Coach Bret Bielema and the potential for a heavier workload.

Instead of dishing two practices Friday, Bielema and his staff gave the team film critique and meetings in the morning and a longer break in the afternoon before revisiting much of Thursday's practice plan during the workout.

"We made just little, minute mistakes that we believe are not going to help us win," senior safety Rohan Gaines said. "What we did was the things we did [Thursday] yesterday. We went over the same things again today and corrected them and made it better."

"He came and told us after practice that things were way better," Jackson said. "You could feel that things were better. Yesterday we were just dragging. You could just feel it in the air and see how everybody was moving."

Defensive end Tevin Beanum said coordinator Robb Smith "kicked us in the butt" and that team leaders spread the word that Thursday's performance wouldn't cut it.

"It's just about getting certain people going," Beanum said. "It's like a disease or an infection that spreads. We started with people we knew would come with some tempo, come with a little energy, and I think it kind of took over the whole team."

Jackson said Bielema made it known Thursday he wouldn't pile a heavy physical burden on players the day before the first live tackling.

"Coach B came to us right after practice and told us we weren't going to have a two-a-day [on Friday]," Jackson said. "With the scrimmage,0. he didn't want to work us too hard."

Sophomore Tevin Beanum made a diving interception on a pass tipped by Jared Collins on Tuesday to record the first interception against quarterback Brandon Allen since a regular season game at Mississippi State last year.

"I was in coverage on that play," Beanum said. "They tell us to just turn, smart swarm to the ball. J.C. made a great play on the ball and I was just there to catch it."

Beanum, of Forrest City, said he was most happy about the turnover because it swung momentum in the practice.

"What made me feel good about it is we were kind of in a rut," he said. "The plays before that we were kind of getting our butts handed to us. That play turned things around and we were taking it to the offense for a good three or four periods."

The Razorbacks will scrimmage today at Reynolds Razorback Stadium, with the workout closed to all but media and Razorback Foundation members and their guests.

On Sunday, Arkansas will conduct its annual fan day from 2 p.m. to 4 p.m. at the stadium. Gates 1, 12 and 16 will open at 2 p.m. Razorbacks players and coaches are asked to sign one item per person. The Golden Boot trophy, won by Arkansas for its 17-0 victory over LSU, and the Texas Bowl Trophy for its 31-7 victory over Texas will be on display for fan pictures.

Sophomore Dwayne Eugene has moved from weak side linebacker to the strong side. Freshman Dre Greenlaw is now backing up Brooks Ellis on the weak side.

Greenlaw, who was also Ellis' teammate at Fayetteville High, said linebackers coach Vernon Hargreaves announced the change to players in a meeting

"When he told me that I was like, this is my opportunity to just do what I do best," Greenlaw said.

Greenlaw, 6-0, has increased his weight from 217 pounds to 229 after going through summer workouts with strength and conditioning coach Ben Herbert.

"I'm carrying it pretty good for the most part," Greenlaw said. "I've felt like I've gotten more explosive, and it's not just putting all the weight on me, but slowly building it up."

"Camp practice is a big jump from high school, so I've just been trying to work hard and do everything the coaches are telling me," Sykes said. "I've been getting better every day, not making the same mistakes twice.

"It feels good to be getting reps out there with the twos. I'm just making sure I'm still humble."

"He's a young guy also, but he knows a lot about the defense," Sykes said. "Every chance he gets, he's breaking it down for me and making sure I know it."

The Razorbacks have three jersey numbers -- 8, 9 and 16 -- that are taken by three different players.

Quarterback Austin Allen, defensive back Nate Dalton and punter Blake Johnson are all wearing No. 8 in camp.

No. 9 is donned by quarterback Rafe Peavey, safety Santos Ramirez and kicker Cole Hedlund, all redshirt freshmen. Ramirez and Hedlund each switched over to the number before spring drills.

On game days, players can wear the same jersey number as long as they don't take the field for the same play.

Tight end Hunter Henry said he doesn't get nervous when scouts are at practice.

Henry is one of several highly regarded juniors -- including linemen Denver Kirkland and Dan Skipper and tailback Alex Collins -- who could consider early entry into the NFL Draft if they have a big season.

Defensive end JaMichael Winston and offensive tackle Denver Kirkland often work against each other in individual drills and team periods.

"JaMichael is very confident at what he's doing," Kirkland said. "Even if he does something wrong, he's still got that confidence in his ability and he's going to come back at you hard the next play."

"You're going to win some reps and you're going to lose some," Segrest said. "The whole thing is just being consistent, coming back and realizing what you did wrong and making those corrections on the next rep, and that's what JaMichael does."

"He's playing real fast and he's a big man," Pittman said. "He's playing with leverage and he'll hit you. He's starting to enjoy it. He got a little dinged up in his shoulder [Tuesday] and didn't miss a rep."

"He says to keep on going and make sure I don't let him down," Gibson said. "He's been saying some good things about me, so I just go and play as hard as I can. That's all I've been doing."