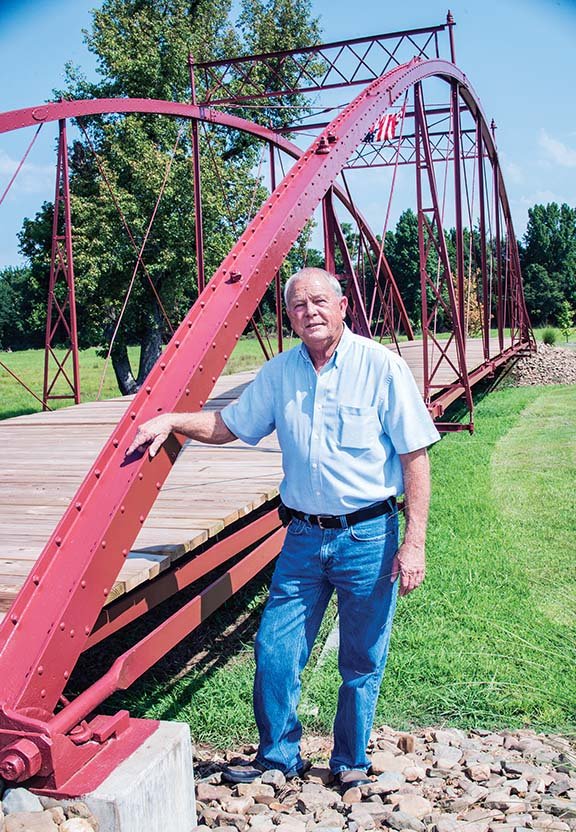 Jerry Pendergraft, Danville city manager, stands next to the Danville-Mickles Bridge, the second oldest bridge in Arkansas. The city of Danville and Yell County led a restoration effort for the bridge, which once was located over the Petit Jean River. The bridge was moved from its original location and restored, and now sits as part of a walking trail next to the Danville City Hall.

DANVILLE — Thanks to a cadre of volunteers from far and wide, the Danville-Mickles Bridge has a new home.

Once in disrepair, hanging onto the banks of the Petit Jean River just east of Danville in the Mickles community, the iron bowstring truss bridge now sits next to the Danville City Hall. Built by the King Iron Bridge and Manufacturing Co. in 1880, the bridge was moved in 2013 to its new home and is now part of the Bowstring Trail that winds around City Hall and the Leon Millsap Senior Activity Center.

Jerry Pendergraft, Danville city manager, said a formal dedication ceremony for the bridge is planned for the near future.

“We did it all with

The Danville-Mickles Bridge, which was moved from Danville to Mickles in the early 1920s, was built across the Petit Jean River as a link between southern and central Yell County to western and northern Yell County — from Danville to Havana to the west and from Danville and Dardanelle to the north. The bridge was part of a trade route for carrying supplies from Dardanelle, situated on the Arkansas River, to Danville.

The bridge was listed on the National Register of Historic Places in 2007.

Pendergraft said interest in the bridge was piqued by stories published in the Yell County Record newspaper a few years ago about a feud that resulted in two men being hung off the bridge in 1883.

Pendergraft said J. Randall Houp of Booneville, a member of the Yell County

Historical and Genealogical Society, “brought our attention to the bridge.”

Houp discovered information about the feud as he was researching the bridge. He shared the history of the bridge through a series of articles in the county newspaper. He and Mary Fisher, editor at the time of the Yell County Record, teamed up in 2008 to begin the campaign to save the bridge.

“I got on board and began calling people,” Pendergraft said. “This is my hometown. Mr. Houp got me started [on the preservation campaign], and I couldn’t let go.

“I did a lot of begging,” Pendergraft said, laughing.

“Yell County Judge Mark Throne helped us build a temporary road so we could go in and remove the bridge. Everything just fell into place,” he said. “So many people donated their time and service. Even people that didn’t live in the county helped us.

“It just shows what you can do when you get started. It was a four-year project, but the result sits outside City Hall. People stop to look at the bridge. Kids play on it, walk on it. It’s there for the community.”