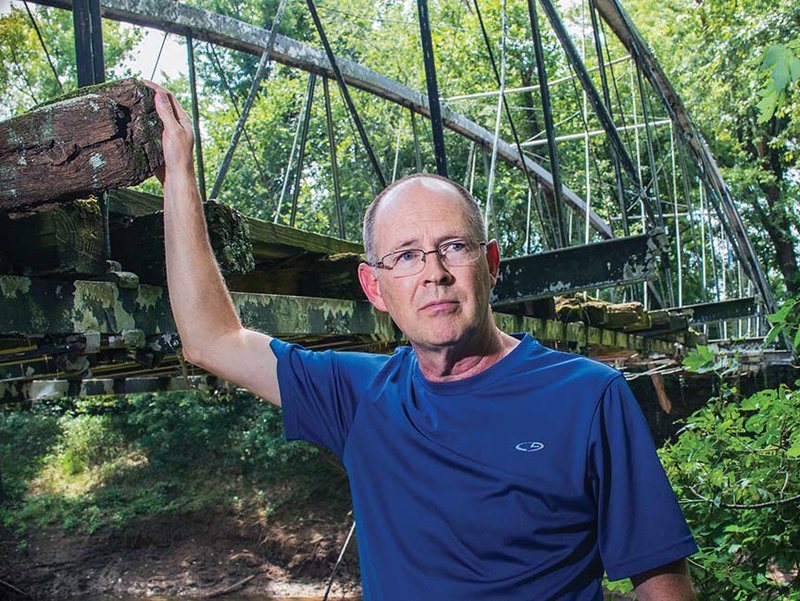 Kenneth Barnes, a member of the Faulkner County Historical Society, heads up the effort to save the Springfield-Des Arc Bridge, which was built in 1874 on the north branch of Cadron Creek, which separates Faulkner and Conway counties. ( William Harvey)

Back in the day, the Springfield-Des Arc Bridge was an important part of a trade route that connected Des Arc on the White River in Prairie County with Springfield, which was the seat of government in Conway County from 1850-1873. Des Arc was a steamboat landing on the White River.

Today, the bridge stands desolate and in disrepair, no longer connecting Faulkner County with Conway County.

The bridge is approachable by foot — only through an array of weeds and bushes littered with trash — off Springfield Road north of Wooster in Faulkner County.

Little of the decking remains on the bridge, but the iron trusses continue to hold it up. Those who wish to preserve this piece of history ask, “But for how long?”

The Historic Preservation Alliance of Arkansas has placed the bridge on the 2015 List of the Eight Most Endangered Historic Properties in Arkansas (see the website preservearkansas.org).

Kenneth Barnes, who teaches history at the University of Central Arkansas in Conway, is a member of the Faulkner County Historical Society, which is trying to save the old bridge that crosses the north branch of Cadron Creek that separates Faulkner and Conway counties.

“Preservation experts think that if it’s not preserved, [the bridge] will likely fall into the creek,” Barnes said.

He said the iron bowstring truss bridge was built in 1874 by the King Bridge Manufactory and Iron Works in Iola, Kansas.

“It is the oldest bridge in Arkansas and the second oldest of its type in the United States,” he said. “The bridge went out of service in 1991 when the road was relocated and has been deteriorating ever since.”

The Springfield-Des Arc Bridge was nominated to the National Register of Historic Places in 1988.

Information on the bridge can be found on the Arkansas Historic Preservation Program’s website, www.arkansaspreservation.com. Click on properties, National Register of Historic Places, Faulkner County and Springfield Bridge for a description of the bridge as “an unaltered example of a cast and wrought iron tubular arch bridge” design patented by Zenas King in 1861 and 1866. That report describes King as a “significant 19th-century bridge builder” credited with being the first to develop a practical system for mass-producing bowstring arch bridges.

Barnes said several floods have threatened the bridge in the past, especially those in 1882, 1927 and 1982.

“In 1927, water was over the deck of the bridge,” Barnes said. “Photographs show the bridge tied to a tree so it wouldn’t float away.

“Not only has flooding damaged the deck of the bridge; it has also caused erosion around the piers,” he said.

Barnes said another threat to the bridge is vandalism.

“The bridge is in a remote location,” he said. “People have had parties on and around the bridge and have trashed the area. At least two fires have been started on its deck. You can no longer walk on the deck because of fire damage. The fires have also damaged the trusses.

“Robert Scoggin (a historian for the Arkansas Highway and Transportation Department) said he doesn’t think the bridge will be standing in five years.”

It is this kind of report that has led the Faulkner County Historic Society to get involved and launch a preservation campaign for the bridge.

Barnes said there has been much discussion regarding how to restore the bridge and whether to restore it on-site or move it to a more suitable location.

“The preservationists we talk to think it would be best to move the bridge to a more secure site,” Barnes said.

He said one of the first hurdles the Historical Society had to overcome was the question of ownership.

“We’ve talked to the cities and the counties involved, and the Conway County judge has turned over ownership to Faulkner County. We’ve talked to the city of Conway, Mayor [Tab] Townsell and Steve Ibbotson, director of Conway Parks and Recreation, and they have agreed — in principle, at least — to incorporate the bridge into the Tucker Creek bike/walk trail system — somewhere to be determined.”

The Conway City Council, during its May 26 meeting, voted 7-0 to “accept the acquisition of the historic Springfield Bowstring Bridge.”

According to the minutes of the City Council meeting, which can be found at cityofconway.org, “Mayor Townsell stated the bridge is 140 feet wide, which may or may not fit in Tucker Creek. We will have to make that decision as a council. Mayor Townsell explained the main criteria the [Faulkner County Historical Society] has is the bridge has to stand over water, and there are many options for that.”

The City Council meeting minutes also state, “Mayor Townsell stated this is a request to sign off on the concept; we are not funding anything as of right now.”

Barnes said another hurdle to climb involves the landowners on either side of the bridge.

“We have contacted some, but not others,” Barnes said. “One landowner does not want the bridge removed.

“Another question is, ‘How do we fund all of this?’ Now that we have a tentative place for relocating the bridge, the Faulkner County Historical Society will start applying for grants, seeking in-kind services, donations, whatever we can find.

“We will also be looking for businesses and individuals with the expertise to move a bridge and to restore it. We know the King Bridge Co. has a grant program for preserving its bridges. They know of its existence.”

Barnes said a similar bridge was moved and restored in Danville. (See the accompanying story on the Danville-Mickles Bridge in today’s River Valley & Ozark Edition.)

“It was rescued and preserved by the city of Danville and Yell County,” Barnes said. “Surely Conway and Faulkner County can do the same with our historic bridge.”

Barnes said preservation efforts for the bridge have been considered in years past, but none has come to fruition. Information on the Historic Preservation Alliance of Arkansas website states, “Preservation in place may not be an option, but there exist others. The bowstring design lends itself to being moved. A successful ‘save’ of this bridge could therefore consist of either its restoration in place, or disassembly, refurbishment and relocation to a similar but more visible setting, preserving a historic engineering monument while placing it more firmly in the public eye.”

Barnes said that is what the Faulkner County Historical Society hopes to do.