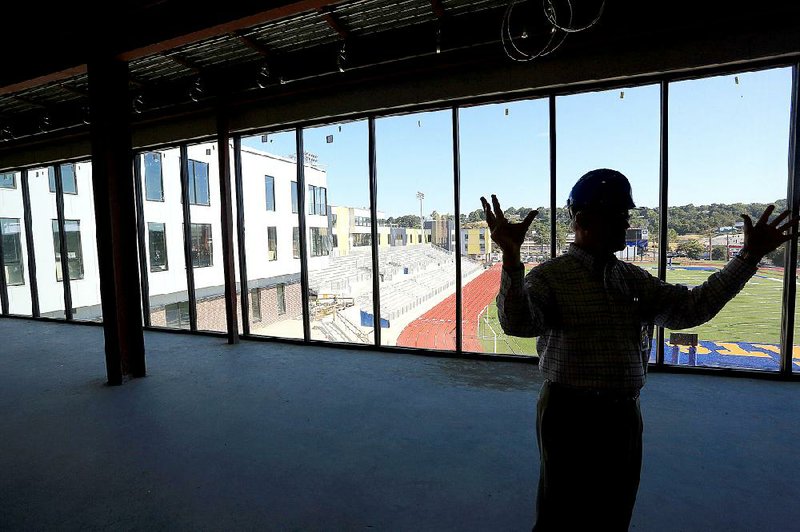 North Little Rock School District Superintendent Kelly Rodgers leads a tour of the new portions of the city’s high school Thursday. Classes at the school, parts of which are still under construction, will begin Monday. ( Rick McFarland)

When students return to school Monday for the 2015-16 school year, the curtain will be lifted on the renovated and expanded North Little Rock High School. 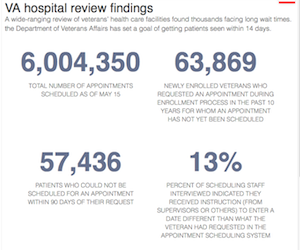 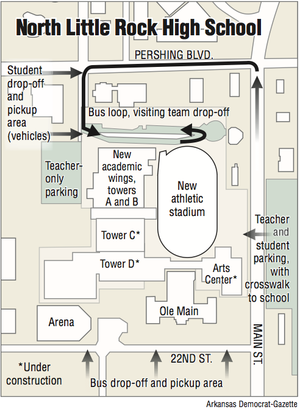 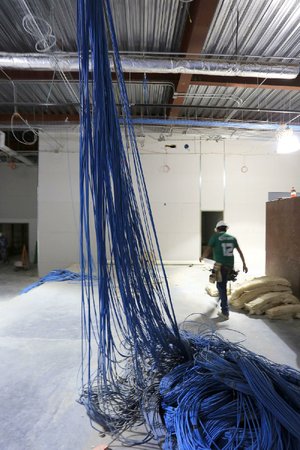 The North Little Rock School District's $245 million capital improvement plan -- backed by a voter-approved 7.4-mill school tax increase in February 2012 -- is the largest and most comprehensive in Arkansas history.

The districtwide project is winding down. At the project's start, the district had 21 campuses. The count is now down to 14 schools with one more -- the High School Sophomore Campus -- to close within the school year. Twelve of the remaining 13 campuses have either newly built schools or schools that are undergoing extensive remodeling.

Much of the building program money -- $109 million -- is going into the renovations and additions at North Little Rock High School, also widely known as the former Ole Main High on Main Street.

The ninth-graders will generally be in the school's original building at Main and 22nd streets. Juniors and seniors will be in the newly completed sections of the campus, while 10th-graders will attend most classes and eat lunches in the former Poplar Street school, two blocks away, for at least part of this school year.

Rodgers said many ninth- and 10th-graders will take elective courses in subjects such as art and broadcasting in the new parts of the campus. High School Principal Randy Rutherford and his staff have blocked off parts of the school day for the 10th-graders to travel from the Poplar Street school to take those electives. There won't be students going back and forth all day, Rodgers said.

If all goes according to plan, all 2,500 ninth- through 12th-graders could be on the renovated and expanded campus after the winter break, Rodgers said. Even then, work on the gymnasium and performing arts center will not be completed.

The district will need the two-week winter break to move the freshmen and sophomores on the campus, which will have capacity for 3,000 students. If the district can't make the move during that break, it may not be possible to move the students until after this school year, he said.

Classrooms in the 488,000-square-foot high school development are in four multistory "learning towers."

Each tower has assistant principal and counselor offices, an atrium and a set of "learning stairs" that can become student seating for large group activities and presentations.

The architectural design supports the district's emphasis on project-based learning and science, technology and arts-based curriculum, Rodgers said while hosting a tour of the campus last week.

The four buildings that will hold classes, known as Towers A, B, C and D, wrap around the western and southern sides of the completed all-new football field, tied together by the incomplete press box.

Tower A currently houses athletics. When athletics moves to its separate space in two weeks, the open space on the bottom floor of Tower A will be used for teacher parking, Rodgers said.

Art, family and consumer science courses are in the completed Tower B, with culinary and broadcast courses on the bottom floor.

The mostly complete Tower C will be for science, technology, engineering and mathematics courses.

Tower D will open in November with freshman classrooms and a media center.

"We're all about supporting students' passions here and putting them in the right place so they can pursue those passions," Toland said.

A third-floor hallway connects all of the towers, and the two-story commons area/cafeteria, behind the existing Ole Main building, which will eventually be converted into office space for district employees and educational organizations, Rodgers said.

To further prevent students from entering construction areas, an additional 13 hall monitors have been hired, Rodgers said, and teachers are asked to stand outside their classrooms during all six-minute class-changing periods.

These measures were also added to help students navigate the school's layout, he said.

"There will be a lot of walking," said Caroline Faulkner, an assistant principal. "They will get their exercise."

It will take some getting used to, Rodgers said.

Faculty and staff members routinely stopped Rodgers during the tour Thursday to either ask for directions or to tell him that they were trying to get the lay of the land.

A few familiar buildings remain, such as the Ole Main building and the relatively new athletic arena.

But the original music and science buildings west of Ole Main have been torn down and replaced with food service space and school administration offices. A new gym will be located north of the existing arena.

To the south, the red skeleton of the performing arts center stands. When it opens in 2016, there will be theater and music courses, a 1,000-seat auditorium, a black box theater, the school's band room, a common area and the cafeteria.

The band room will connect to the completed football field through a tunnel.