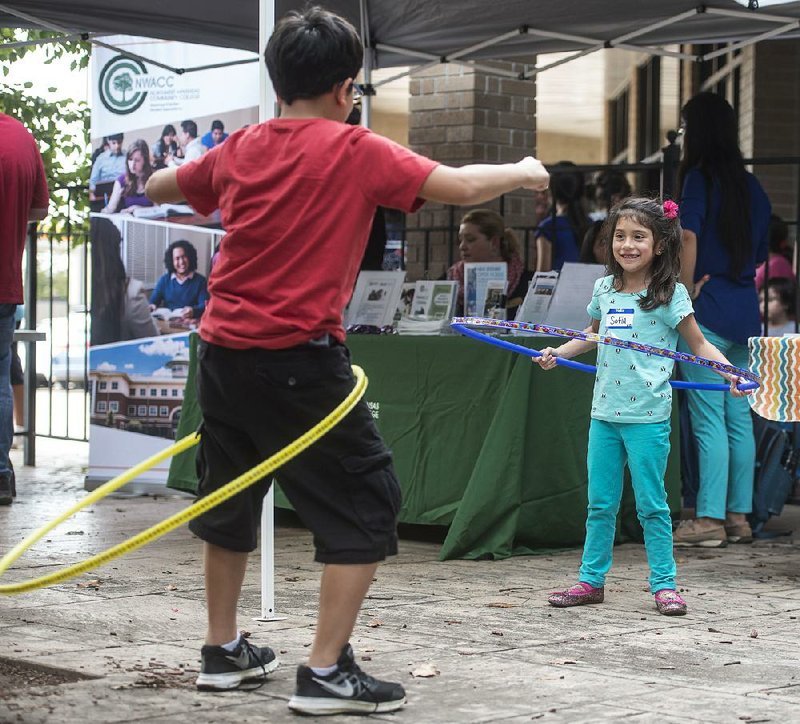 Sofia Ramirez, 5, watches Tuesday as her brother, Fernando, 9, tries a Hula Hoop during a block party and ribbon cutting for the Immigrant Resource Center in Springdale. The center is the first of five planned for the state.

The Immigrant Resource Center is hosting a community meeting at 6 p.m. Aug. 27 at its office at 1301 E. Robinson Ave., Suite B6 in Springdale. The Arkansas United Community Coalition will be surveying community members to determine main concerns and create projects. Call 479-463-2822 for additional information.

The project is a collaboration between Arkansas United Community Coalition and Catholic Charities Immigration Services.

"We're trying to fill those gaps of information of what they need," said Mireya Reith, executive director of the Arkansas United Community Coalition. She's also heading immigrant resource centers. "It's the merging of two models."

The Community Coalition started in 2012 and focuses on grassroots organizing, training and awareness- and coalition-building campaigns. Catholic Charities' Springdale office opened in 1997 and provides low-cost immigration counseling and support.

Yessie Hernandez of Springdale attended a candidate school at the center last month. She unsuccessfully ran for seats in the Arkansas House in 2012 and the Washington County Quorum Court last year.

"The classes help educate people. In the future I would like to run again and want to be more prepared on what is going on and what changes need to be done," she said.

Hernandez was born in El Salvador and came to the United States as a child. Her mother was already a legal resident and Hernandez said she didn't go through immigration issues facing thousands of Arkansans.

The Hispanic community isn't the only immigrant group growing, and Reith said the program is for all immigrants. She said she has meet with members of Northwest Arkansas' Marshallese, Hmong and Indian communities. Nearly 3,000 eastern Indians and between 10,000 and 14,000 Marshallese call the area home.

Frank Head, director of Catholic Charities Immigration Services, said his office at 2022 W. Sunset Ave. in Springdale will continue to offer assistance, and he hopes the additional site at the immigrant resource center will reach a broader spectrum of people.

He said the Springdale immigration office helps about 1,500 clients each year. Immigrants from 37 countries used the program last year, but about 70 percent were from Spanish-speaking countries and the majority were from Mexico, Head said.

About half the people looking for help are in the country legally, he said.

The idea of creating the immigrant center gained speed in November after President Barack Obama said the immigration system is broken and the focus needs to be on deporting people who threaten national security and public safety instead of families.

Jeannie Burlsworth, founder and chairwoman of Secure Arkansas, said Tuesday the country's immigration policy is fine, it just needs to be enforced.

"It's there, and it's the law," she said. "What we need is a moratorium on immigration to get everything stabilized and see where we are at. Immigration policies are not being enforced."

Springdale Mayor Doug Sprouse attended Tuesday's celebration and said the center isn't about the politics of immigration policy, but about helping neighbors connect to resources.

"Cities deal with the realities on the ground," Sprouse said. "I think resources like this that help new residents assimiliate is a plus for Springdale and all of Northwest Arkansas."

Head said many immigrants don't know their options, such as the Deferred Action for Childhood Arrivals program. It offers two-year work permits for people who came to the United States as children and meet several guidelines such as age, residency and educational background.

Reith said there are about 40,000 legal permanent residents in Arkansas and about 11,000 students eligible for the Deferred Action for Childhood Arrivals program. Less than half of qualified deferred action immigrants have applied, she said.

"When we find them, we do a great job of getting them approved," she said.

Reith said they are opening in locations where they had previous partnerships. Organizations are donating space for the center. She hopes to open one in the northeast corner of the state by year's end.

The program gives youth an opportunity to come out of the shadows, she said. The Arkansas United Community Coalition has helped 1,395 immigrants with citizenship and Deferred Action for Childhood Arrivals applications since 2012.

Zessna Garcia Rios got her Deferred Action for Childhood Arrivals permit in 2012. She is a recent graduate of the University of Arkansas and started in July as an American Dream Fellow at the Cisneros Center for New Americans in Springdale.

"I was undocumented for 23 years. Through DACA I was able to get an internship with a big local company and was able to finish my college education," she said.

The Cisneros Center for New Americans opened a year ago in Springdale and is developing programs to help immigrants integrate into Northwest Arkansas.

Rios said she has volunteered for several organizations, including Arkansas United Community Coalition, over the years and became very educated about available resources. A local attorney helped her gain her two-year work permit.

"The center will make it easier for others to access that resource," she said. "Having locations across the state will be very beneficial to people that need those services."