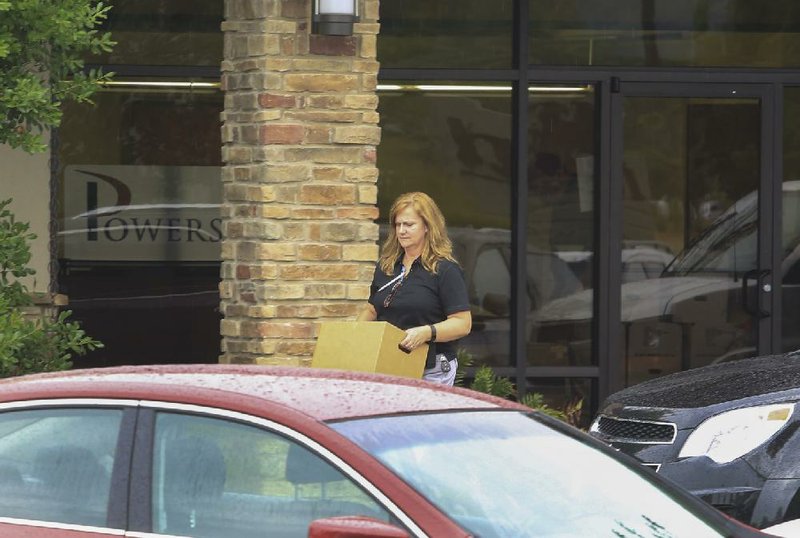 Agents with the federal Office of the Inspector General converged on Powers of Arkansas, 5440 NorthShore Drive in North Little Rock, on Wednesday. They removed several boxes of items. ( Rick McFarland)

CORRECTION: Ross Alan Hope is the chief executive officer of Powers of Arkansas. This article incorrectly identified the CEO.

Special agents of the U.S. Office of Inspector General on Wednesday raided the offices of a North Little Rock energy company and its in-house subcontractor.

Powers of Arkansas and Dav Construction, which operate at 5440 NorthShore Drive, were closed most of the day as federal agents searched the property. More than a dozen agents, some of whom were armed and wore bullet-resistant vests, could be seen Wednesday afternoon removing boxes from the building and stacking them in vans. Employees of surrounding businesses said the raid began about 7 a.m.

Further details of the raid, such as what was seized and which federal department was behind it, were unclear. Spokesmen for the Little Rock offices of the FBI and U.S. Drug Enforcement Administration said their respective agencies were not involved.

Powers of Arkansas President and CEO Ronald Alan Hope said he knew little about the search and seizure other than that it "seems to involve" Dav Construction.

"This is a total surprise, and we don't really know anything that's brought this on or caused this, but we're going to find out everything we can," he said.

Most of the contracts were awarded for heating, ventilation and air-conditioning services.

State business filings list James Wells of Sherwood as the president of Dav Construction. Hope is listed as an incorporator and organizer.

A phone number listed for Wells was not in service Wednesday.