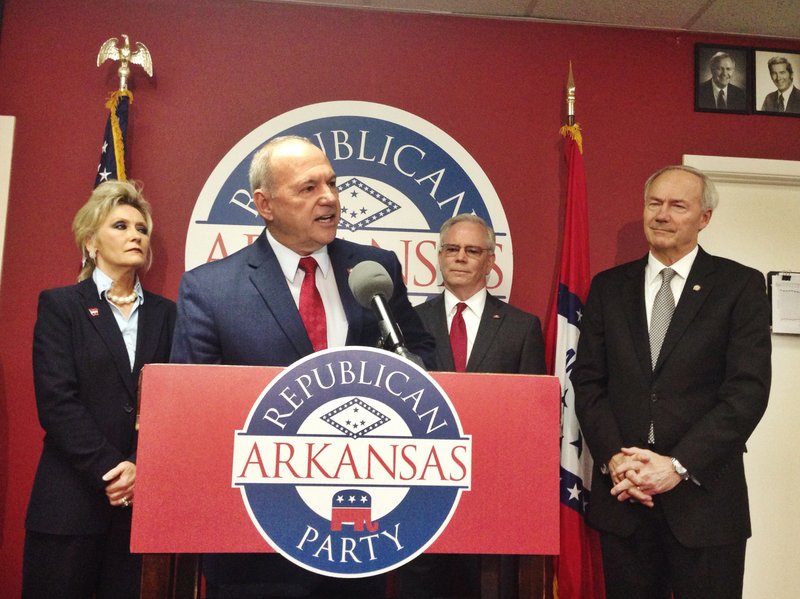 State Rep. Mike Holcomb of Pine Bluff says during a news conference Thursday, Aug. 20, 2015, that he's leaving the Democratic Party and will seek re-election as a Republican.

State Rep. Mike Holcomb of Pine Bluff is leaving the Democratic Party and will seek re-election as a Republican.

“I believe it’s my job to represent the views of those who have elected me, and I can best represent them by being a Republican,” Holcomb said.

He said his views deviate from the Democratic Party’s positions on abortion and same-sex marriage and that he believes his values align more with the Republican Party’s. He thanked Hutchinson for his move to defund Planned Parenthood and reaffirmed his support for traditional marriage.

Holcomb is the first state legislator to leave the Democratic Party since November, when a GOP majority took over statewide offices, but Webb said there may be other Democrats looking to switch parties soon.

“We’re now starting to see others looking at running as Republicans this fall,” Webb said, but did not elaborate when asked who else might change parties.

Holcomb represents District 10, which includes parts of of Lincoln, Cleveland, Grant, Drew and Jefferson counties. He was first elected to the House in 2012 and re-elected last year.

Republicans currently hold a majority in the Arkansas House and Senate with 63 of the 100 seats in the House. The current makeup of the state House is 63 Republicans, 36 Democrats and one Independent.