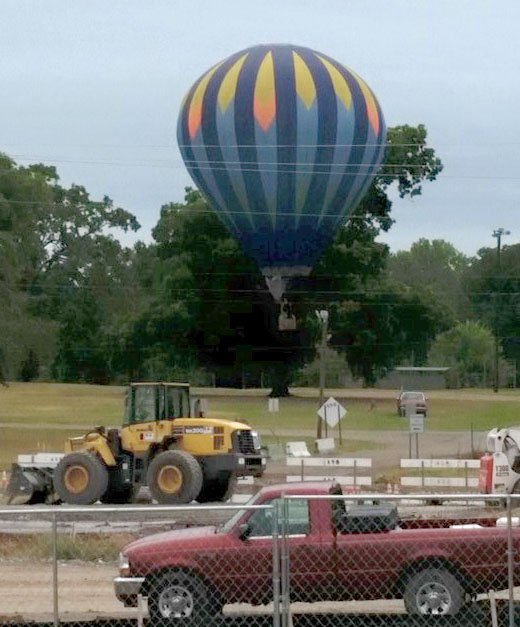 A hot air balloon believed to be the same one that later landed in a west Little Rock neighborhood takes off Friday, Aug. 21, 2015, from a lot just north of the Arkansas State Fairgrounds. ( Deb Crow )

A hot air balloon made a landing in a west Little Rock neighborhood Thursday morning after entering airspace where its pilot should have been in contact with air traffic controllers, officials said.

Lynn Lunsford, a spokesman for the Federal Aviation Administration, said the unidentified pilot landed the balloon around 8 a.m. He didn't have an exact location, but a KARK-TV report from an eyewitness placed it on a cul-de-sac on Sawgrass Court between Rahling Road and Hinson Road.

In an email, Lunsford described it as a "normal, non-emergency landing in a neighborhood."

"FAA inspectors were there to meet the pilot because he had not been in radio contact with air traffic controllers, which is required in that airspace," Lunsford wrote. "The inspectors helped him deflate the balloon while he waited for his ground crew to arrive. We'll be meeting with the pilot later to discuss the circumstances."

The balloon appeared to have taken off from a lot just north of the Arkansas State Fairgrounds in Little Rock. The fair posted on Facebook a photograph of a balloon taking off Friday morning that looked the same as the one that landed in the neighborhood.

Deb Crow, an administrator with the Arkansas State Fair who took the photo, said the pilot didn't have any contact with anyone there, but she watched the balloon take off and then head west.

Little Rock Fire Department Capt. Edwin Woolf said he wasn't aware of any response from his agency related to the hot air balloon. But, he said, at one point while driving on Interstate 630, he saw it "really low" in the sky southwest of Immanuel Baptist Church, which is located northwest of the Big Rock Interchange.