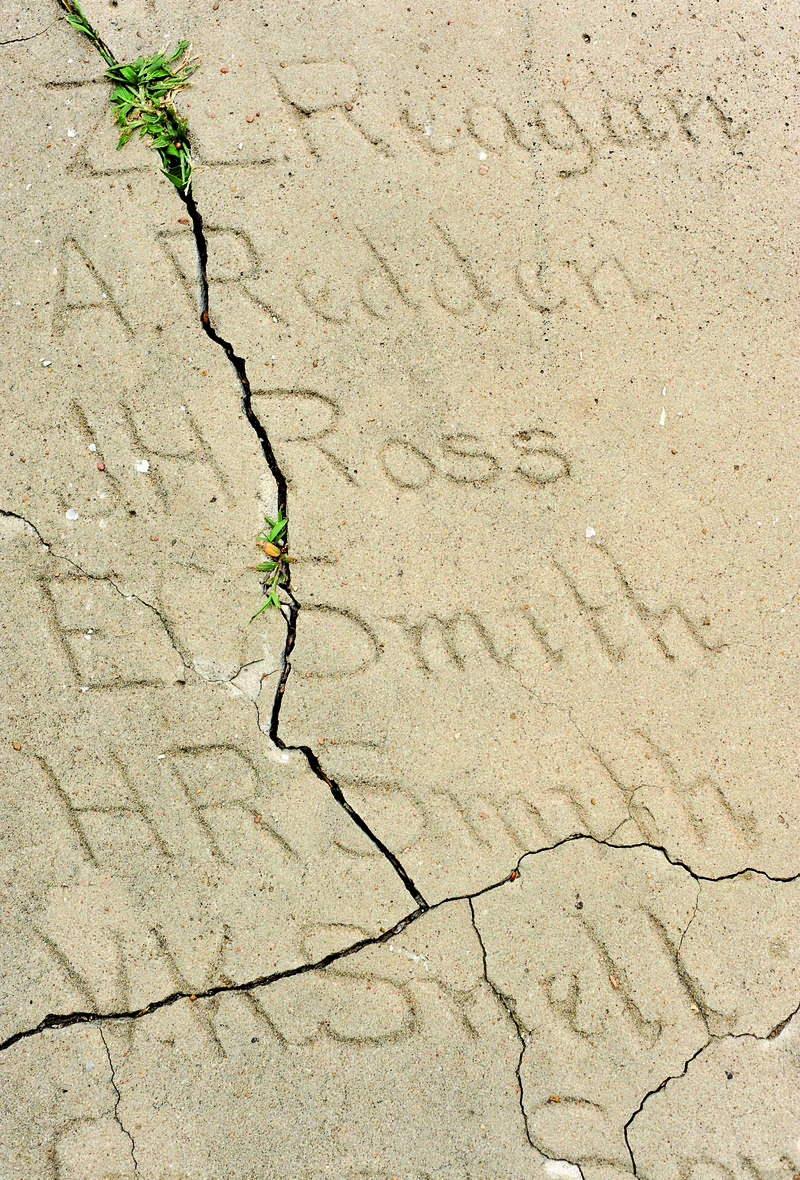 Grass grows through cracks in the hand-inscribed 1907 section of the Senior Walk at the University of Arkansas at Fayetteville. UA officials plan to replace portions for the years 1876-1924. ( Andy Shupe)

FAYETTEVILLE — A plan is in the works to replace the oldest part of the University of Arkansas’ Senior Walk — a section of sidewalk that contains the names of seniors in the classes from 1876 through 1924, many of which were inscribed by hand into wet concrete.

In places, the sidewalk has cracked into pieces.

“As far as putting the pieces together like a big jigsaw puzzle, that’s a difficult task to do,” said Jay Huneycutt, UA director of planning and design.

The Fayetteville campus is unique because it has the names of the vast majority of graduates — about 170,000 of them — in sidewalks that wend for 5 miles through campus.

Huneycutt said the oldest part of Senior Walk needs to be repaired or replaced. The university has studied the problem for a couple of years, with input from a consulting company.

“We’ve been looking at it for some time now,” he said. “Graduates come up for a football game, and they see their grandfather’s name is falling apart and they want to know what our plan is.”

Huneycutt said the recommended solution is to replace about 300 feet of Senior Walk that stretches from the front door of Old Main, the university’s oldest building, east toward Arkansas Avenue.

Under the plan, the concrete sidewalk would be replaced with granite, and the names would be sandblasted into place before the sidewalk is installed. Huneycutt said granite will last three or four times longer than concrete — at least a couple of hundred years. The granite paving would be about 4 inches thick and 7 feet wide.

The cost would be about $500,000, which would be funded through grants and private donations, Huneycutt said. A decision on the project won’t be made until a new chancellor is hired.

The work would require removing several cracked sections of sidewalk along with other sections that look relatively good in comparison.

But those options have drawbacks, said Huneycutt. Concrete won’t last as long as granite. And replacing only parts would leave a patchwork of different types of sidewalk — varying from one year’s class to the next. Meanwhile, the old sections that are left alone would continue to decay, he said. Using concrete and sandblasting would, however, cost about half as much as using granite.

“We are suggesting that replacing the first 50 years of the senior walk with granite paving (etched names) would be an appropriate response to trying to respect and maintain one of our unique university traditions,” Huneycutt said in an email.

Charles Leflar, a UA accounting professor, doesn’t like the idea of replacing the old sidewalk. The name of his father, Robert A. Leflar, is inscribed by hand in the class of 1922 section.

“I would be surprised if they’re considering that because the handwritten names are quite charming,” Leflar said. “Senior Walk is a wonderful institution. Our family has several dozen names inscribed in it, including aunts, uncles, cousins, mine, my children, as well as my father.”

Leflar said the names in some class years, including 1922, are in relatively good shape.

“I would hope the undamaged ones are left alone,” he said. “There’s that old saying, ‘If it ain’t broke, don’t fix it,’ both literally and figuratively.”

Another change was made in 1925. That year, the university began putting the names of graduates in the sidewalk instead of seniors, said Charlie Alison, a UA spokesman.

One aspect of this change is that former U.S. Sen. J. William Fulbright’s name appears in the sidewalk twice — in 1924 when he was a senior and 1925 when he graduated.

Stuart Fulbright, a landscape architect and great-nephew of J. William Fulbright, said he doesn’t like the idea of spending $500,000 on a new granite sidewalk.

“I think $500,000 is an inappropriate amount of money and that they probably should just pour concrete and use the current system,” Fulbright said. “Concrete was good enough for the old-timers. Why not use it again? They were frugal Arkansans and would shake their heads disapprovingly at us for making a walkway out of granite and spending that kind of money.”

Fulbright said the money could be better used for scholarships or planting native Arkansas trees along the walkway, which was the practice in the early days of the Senior Walk.

Huneycutt said they’ve discussed the possibility of preserving some sections of the sidewalk after they’re removed, perhaps in a museum.

Ralph Wilcox, National Register and survey coordinator for the Arkansas Historic Preservation Program, said he hadn’t heard of the plan for Senior Walk.

“Obviously, we’d want to try to find some way to preserve them somehow, even if they take them out,” Wilcox said.

The hand-inscribed sections of sidewalk look considerably different from the modern sections.

In 1987, the university began sandblasting the names into the sidewalk with a UA invention called a Sand Hog, Alison said. There was a backlog at the time, so the Sand Hog was used to sandblast several years’ worth of names whose graduations were before 1987.

The 1876-1924 section contains fewer names than the class of 2014, Huneycutt said. University workers are almost finished sandblasting the names of 5,400 graduates of 2014 into a sidewalk that wraps around the Walton College of Business. Then they’ll start work on the class of 2015.

Huneycutt said lettering in the granite would more closely resemble the campus sidewalks done in the mid-20th century, before the Sand Hog was invented.

Huneycutt said there’s a concrete foundation 4-6 inches thick underneath some of the cracked sections of sidewalk. When the sidewalk concrete was originally poured, the top inch was applied last, and it’s that part that’s cracking, he said.

Senior Walk was begun by the senior class of 1905, according to a history of the sidewalk compiled by the University Relations office.

Two years — 1887 and 1895 — aren’t represented in Senior Walk because of changes in the academic calender that resulted in no students graduating those years.

In 1956, the original block showing for the class of 1905 had become so weathered and cracked that the university replaced it. As a result, the oldest section of Senior Walk is the one representing the class of 1904.

The most damaged section appears to be the one for the class of 1906, in which a couple of names of seniors are missing, along with the “6” in the year.

Other sections of Senior Walk also show considerable cracking, perhaps because of the type of concrete used. Spiderweb cracks run through the sections for 1933 and 1934, while the older 1932 section looks fine. There are no immediate plans for those sections.

Alison said more than 99 percent of UA graduates are represented in the sidewalk.

During the late 1970s and 1980s, a fee was charged for graduating seniors who wanted to have their names in Senior Walk, so there may be students from that time period who graduated but who chose not to pay to have their names appear in the walk, he said.

Also, some students asked, under the Federal Educational Rights and Privacy Act, that none of their information be released. Until recently, when students did that, it meant their names wouldn’t be in the sidewalk, Alison said. But now, when they sign up for graduation and commencement, students are asked if they want their names on the sidewalk.

The granite sidewalk is being recommended by the university’s facilities management department and DCI — a team of civil engineers, landscape architects, planners and surveyors that has been working on the project. DCI has offices in Fayetteville and Little Rock.

The sidewalk decision will ultimately be made by an executive committee of the Fayetteville campus chancellor and vice chancellors. UA is now searching for a chancellor to replace G. David Gearhart, who retired at the end of July.

Interim Chancellor Daniel Ferritor said he has been briefed on the plan and believes that any change should be evaluated to make sure that the sidewalk is safe, functional and “preserves the great tradition and respect that Senior Walk symbolizes for its graduates.”

Huneycutt said he thinks a decision will be made before the end of May.

The proposed sidewalk work would go along with restoration of the entryway to Old Main, said Huneycutt. Work on the building’s portico will begin this year.

The portico project will cost about $900,000, with $700,000 of that coming from a grant from the Arkansas Natural and Cultural Resources Council. About $200,000 in UA funds will be used to complete the project, said Huneycutt.

According to the grant proposal, all four limestone columns are cracked and will be replaced, along with other parts of the portico. Limestone steps and a landing that were installed in 1981 will be replaced with sandstone, which was the original material for the steps.

The inscribed cornerstones, which are damaged, will be replicated, and the original limestone inscriptions will be preserved and displayed inside Old Main. One of the inscriptions reads “The Arkansas Industrial University, Founded in 1871.”

Huneycutt said cracks in the steps and columns are to be expected in a building that was completed in 1875. The cracks are not the result of any geological shifts over the past 140 years. When Old Main was restored in the 1980s, an effort was made to see that it lasts as long as possible. Plans for the building’s restoration showed an extensive amount of concrete underpinning with associated drainage, Huneycutt said.