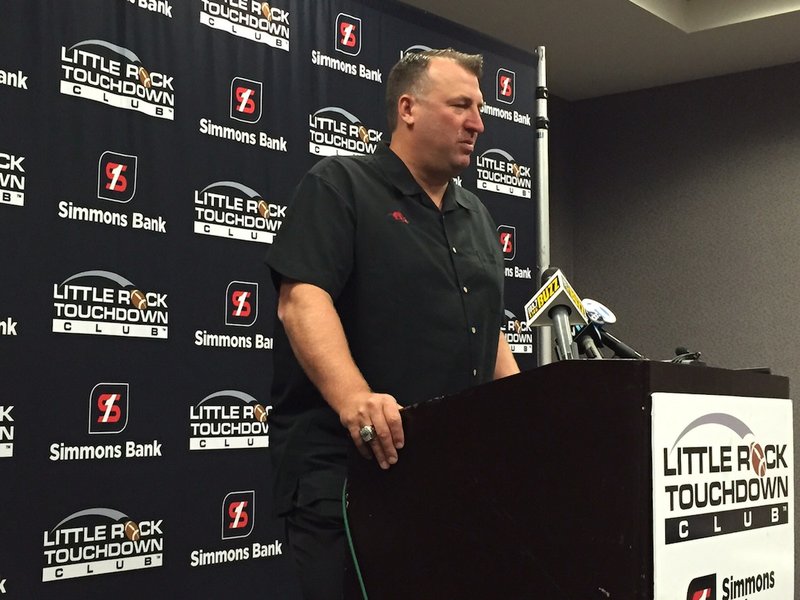 Arkansas coach Bret Bielema addressed a sold-out meeting of the Little Rock Touchdown Club on Monday, speaking on prospects for the coming season.

Bielema said the team's efforts have improved since last season.

"We look like a [Southeastern Conference] football team, and we're beginning to perform like it. Began to act like it a little bit at the end of last year, and I think it's only been enhanced since then," he said.

Part of that effort, he said, comes from a challenge he is working with the team to overcome: Getting his players to think alike.

"You don't know what you don't know," Bielema said, adding that no matter where a player comes from, he and teammates have to learn how to adapt and become unified.

"Those kids are doing things that they know we want them to do without asking, and that's probably the No. 1 thing that gets me excited," Bielema said.

Bielema said Week 6 in October will have the Razorbacks up against "one of the toughest environments in college football" at the University of Alabama.

"The thing that we try to stress to our guys is, what we do in Week 3 and Week 4 on a Tuesday night, Wednesday night and a Thursday night, and specifically on Saturday night, is going to have a great effect on where you are in Week 6," he said.

Bielema also spoke on hardships and highlights from last season, including a victory over Louisiana State University in which the Razorbacks won 17-0 last November.

To see the faces of the players after that LSU win was "magical," he said.

Bielema said other moments last fall weren't as easy on the team, which ended the season 7-6, 2-6, at No. 7 in SEC play.

In a preseason poll released Sunday, the Associated Press ranked the Razorbacks at No. 18.

Country musician Justin Moore spoke to the full room of attendees before Bielema took the stage at the Little Rock Marriott.

The Razorbacks' fall football season starts at 2:30 p.m. Sept. 5 against the University of Texas at El Paso. The game will be televised on ESPNU.