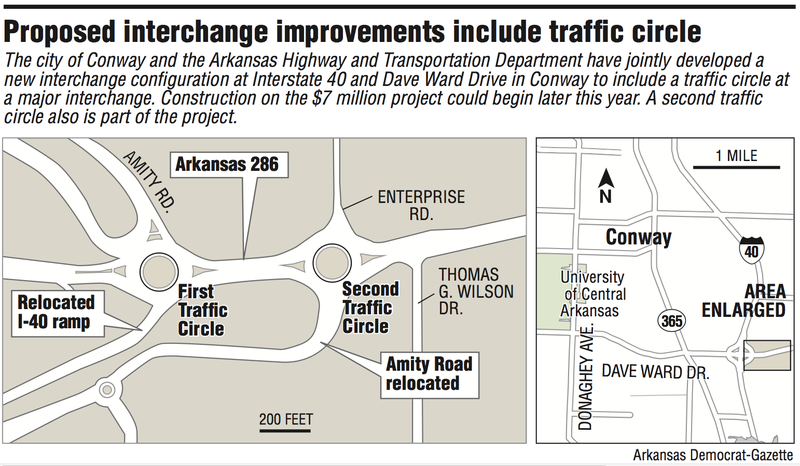 This graphic shows the new interchange configuration developed for Interstate 40 and Dave Ward Drive in Conway. The configuration includes a traffic circle.

The Metroplan board of directors on Wednesday approved fast-tracking funding for a new project that will include the first roundabout at a major interchange in Arkansas.

The roundabout technically isn't at the end of the Interstate 40 exit ramp at Dave Ward Drive in Conway because the ramp comes off a special lane separated from the interstate main lanes to allow safer and slower speeds for vehicles accessing the exit ramps.

The exit is currently split in two, with one lane for traffic headed east on Dave Ward and another for motorists wanting to go west on Dave Ward.

The city is contributing $2 million toward the project. Townsell said that money will be a combination of proceeds from the city's one-quarter percent sales tax devoted to street projects and from its turnback, or share, of the temporary one-half percent statewide sales tax voters approved in 2012 to help finance a $1.8 billion road construction program over the next 10 years.

The Arkansas Highway and Transportation Department encourages cities and counties to contribute local money to state projects as a way to stretch state and federal dollars for road and bridge construction and typically gives those projects a higher priority.

"This is another example" of the partnering program in central Arkansas, said Jim McKenzie, the executive director for Metroplan, the long-range transportation planning agency for the region.

The agency's board approved a resolution increasing amount of money for the project to $7 million in fiscal 2015, which ends Sept. 30, for the federal government. The agency's transportation improvement plan had initially penciled in $200,000.

"It is on a fast time frame," another agency official, Casey Covington, told the board. "[The Highway Department] would like to begin construction later this year if possible."

The city already has built more than a dozen roundabouts within the city limits, the first being built on the campus of Hendrix College almost 10 years ago.

The modern roundabout-- a circular intersection with specific design and traffic-control features -- is seen as a safer alternative to the traditional four-way intersection that controls traffic with stop signs or traffic signals. Rather than stopping, vehicles at traffic circles simply yield at times, travel at a slower speed and keep moving. There are no left turns; all entries to and exits from a circle are made to the right.

The beauty of the design, experts say, is that it is efficient at peak traffic times -- in some cases, all but eliminating long lines of idling vehicles at traffic signals or stop signs. It also is safer than a standard four-way intersection, with fewer potential conflicts between vehicles.

But Townsell acknowledged Wednesday that the proposed roundabout at I-40 and Dave Ward, also called U.S. 65B/Arkansas 286, poses challenges, given the volume of traffic involved.

About 48,000 vehicles use I-40 and about 13,000 use Dave Ward at that location daily, according to 2014 figures available from the Highway Department.

"We have been working in good faith with the Highway Department for them to take a step of faith with us toward roundabouts in this type of critical location with the traffic patterns and the interstate involved," he said.

The project is being built at an interchange poised for development. The Lewis Crossing shopping center, for one, is expected to open in the fall of 2016.

"It is a pretty aggressive project for the state Highway Department and the city of Conway," Townsell said. "These two roundabouts on a very busy road next to what will be shopping center that holds a Sam's [Club] and many other things. It's going to be a high-traffic road with roundabouts."

The road also will be frequently used by large trucks because the area is home to a major trucking facility.

"There is a lot of concern from the Highway Department and the trucking community that they can accommodate the [truck] traffic and all of the shopping traffic," the mayor said.

"The city and the Highway Department is working through some of those design issues to accommodate the traffic, to accommodate those large vehicles, as well as making a positive experience manageable and understandable for the general public," Townsell said.

Given all that, a lot is riding on the project, he said.