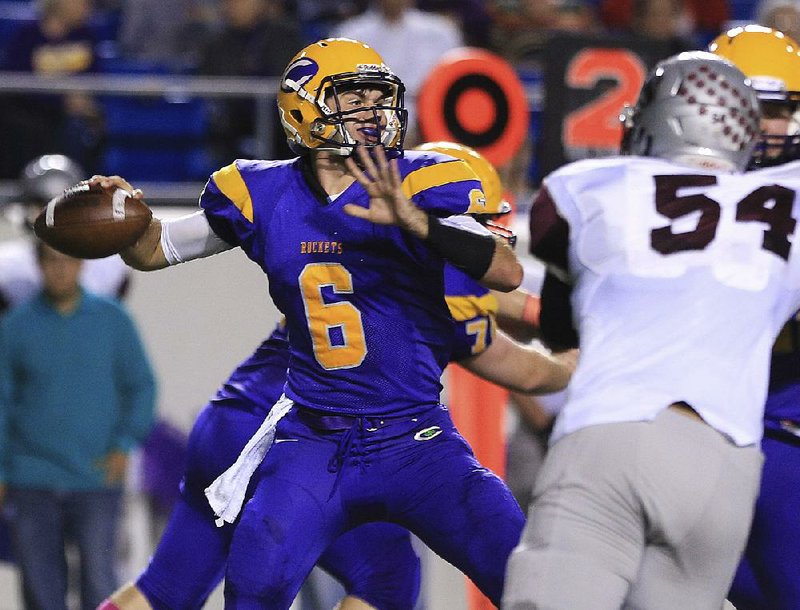 The Catholic Rockets are seeking a bigger payoff in 2015 after back-to-back five-victory seasons.

Limiting injuries and turnovers will be a key in helping them achieve that goal.

"The numbers we have, compared to the other teams we play, is about half," said Catholic Coach John Fogleman, who is starting his third year with the program. "So obviously we need to stay healthy. We have some experience back from last season, but we can't make mistakes. We had too many turnovers at inopportune times last year. And defensively, we've got a whole new secondary and they are going to have to grow up fast."

Catholic finished 5-6 last season. The Rockets knocked off Van Buren in the final week of the regular season to qualify for the postseason and played Fort Smith Northside to within 24-14 in a first-round playoff loss.

"Hopefully, we'll see a calmer presence when the game is on the line," Fogleman said. "He didn't make a whole lot of mistakes last year, but when you're the quarterback and you make mistakes, they are sometimes glaring mistakes.

"With a year experience under his belt, hopefully he'll be prepared for that situation when the game's on the line."

Fogleman said running back Lance Harville-Thomas started fast and had a good finish to the season. The coach is counting on the 6-2, 220-pound senior to be more consistent this fall.

"We have some size and we have some players who have some experience, but they need to have that experience of playing together," Fogleman said. "We've got to get them together and on the same page."

"He's one of our stronger players," Fogleman said. "He can penetrate and get in the backfield. He runs well."

Catholic's strength defensively should be its linebackers. Seniors Forrest Dunkum, 6-1, 190, and Bryce Ward, 5-10, 185, are returning starters from last season.

Fogleman said senior linebacker/running back Josh Pinter, 5-11, 190, "needs him to be tough against the run."

The Rockets' inexperienced secondary may be put to the test early, although Fogleman said senior Drake Enderlin, 6-2, 185, "had a great effort" in Catholic's benefit game earlier this week.

Fogleman said both of his teams have started slow in both in his seasons at Catholic, but they managed to improve each week. This season, he said his team's goal is to return to the postseason and advance further into the playoffs.

"We've just got to take that next step," Fogleman said. "We've got to get over that hurdle of the first round. Some things are going to have to go our way. We have to stay healthy, improve every week and we've got to create some breaks for ourselves."

Catholic starts the season on the road at North Little Rock on Sept. 4.