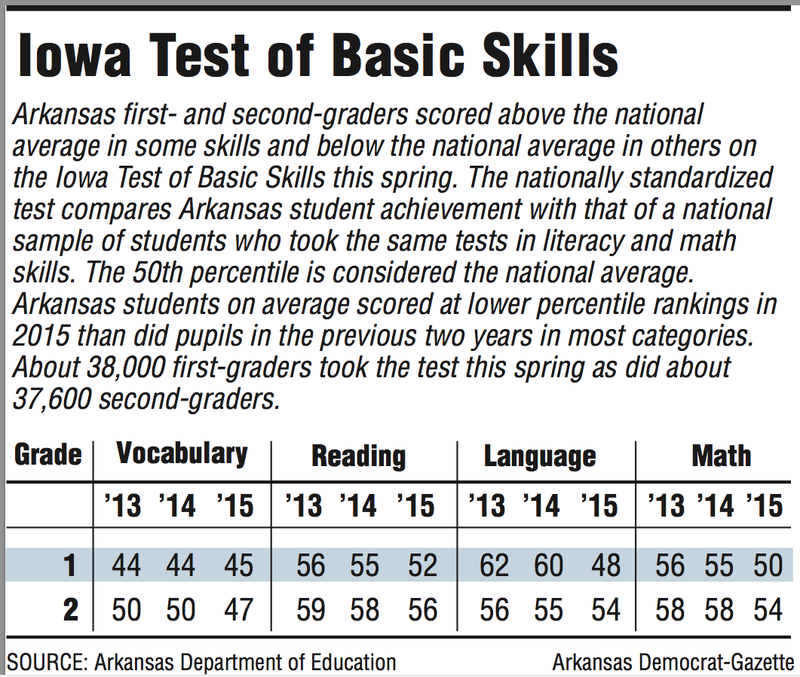 This chart shows how Arkansas first- and second-graders scored compared to the national average of 50 in the Iowa Test of Basic Skills. (Arkansas Democrat-Gazette / Arkansas Department of Education )

Arkansas' youngest test-takers scored lower on the 2015 Iowa Test of Basic Skills than did pupils in past years.

But the state results remained above national averages in most categories.

The Iowa tests are nationally standardized tests that compare the achievement level of Arkansas students with a national sample of students who took the same tests.

The Arkansas Department of Education released the most recent Iowa test results for first- and second-graders along with results from the Arkansas Benchmark and End-of-Course science exams -- all administered during the 2014-15 school year.

The drop in the Iowa scores and seventh- and 10th-grade science results came as Arkansas continued to use the Common Core State Standards in kindergarten through 12th grades. The common set of standards in math and English/language arts was adopted by Arkansas and most other states in 2010 to be more academically rigorous than earlier standards.

Those standards, which are supposed to be the basis for more challenging classroom instruction, have not produced higher achievement results on the Iowa tests in recent years.

Gary Ritter, founder and faculty director of the Office for Education Policy at the University of Arkansas at Fayetteville, cautioned against jumping to conclusions about the Common Core standards and the tests.

"I don't want to make too much of the results," Ritter said Friday when asked about how to interpret the declining achievement levels. "It's possible that in a year where we are transitioning still to new standards and transitioning to new tests [at the upper grades], what we are seeing may be just a decreased emphasis on the importance of that assessment.

"So it's possible that kids aren't learning any differently in any of those grades. There might be an assessment-based reason [for the drop], rather than any change in the true knowledge that underlies the kids' scores," he said.

Arkansas used the new online Partnership for Assessment of Readiness for College and Careers, or PARCC, exams in grades three through 10 this past year. The PARCC exams, developed by a coalition of states based on the Common Core State Standards, are being replaced this school year with a different testing program, the ACT Aspire exams, for grades three through 10. State education leaders are not expecting to receive the 2015 PARCC exam results until October or November.

The Arkansas Department of Education will begin a review of the Common Core State Standards later this year with plans to implement any revisions -- including a name change -- in 2016.

In addition to a lack of emphasis on the test, this year's Iowa test results may also reflect a change in the national sample used as the basis of comparison.

Debbie Jones, assistant commissioner for learning services for the Arkansas Department of Education, and Hope Allen, the department's director of student assessment, were both away from their offices Friday and not available to talk about the test results until early next week.

Unlike Arkansas' formerly used Benchmark and End-of -Course exams in math and literacy and the PARCC exams, the Iowa tests and state science tests are not used to evaluate school performance for state labels, penalties or awards.

The declines in the second-grade scores in 2015 compared with 2014 ranged from a 1-point drop on the language arts test to a 4-point drop in math.

Laura Bednar, the deputy superintendent for learning services in the Pulaski County Special School District, said she and her staff will analyze all of the standardized test results from last year, the curriculum and the standards for gaps between the standards and the different kinds of tests.

"What we are doing is looking student by student and school by school, looking for patterns," Bednar said. "We have a lot of data available but with the priority of getting schools opened, we have not finished looking at it to the degree we intend to."

On the 2015 Benchmark tests, 60 percent of fifth-graders and 34 percent of seventh-graders scored at proficient or advanced levels this past spring.

A student who scores at a "proficient" level on the science tests is recognized as achieving at grade level or demonstrating mastery of the content.

Fewer than half, or 47 percent, of the End-of-Course biology test-takers scored at proficient or advanced levels last spring. That duplicated the percentage of proficient and advanced students in the previous year.