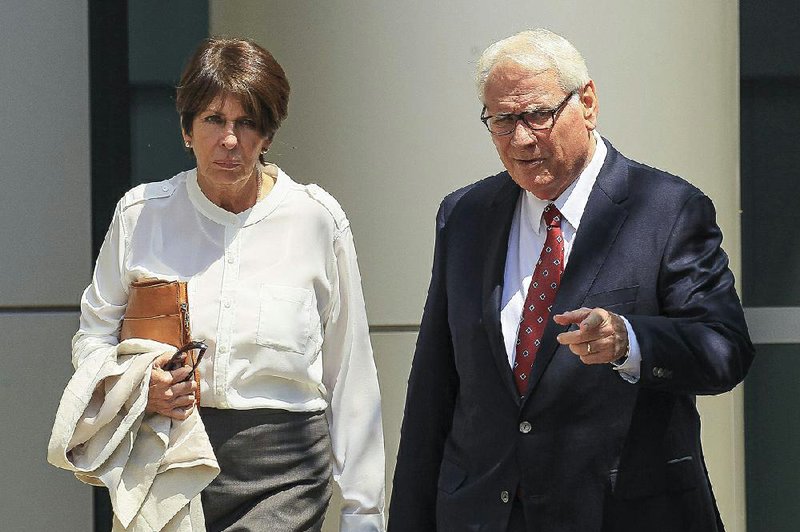 After three hours of debate capped by a tearful apology from former state Treasurer Martha Shoffner, a federal judge sentenced the 71-year-old Newport woman to 2 1/2 years in prison Friday for accepting $36,000 over three years to officially steer a substantial amount of the state's bond business to a broker friend. 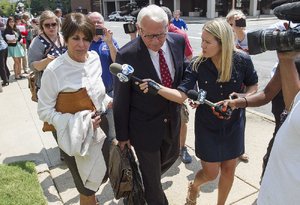 Photo by Benjamin Krain
Former state Treasurer Martha Shoffner and her attorney Chuck Banks are questioned by reporters as they leave federal court in Little Rock after Shoffner’s sentencing Friday.

Shoffner was ordered to report to prison by Nov. 2. She also was ordered to pay $31,980 in restitution to the state -- the amount of bribe money she accepted from bond broker Steele Stephens between May 2010 and May 2013, minus some cash she turned over to FBI agents during her May 18, 2013, arrest.

Even though the money was Stephens' personal money, and not the state's, prosecutors successfully argued that because the bribery involved state government, the state was entitled to restitution.

Shoffner's attorney, Chuck Banks of Little Rock, argued that the second-term treasurer, who resigned after her arrest, was "very naive and gullible," which led to her "terrible mistake of judgment" that constituted an anomaly in a lifetime otherwise devoted to public service. Shoffner previously served three terms as a state representative from Newport.

Banks said that instead of accepting the cash so she could pay rent on a Little Rock apartment and avoid daily commutes between her office at the state Capitol and her home three hours away, Shoffner should have resigned her elected position because she couldn't afford it. Shoffner was paid just over $50,000 annually as treasurer.

Banks said that in the court of public opinion, Shoffner "has been forever vilified," but "she still loves community service," and her actions were never found to have cost the state any money. Indeed, he said, the trades made by Stephens netted the state more than $26 million, and the Arkansas treasurer's office, under Shoffner's leadership, was one of only five in the country to always carry a surplus.

Standing at a lectern beside Banks and in front of several rows of friends and family members in the courtroom gallery, Shoffner acknowledged that her actions were illegal, unethical and a breach of public trust. She apologized to her deceased parents for bringing shame on the family and said through tears, "To everyone in this courtroom, I am very deeply sorry."

Shoffner was convicted by a federal jury March 11, 2014, after four days of testimony, on six counts of bribery, one count of attempted bribery and seven counts of extortion. Each count concerned a separate $6,000 cash payment she accepted from Stephens. The attempt charge stemmed from $6,000 in FBI money that Stephens gave to Shoffner in an apple-pie box on the day of her arrest while secretly recording the transaction for the FBI.

While Banks sought a sentence that wouldn't involve prison time for Shoffner, prosecutors asked the judge to sentence her to between 63 months and 78 months (between five and 6 1/2 years). That is the amount of time suggested by federal sentencing guidelines if the amount of loss was deemed to be the $36,000 in cash payments she received from Stephens, rather than the $1,714,889.35 in commissions that Stephens received for bond transactions with the state during the three-year "bribe period."

Prosecutors argued in pre-sentencing memorandums that U.S. District Judge Leon Holmes should consider 15 to 19 years the official guideline range for sentencing, based on the amount of commissions Stephens received. U.S. Attorney Chris Thyer said after the hearing that his office was never seeking a sentence that long for Shoffner.

In court Friday, Assistant U.S. Attorney John Ray White said prosecutors would be satisfied with a sentence in the five-to-six-year range, but they didn't agree with Banks that Shoffner should be allowed to serve her time through a combination of a halfway house and home confinement, without any time behind bars.

White, chief of the criminal division at the U.S. attorney's office, argued that Shoffner damaged the integrity of her elected office and undermined the honor of public service. Whether she is gullible or not, he said, she carried out her secret plan with Stephens "with zeal," ordering her staff to carry out orders that benefited Stephens over about eight other brokers and using a "drop phone" to communicate with Stephens privately.

White said her guilty motive was obvious when she threw the phone from a bridge into a waterway when she learned the FBI was investigating.

Holmes eventually determined that the amount of loss was $939,389 -- the difference between the amount of commissions Stephens received during the bribe period and the amount received by the broker with the second-highest commission. Stephens was working for St. Bernard's Financial Services of Russellville at the time, but has said the company didn't know about the bribes.

Still, Holmes agreed that the sentence range suggested by the guidelines for that amount of loss was too steep in Shoffner's case, where the possibility of her committing another crime "is as close to zero as it could be," and where there is no need to protect the public. He noted that a strictly probationary sentence might prompt a prosecution by state officials, and said that Shoffner, at age 71, would be better off in a specific federal prison in Fort Worth, which has a hospital attached, than in a halfway house.

Holmes also said he has struggled for some time to understand "how all this relates to the principle of federalism," noting that the case involves the treasurer's office of the state -- a sovereign entity. While acknowledging that federal jurisdiction of the case was proper, Holmes nonetheless questioned the decision to prosecute the case in federal court instead of state court. He noted that the state could better determine the seriousness of the crime, and thus the penalty, while he couldn't see any impact on federal interests, such as interstate commerce.

Holmes said he did some research and discovered that the state charge of abuse of public trust, a Class D felony punishable by up to six years in prison, "clearly fits this crime and is exactly on point."

Thyer said later that his office makes decisions every day, in consultation with state officials, on whether cases should be prosecuted in federal or state court. He said the distance between his federal office and Shoffner's state office created more of an appearance of neutrality, noting that some observers could have questioned the state's ability to investigate itself.

While some have criticized prosecutors for granting Stephens immunity to help prosecute Shoffner and testify as the star witness against her, Thyer said outside the courthouse Friday that he didn't have much of a choice despite Stephens' participation in the crime. Thyer said he needed Stephens' cooperation and, because she was an elected official, he considered Shoffner the more culpable of the two.

The state Securities Commission has fined Stephens $20,000, which he has so far refused to pay, for violating regulatory laws through some of his dealings with the treasurer's office. Stephens was stripped of his broker's license in April.

Shoffner met Stephens, now 54, through his father, Steve Stephens, 85, who also was from Newport and was a lifelong friend of the Shoffner family. Stephens acknowledged from the witness stand that he earned $2.5 million in commissions through 85 trades he conducted on behalf of the treasurer's office between July 2009 and December 2012 -- including a period before he began paying Shoffner.

Stephens was a reluctant star witness, saying he and Shoffner never discussed a particular plan for payments in exchange for bond business. He indicated they had an unspoken agreement to help each other, although they did agree on $1,000-a-month payments, in six-month increments, to cover her rent on a Little Rock apartment.

The arrangement began when a downtown building in which Shoffner had been living rent-free, in exchange for watching over it, was foreclosed on. Stephens said Shoffner first suggested that he buy the building and allow her to continue living there rent-free, but he decided against buying the dilapidated building, instead offering to pay her enough to keep an apartment in Little Rock.