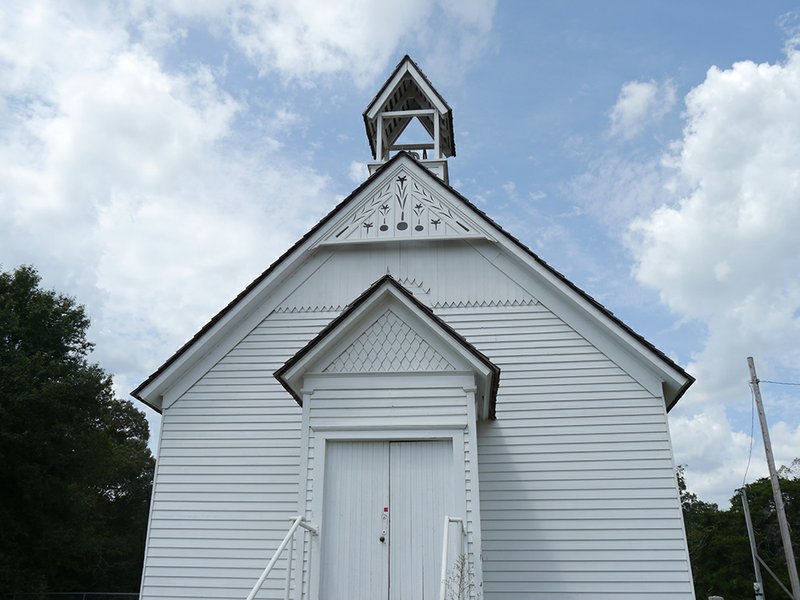 Smyrna Methodist Church is the oldest documented church in Arkansas. The church has recently undergone a restoration.

If you aren’t looking for the small, white church building that sits in the bend of Arkansas 36 and Jaybird Lane near Center Hill, you might miss it. Smyrna Methodist Church doesn’t exhibit the grandeur of many of the newer places of worship in White County; however, what the church lacks in opulence is more than made up for in historic significance.

Smyrna is the oldest documented church building in Arkansas and is among five known antebellum churches still standing in the state. Thanks to the collaborative efforts of the White County Historical Society, the Searcy Arts Council, private donors and grants from the Arkansas Historic Preservation Society, Smyrna has undergone a massive restoration in recent years.

It was during the first phase of the project, referred to as “the Smyrna Liftoff,” that an unusual source was found to pinpoint the date of Smyrna’s construction. Bill Leach of the Historical Society recalled that when the church was raised off the ground to reinforce the substructure, a white oak stump was discovered underneath the building.

David Stahle of the University of Arkansas Tree Ring Laboratory, who is renowned in dendrochronology, or tree dating, visited the site and took core samples from the stump. He determined that the tree was cut in 1856.

“At that time, logs were cut in the spring and left to cure over the summer months,” Leach explained. “That would likely put the start of construction in the fall of 1856.”

“It’s a beautiful little building,” Leach said of Smyrna. “It shows where we came from and is a remembrance to our history. There aren’t many more little one-room church buildings.”

In the first half of the 19th century, church buildings were far less prevalent than they are today, and it was necessary to build “union churches,” in which several religious groups came together on Sunday mornings. Based on a schedule, each group would have a turn at being in charge of the sermon.

One union church was located near what is now known as Center Hill, on the outskirts of Searcy. Baptists, Presbyterians and Methodists rotated services, with the fourth Sunday open to other religious groups.

In that case, “swarm” was another way of saying that the Methodists were going out on their own, and shortly thereafter, Smyrna Methodist Church was born.

There wasn’t any fanfare at the end of the final service at Smyrna, recalled Terry Cofer, who was a member of the church at the time.

“We just closed the doors and started to Grace the next Sunday,” he said. A display case at St. Paul United Methodist Church still holds relics from Smyrna, including the pulpit Bible.

The long transformation Smyrna has undergone to regain its former beauty started with stabilizing the foundation. Other phases of the project have included replacing the belfry, rebuilding the chimney and removing the metal roof in favor of cedar shake shingles that more closely resemble photos of Smyrna’s earliest days. Leach pointed out that one of the most distinctive features of the building is the use of “nine over nine” windows.

“At that time it was difficult to transport large panes of glass without them getting broken,” Leach said. “That’s why we see the use of nine small panes of glass.”

Preserving Smyrna has meant restoring the building, but has also kept the church’s lore alive. Leach recalled that one story tells of a long-ago Sunday when one of the founding members, Louis Armstrong, was leading the congregation in prayer from the pulpit, when his son came walking home from the Civil War.

The restoration of Smyrna’s facade has made visiting the small church like taking a step back in time. It is easy to block out the noise of the nearby busy highway and imagine mourners gathered in Smyrna’s cemetery to bid farewell to a loved one, or a happy couple emerging from the church to embark on a life together.

In fact, Smyrna is still available as a wedding destination for couples in the county.

“It is a quaint, beautiful little church,” said Terri Brannon, program coordinator for the Carmichael Center in Searcy. “We have little girls who grew up here and say they always wanted to have their weddings there.” The rental fee for Smyrna is $150 for four hours, with a $100 refundable deposit for cleaning up after the ceremony.

The building was donated to the city of Searcy in 1997, and donations are still accepted for work on the interior of the church. Plaques commemorating private donations have been placed on windows and pews throughout the interior. Plans call for one day installing central heat and air for the structure.

For more information on how to make a donation to the Smyrna restoration project, call the White County Historical Society at (501) 278-5010.