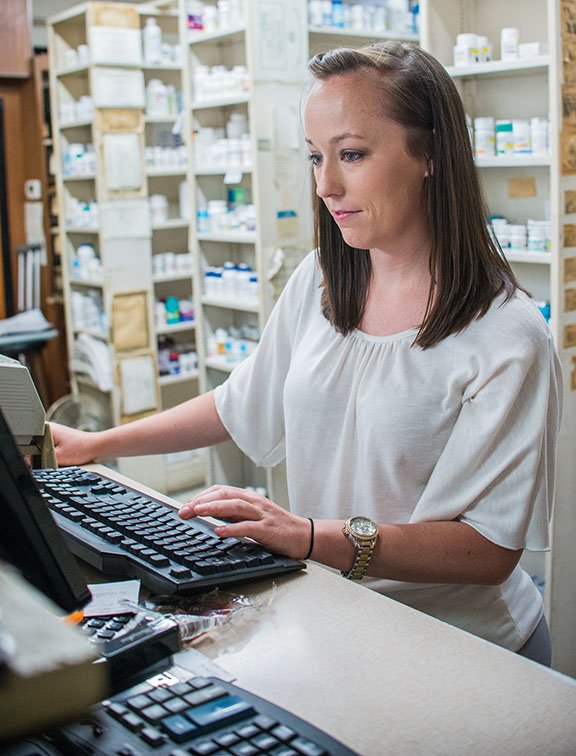 Sable Miller, the fifth generation in her family to staff Miller’s Drug Store, has called Malvern home all her life except for a brief time while attending the University of Arkansas for Medical Sciences in Little Rock. She then moved back home to Malvern to live there while she finished her degree at UAMS.

MALVERN — Miller’s Drug Store has been a staple of Malvern’s Main Street since 1890, 14 years after the city’s incorporation. The latest in the Miller succession is Sable Miller, who graduated from the University of Arkansas for Medical Sciences in Little Rock with a Pharm.D. degree in May. She is the first female in the Miller lineage to become a pharmacist for the drugstore.

In the 124 years since its beginning, the store has been destroyed and rebuilt a block away. The store has endured competitors through five generations of Millers, including a Walgreens across the street, a USA Drug a half-mile away that has since gone out of business, a Fred’s, and Young’s Health Mart, another family-owned pharmacy.

The Millers’ store didn’t start out as Miller’s Drug Store. The initial name was Rhoden and Miller. This moniker referred to the names of Dr. Rhoden and Sable’s great-great-grandfather, Dr. Lee Miller. The A-frame building on Main Street housed the store until a fire engulfed the town of Malvern and destroyed all of the buildings on Main Street in 1898.

Lee Miller’s son, James Colburn Miller, became a practical druggist, and the two reopened the drugstore a block away from the previous location. That time they called it Lee Miller and Son, and although the name has changed and additions have been built, the store remains at that location.

Lee, the founding father of Miller’s, died in 1915. With Colburn at the reins, the financial burden of the Great Depression nearly plunged the pharmacy into bankruptcy. The hardships of the time forced Colburn’s wife, Roberta, to take out a promissory note, using her inheritance as leverage, to bail out the store.

Colburn had three sons, James Colburn “J.C.” Miller Jr., Robert Miller and Lynn Miller, who graduated from St. Louis College of Pharmacy in 1941, 1950 and 1957, respectively, and assumed ownership of the store after Colburn’s death in 1952. By then, the store was more than just a drugstore and also had a soda fountain like many drugstores of that era.

Around that time, the Millers opened a second location across from Hot Spring County Hospital. But the branch store was destroyed as tragedy struck once again, this time in the form of a tornado in 1982, the same year Sable’s father and current owner, Lynn Dixon Miller, graduated from the University of Arkansas for Medical Sciences in Little Rock.

Now that Sable has graduated from college and joined her father at the store, the next chapter in the Millers’ story has begun.

Sable grew up working in the store, and nearly all of the customers’ faces are familiar to her. Some patrons have watched her grow up, and she said the best thing about the business is that the staff treats customers like family, enabling the business to still thrive on Main Street in a town of 10,000, despite three other drugstores and a Walmart Supercenter with a pharmacy.

The newly minted pharmacist isn’t daunted by the challenge of competition. She said she believes that drugstore chains and independent stores attract different patients. So it wasn’t a strain on business when USA Drug moved in down the street or when Walgreens set up shop across the street.

“I wouldn’t say it was difficult; we’ve always had the same patients,” Sable said. “When USA Drug closed, we got several of their patients, and then some still go to Walgreens, and then they’ll come back across here, or they’ll go to another independent. I think an independent pharmacy has a lot to offer patients.”

Sable has called Malvern home all her life, except when she moved to Little Rock to be closer to UAMS. Relocation didn’t suit her, though. She soon decided to move home and endured the commute for the rest of her college career.

“I’ve grown up here,” Sable said. “I’ve worked here forever. My parents were never like, ‘You have to go to pharmacy school.’ It was definitely my decision. They would have let me do whatever I wanted.”

The Millers’ attention to detail is something Sable said they take pride in. Of course it’s important that they know the patients’ medical histories, but the family places a lot of importance on knowing the patients themselves, knowing what goes on in their day-to-day lives, she said. That’s how Sable said the family believes patient care should be.

Sable said she remembers growing up with the idea that she would becomes a pharmacist, just not as a certainty. Her admiration of her father and her comfort working in the store led her to confirm that lingering thought.

“Yeah, I always kind of thought in the back of my head I would be a pharmacist,” Sable said, “but you just never know. Even when I graduated high school, that was my plan, to become a pharmacist. It was just a matter of making that happen. [My dad’s] a good pharmacist, so I definitely always wanted to be like him. I remember my grandpa working, but obviously not as much as [I remember] my dad.”

When Sable was a kindergartner, she worked in the store counting money back to customers. The business has loyal customers who go out of their way to go to Miller’s, and the store continues to attract new customers as well.

Sable has two brothers: The elder, Chaney, is a construction manager at Flakeboard America in Malvern, and the youngest, Tatum, just started his second year of college and is undecided about his career field. So Sable is next in line to run the family business, and after graduating from pharmacy school, she has entered another school, so to speak — a hands-on business school.

Her father, Lee, has been teaching her, patiently, the ways of the family’s business, passing on a tradition that dates back to Malvern’s early days. The Millers still seem to push back against the notion that there is no place for a mom-and-pop store in today’s modern climate of big business and big revenue. After nearly a century and a quarter with Miller’s drugstore in some form or fashion on Main Street, the institution shows no signs of going away.