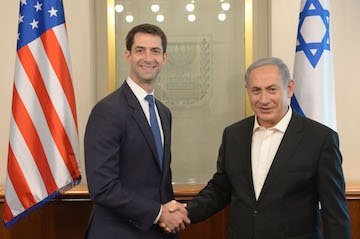 “There is no one better to discuss the impact of a nuclear Iran, both in the Middle East and in the world,” Cotton said in a statement.

Cotton, an ardent opponent of what he calls a “deeply flawed” agreement with Iran, met Netanyahu during a week-long trip to Israel.

They discussed the “special” relationship between the United States and Israel, their opposition to the deal as well as “the regional implications of the deal,” Cotton spokesman Caroline Rabbitt said.

“I will stand with Prime Minister Netanyahu and Israel and work with my colleagues in Congress to stop this deal and to ensure that Israel has the means to defend itself against Iran and its terrorist surrogates,” Cotton said in a statement.

On Sunday, Oregon's Democratic Sen. Jeff Merkley became the 31st senator to back the Iran nuclear deal, positioning supporters closer to the 34 votes required to uphold a presidential veto of a congressional resolution disapproving the agreement.

The Republican-controlled Congress has until Sept. 17 to pass a resolution rejecting the deal.