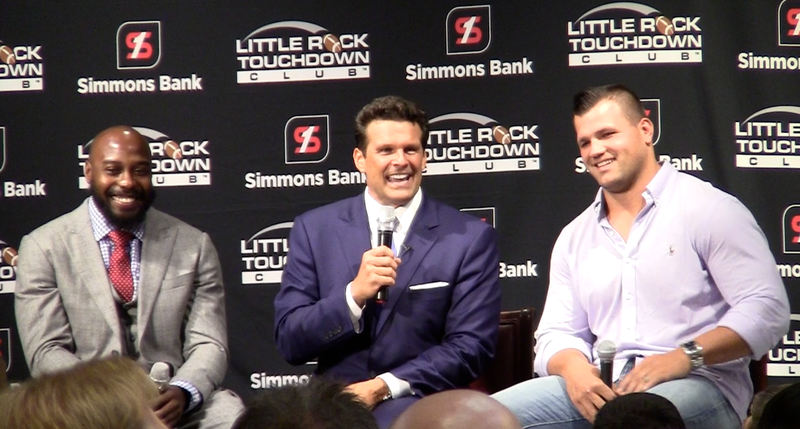 Two former Arkansas running backs spoke to the Little Rock Touchdown Club on Monday, telling stories of their Razorback years and how life has changed since their time in college.

During a question-and-answer session hosted by sports media personality David Bazzel, the Razorback alumni — Felix Jones and Peyton Hillis — spoke on challenges throughout their lives and the importance of their alma mater.

Hillis, now retired, said his career was the result of not being the "top guy," referencing being a seventh-round NFL draft pick in 2008.

"I've always had to start from the bottom and rise to the top, and I'm very proud of that just because if I didn't have the foundation that I had as a kid, I wouldn't be here today," he said.

Jones, who was drafted in 2008 to play for the Dallas Cowboys in the first round, said he lives in Dallas, actively trying out for teams as a free agent.

"I hope things happen the way I want them to happen, but you know, I'm definitely excited about what I did and where I've been," he said.

Jones and Hillis each gave their views on Arkansas coach Bret Bielema, who begins his third year this fall.

Hillis said, "I definitely think that he has it on the right track. The foundation of any football team should be the running game … and I think he's done a great job with that."

He added that Bielema is able to get talent from across the U.S. to fill voids and make the team more competitive.

"I'm excited to see what he has planned this year for the season," Jones said.