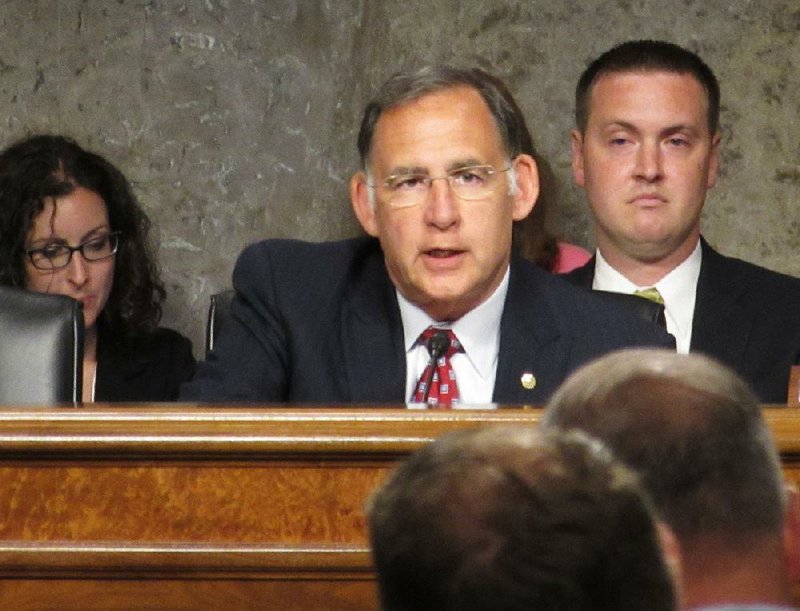 U.S. Sen. John Boozman is shown in this file photo.

At a news conference organized by a coalition of anti-poverty groups, including the Delta Grassroots Caucus, activists praised the Arkansas Republican for crafting legislation to modernize the rules governing summer meals programs.

Robert Campbell, senior policy analyst for Feeding America, said Boozman is "really addressing the major gaps in summer feeding [programs]," and his legislation would have "a huge impact."

Feeding America, a network of 200 food banks, will be able to help more people if Boozman succeeds, Campbell said. "These ... new provisions would allow us to get into those areas that are not served, that are underserved, where it's so hard for families to have access."

Under current federal rules, children generally must travel to central locations, pick up their meals and eat them before leaving.

Schools qualify as feeding centers, so it's easy to provide free breakfasts and lunches when classes are in session. But the rest of the time, many children can't get the meals because they have no transportation.

A feeding program, for example, could offer "takeout" meals or deliver them to the children's homes.

The bill also would allow states to issue electronic benefit transfer cards to provide poor families with $30 per child per month during the summer months.

Boozman said the current rules have been in place for more than four decades and place unnecessary barriers between poor, hungry children and the food they need. The current restrictions are especially harmful for children living in rural, sparsely populated areas, he said.

"The rules are pretty archaic," Boozman told the activists, who had gathered at Lutheran Church of the Reformation.

The first-term senator said there is bipartisan support for his proposal. "It's all about helping those in need, making sure that taxpayer money is getting to the places we all agree desperately need help."

The measure has 16 co-sponsors, 10 Democrats and six Republicans, including Senate Majority Leader Mitch McConnell of Kentucky.

It is awaiting action in the Senate Agriculture, Nutrition and Forestry Committee. Supporters hope to attach Boozman's legislation to the Childhood Nutrition Re-Authorization Act, when it comes up for a vote next year.

In an interview, Delta Grassroots Caucus Executive Director Lee Powell said his organization "absolutely" favors Boozman's bill, adding that it deserves support from both sides of the aisle.

"We don't see this as liberal versus conservative or Republican versus Democrat," he said.

"We're seeing, even in urban areas, there's incredible difficulty reaching children with meals during the summertime under the current programs," said Curtin, whose organization feeds thousands of poor people in the nation's capital every day.

Wednesday's news conference highlighted national support for the legislation, but the measure also is backed by anti-hunger activists in Arkansas.

"There are over 200,000 kids who qualify for free or reduced lunch during the school year," she said. "So when school is out, either for a snow day or a holiday or the summer, those kids are at real risk of not getting to eat or making bad food choices."

This summer, even with the current restrictions, Arkansas provided more than 4 million summer meals to poor children, she said.

Since 2011, Boozman has been a member of the Senate and House Hunger Caucus, a group of lawmakers dedicated to addressing the issue.

"He's very supportive of all the programs to help feed kids," Conley said.

While Wednesday's news conference highlighted the Hunger Free Summer for Kids Act, speakers also focused on other issues that they said would help the Delta region.

Several speakers called for removing trade barriers between the U.S. and Cuba, which they said would help Arkansas' economy.

Others emphasized support for allowing the passenger boat Delta Queen to resume ferrying passengers along the Mississippi River. The steamboat needs an exemption from current laws to operate overnight cruises because its design doesn't comply with current fire safety standards.