Gov. Asa Hutchinson has distributed $30.8 million from the state's "rainy-day" fund for 16 state programs and projects in his first 11 months in office, legislative records show. 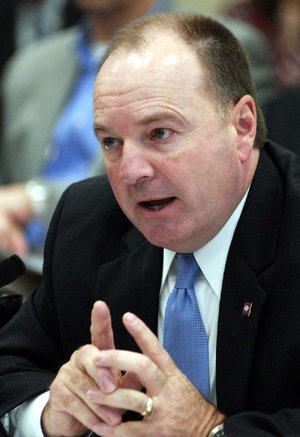 Photo by Mike Wintroath / AP
Sen. Bruce Maloch, D-Magnolia, who is co-chairman of the Legislative Council subcommittee that reviews gubernatorial rainy-day spending, is shown in this photo. 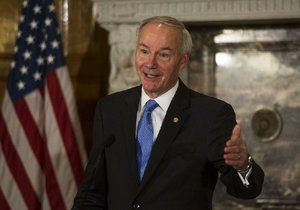 Photo by Melissa Gerrits
Gov. Asa Hutchinson is shown in this photo. 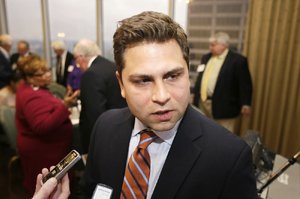 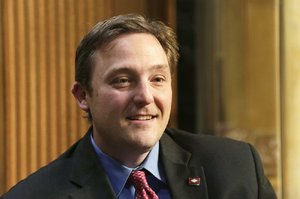 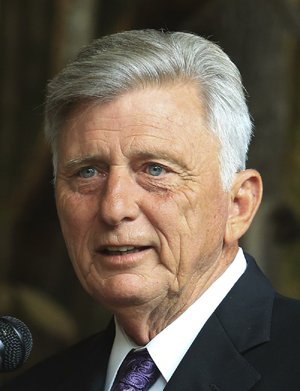 Photo by Rick McFarland
Gov. Mike Beebe is shown in this photo.

The expenditures range from $7.4 million to the state Department of Correction to provide 200 more prison beds at the Ester Unit in Pine Bluff to $200,000 to replace a cooling system at the Governor's Mansion. The Correction Department received a total $17 million of the amount spent by the governor.

Hutchinson's predecessor, Mike Beebe, released $54.9 million from the state's rainy-day fund in his final two years in office. The money went for 25 state programs and projects, including $47 million on 21 programs and projects during his last year as governor, according to Bureau of Legislative Research records.

Hutchinson said he uses the rainy-day fund for emergencies, and for special needs and his priorities that aren't included in the state's $5.1 billion general revenue budget. The governor considers his use of the rainy-day fund to be conservative, said his spokesman, J.R. Davis.

Beebe said he also spent the money on emergencies, as well as other unforeseen circumstances and when more money was needed for a state program such as prisons.

The spending by Hutchinson, a Republican, and Beebe, a Democrat, had the approval of the Legislature. Either the Legislative Council or the Joint Budget Committee must approve a governor's requests.

Sen. Bruce Maloch, D-Magnolia, who is co-chairman of the Legislative Council subcommittee that reviews gubernatorial rainy-day spending, said Hutchinson's requests have been "legitimate and prudent."

At Beebe's behest, the Legislature created the current rainy-day fund in 2009, said Kevin Anderson, assistant director of fiscal services for the Bureau of Legislative Research.

The Legislature has renewed the fund ever since. The money for it comes from the state's General Improvement Fund, which consists mostly of surplus cash, Anderson said.

Asked whether the rainy-day fund needs to consist of a few hundred million dollars as insurance in case of an economic downturn when state tax revenue would fall, Hutchinson said he would consider such a fund more of "a reserve fund."

"That's something that we have not done as a state with the view that if we are collecting more taxes than is needed, then we ought to reduce our tax collections and have tax cuts. We try to make other budget cuts," he said.

Beebe said it would be "nice" to have a rainy-day fund with a few hundred million dollars "if you had enough [money]."

But, he said, "the problem is the demands exceed the revenue. You are never going to be setting aside that much."

Most states have rainy-day funds, according to the National Conference of State Legislatures.

The General Improvement Fund also contains funds for various projects and programs favored by lawmakers, the governor or both. Those can range from a building at a university to a substance-abuse program.

Senate President Pro Tempore Jonathan Dismang, R-Searcy, said the Legislature authorized more rainy-day funds for Hutchinson in 2015 than it did for Beebe partly because the goal was to put as much as possible in that fund instead of spending the money on General Improvement Fund projects.

Hutchinson said that in the 2015 legislative session, "my objective was to restrain or eliminate [legislative] GIF," referring to legislators' pet projects for their districts.

"However, the budget process is a matter of negotiation, and we reached a good compromise with a substantial reduction in [legislative] GIF," he said.

"In the next budget cycle, I will continue to work with the Legislature on how to continue to reduce [legislative] GIF spending and to handle the surplus funds in the best interest of the taxpayers," Hutchinson said.

Much of the rainy-day money requested by Hutchinson went to address prison crowding.

Construction to provide 200 more beds for inmates at the Ester Unit started Oct. 1 and is expected to be completed in March of 2017, said Department of Correction spokesman Cathy Frye.

In addition to the $7.4 million spent to provide the 200 beds, the department has received $5.2 million to house several hundred prisoners in Bowie County, Texas, and $4.38 million for personnel services and operating expenses to open 356 beds at the Ester Unit. The department opened 184 more beds at the Ester Unit on July 1 and plans to open the remaining 172 beds on Jan. 1, Frye said.

Asked whether the Legislature adequately funded the prison system in fiscal 2016, or put tax cuts ahead of public safety, Hutchinson replied, "the funds are disbursed as needed for expanded prison space.

"The budget reflected a balance between pro-growth tax cuts and the other needs of our state," he said.

Hutchinson said he made some rainy-day requests when the general revenue budget in fiscal 2016 didn't address some needs.

For example, the Legislative Council in July signed off on Hutchinson's request for $3 million in rainy-day funds for the University of Arkansas' Division of Agriculture.

In the 2015 regular session, the division had unsuccessfully sought a $3.5 million increase in its $62.8 million general revenue budget in fiscal 2016.

Hutchinson said Thursday at the Arkansas Farm Bureau's 81st annual convention that after the Legislature enacted the general revenue budget "we recognized that we did not give sufficient funding" to the division.

He credited House Speaker Jeremy Gillam, R-Judsonia, and Dismang for urging and supporting the governor's request to distribute $3 million in rainy-day funds to the Division of Agriculture "to make sure that agriculture was adequately funded."

The Division of Agriculture used at least some of that money to add positions. So far, it has hired two county agents in Hot Spring County and one each in Crawford, Cross, Dallas, Hot Spring and Pike counties, said Mark Scott, a spokesman for the division.

Some of Hutchinson's other requests are for emergencies that come up between legislative sessions, Hutchinson said.

For example, the Legislative Council in October approved Hutchinson's request for $1.3 million in rainy-day funds for 10 counties in the Fayetteville Shale to help repair roads damaged by trucks involved in natural-gas drilling.

"That is a perfect example of one of those unanticipated emergency needs that came up after the session because there was a law passed during the session that changed the way the [natural-gas] severance tax was distributed, and it put about 10 counties in extreme shortfall," Hutchinson said.

Some of his other rainy-day requests were for items that weren't included in the state's general revenue budget in fiscal 2016, "but fit within my priorities for this state that are very well-known," he said. As an example, Davis cited the governor's request to spend $1.05 million on the Department of Human Services' Division of Children and Family Services to hire more caseworkers.

In Beebe's last year in office, rainy-day spending addressed a range of needs, such as:

• $7 million to the University of Arkansas for Medical Science for teaching needs.

• $6.6 million to the Division of Children and Family Services to match federal funds with the aim of reducing the number of children entering foster care.

• $4.2 million for the state Economic Development Commission for industry training.

• $2 million for the Governor's Distinguished Scholarship.

The state's rainy-day fund has about $41 million remaining in it, according to the Bureau of Legislative Research.

"That might have to carry us through not just the remainder of this year, but the next fiscal year as well," Hutchinson said. "I think we learn through experience as to what pops up during that time and whether this amount is adequate or whether it needs to be larger in the future."

Hutchinson said he has a list of at least 40 requests from others for using rainy-day funds. They range for capital improvement funding for schools to a road project.

"Many of them we just say, we can't do because they doesn't fit in the state's priorities or responsibilities," Hutchinson said.